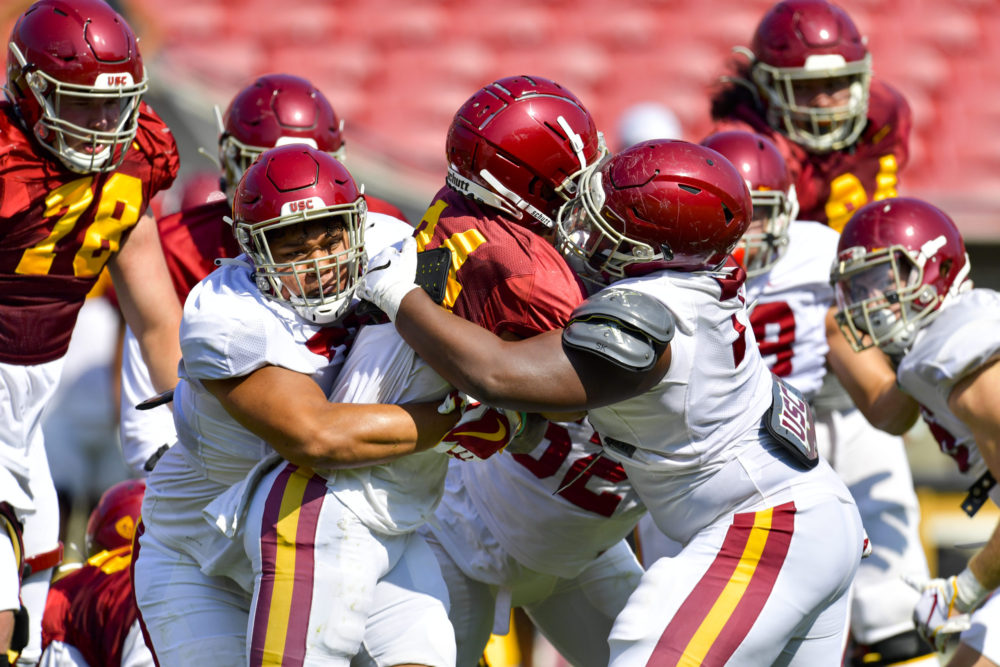 It’s obvious that college football has changed. It was only twelve years ago that USC gave up only nine points a game. I think until 2010, the first SEC team to kick a field goal was automatically awarded the victory.

And now, college football’s greatest coach, and one of the great defensive coaches of all time, has thrown in the towel: “It used to be that good defense beats good offense. Good defense doesn’t beat good offense anymore…. That’s not the way it used to be. It used to be if you had a good defense, other people weren’t going to score. You were always going to be in the game. I’m telling you: It ain’t that way anymore.”

New offensive styles are clearly a big part of the issue. Saban noted how the run-pass option (RPO) game makes it so difficult to play defense. And football offenses have been getting more sophisticated for decades now. Sid Gillman and Bill Walsh started a passing revolution that was picked up by Hal Mumme and his disciples. And coaches like Urban Meyer and Chip Kelly took the spread principles those passing specialists developed and created new ways to run the football effectively using this new-found space. Now offenses put the defense on their heels consistently.

Some months ago, I watched the 1967 USC-UCLA game on YouTube. That was a legendary game, of course, and starred some of the all-time greats. But what really struck me was how little pressure the offenses put on the defenses.

John McKay was a genius and an innovator, but he had two world-class athletes on that offense, and he had a ton of trouble getting them in space. Modern offenses would have no such trouble. They make the game much tougher on defenses.

And rule changes have made playing defense against these modern offenses virtually impossible. Giving offensive linemen some leeway to cross the line of scrimmage on RPO plays means that the back seven on defense never has a clean read. And defenses have lost the ability to win with physicality. You can’t really hit quarterbacks. You can’t punish receivers for coming across the middle. (Today, Kevin Ellison’s hit on DeSean Jackson would lead to prison time.)

This doesn’t mean that defense is irrelevant. But it means you have to play a different style of defense. You’re going to give up yards. You’re going to give up points. If you try to sit back in a zone and play sound defense, you’re going to get killed. Don’t focus on avoiding mistakes. Don’t play the old style where you try to keep everything in front and force the other team to go 80 yards in small chunks. It won’t work. Play aggressively. Go after the quarterback. Put your secondary in difficult positions, let them be aggressive, and pray. You’ll give up points, but a couple of sacks or a big turnover can put the other team in a terrible spot, because they’re probably not able to stop your offense either.

When he was winning at Oregon, before Chip Kelly became Chip Hackett, his defenses were playing exactly this style of football. Kelly knew his defense was going to give up yards and points. But they were aggressive. They went after the quarterback. They jumped routes. And it didn’t take much. Oregon’s defense would get a big sack on one possession and a pick on the next, and all of a sudden the Ducks were up 21.

I’m encouraged that USC is apparently intending to play an aggressive brand of defense this year. The Trojans will score points. If Slovis stays healthy — please let Slovis stay healthy! — he is too good, and his skill position players are too good, for them to do otherwise. Now it’s time for the defense to do its part.

Turn the pass rushers loose, and let those secondary players – who are now pretty experienced – play aggressively and take their shots. They’ll give up some plays. But this is still their best chance to win. I’d love to win every game 24-7. But those days are behind us. So I guess I’m voting for 42-31 now.

I don’t understand USC’s position on Munir McClain. Let me say first that I have no idea whether he defrauded the federal government by applying for pandemic unemployment assistance to which he was not entitled. There’s no way for me to know that. But I know this: USC is not a law-enforcement organization. It doesn’t have subpoena power. It doesn’t have responsibility for protecting the federal government’s coffers. It also hasn’t shown much of a commitment to due process in other areas of student life, so I don’t want it meddling in law-enforcement issues anymore than it absolutely has to.

And here it doesn’t have to. What does this suspension accomplish? It’s hard to imagine that USC knows what McClain did or did not do. So why can’t they stay out of the way and let the authorities – who, last I checked, have no shortage of investigators and resources – do their job? If McClain is charged with a crime, then you suspend him. If he’s not, you don’t. Is that so hard?

I can understand if a student-athlete is engaged in behavior that puts other students at risk. If USC knows that a player is selling drugs or beating up women, then suspend him.

If the school actually has evidence of wrongdoing like that, you remove the player from the team. But this? I don’t get it. The only thing I can think is that the school is looking to avoid more bad press. But, if so, this isn’t the right approach. Nobody would know that McClain is under investigation if USC had not suspended him. And if he is guilty of a crime, do you think this suspension will stop USC from getting a public black eye? Isn’t the media still going to say “USC football player Munir McClain….”

My guess is that USC doesn’t know what McClain has done and doesn’t know if he’s guilty. And if that is, indeed, the state of affairs, have your player’s back until law enforcement charges him with a crime.

I watched a little more college football this week. The first few weeks, I couldn’t do it.

Now that we’re getting close to a Pac-12 season, I decided to dip my toe in the water. But I must say, it was painful watching the Big 10, knowing that the Pac 12 wouldn’t be playing for two more weeks. Apparently Big-10 players are capable of getting ready for football season for more quickly than Pac-12 players are. Who could have guessed? Or maybe this is just part of the Pac-12’s new approach: do whatever the Big 10 does but do it a little bit worse.

Since we’re almost to kickoff, can somebody check with Gavin Newsom and see whether his Thanksgiving regulations apply to USC football Saturdays?

I’m a little unclear as to how many family members I can watch the game with, and whether I can scream at the TV or sing the fight song. I don’t think you have to be Thomas Paine to be offended by elected officials who think
they have the right to give us rules for hanging out with our own families in our own homes. Maybe Slovis and St. Brown can write a letter for us….