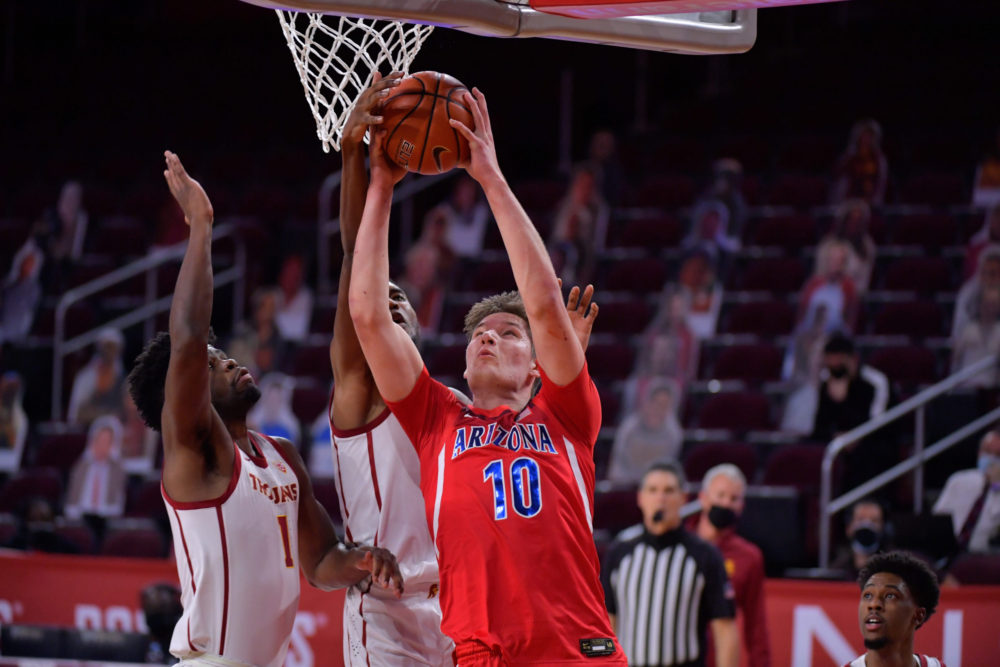 The Trojans have dominated most teams inside on the boards and scoring in the paint. In this game Arizona was the more aggressive and physical team and snapped the Trojans’ winning streak with an 81-72 victory. USC led for only five minutes early in the first half and played from behind the rest of the game. They had chances in the final six minutes but couldn’t convert on key possessions and did not get much offensive production from anyone besides Evan Mobley and Tahj Eaddy. The loss drops the Trojans to 18-4 on the season and 12-3 in the Pac 12.  They are even in the loss column with Oregon and are tied with UCLA at the top after the Bruins one point win over ASU Saturday night.

Arizona led 37-31 at the break and USC was fortunate to be behind by only six. Freshman big Azuolas Tubelis, who had his best game of the season against the Trojans in Tucson, also dominated the first half of the rematch. At the break he had 10 points and 12 rebounds, including 3 at the offensive end. He almost matched the Trojan rebounding total by himself; the Trojans only collected 15 boards and 3 offensive boards in the half. Evan Mobley didn’t attempt his first shot until 5:08 was left in the half; he took only two shots in the half. In the first 20 minutes the Wildcats dominated the boards and attempted seven more shots than USC, led in offensive rebounds 8-3, and led in second chance points 10-2.

Evan came out much more aggressively in the second half and led the Trojans on a quick run to tie the game at 39 at the 17:00 mark. The Wildcats answered the USC run and led for the rest of the game. Coach Enfield told the team at the break that they were not doing enough to get rebounds or stopping the Cats’ interior scoring. He said Arizona was the much more aggressive team in the first twenty minutes. He gave the players the first half stats and compared the front court numbers for the two teams. He also reminded his team that to rebound against a big team “the guards have to be more physical and rebound from behind as well.” USC and Arizona are the two best rebounding teams in the conference.

The Trojans Gave Up Too Many Points And Rebounds Inside

The Trojans shot a good 14-29 in the first half but made only two of ten threes. Arizona made 15-36 shots and made all four of their first half foul shots while the Trojans were 1-4. Part of the reason USC kept it close was their seven first half blocked shots. Arizona’s two primary bigs had 21 points and 16 boards at the break.

In the second half the Trojans did a much better job defensively on the inside. Arizona had only 12 second half points in the paint, but the Trojans could only manage 12 themselves. USC definitely played harder on both ends. Evan noted that part of the first half difficulty was that Arizona ran the same play four or five times in which he was back screened and one of the Cats’ bigs got easy shots near the rim. The Trojans changed how they defended that play at the break and shut it down.

Tahj said that at times they were not as tough as they needed to be and that “we could have been more physical. We can’t take any possession for granted.”

After allowing very few free throw opportunities to a very good foul shooting Arizona team early, the Cats finished 19-23 (82%) from the line compared to the Trojans’ 16-22 (59%). In every area the Wildcats did just enough more than the Trojans to pull out the game. The only defensive stat that provided a big advantage to USC was blocked shots; the Trojans blocked 8 shots to none for Arizona.

After a very hot start Tubelis finished 6-17 from the floor along with 15 rebounds including 4 on the offensive glass. Jordan Brown made half of his 14 shots and finished with 19 points and 13 rebounds including four on offense. Point guard James Akinjo led Arizona with 20 points making 6-13 shots and 7-8 free throws. Newly eligible guard Kerr Kriisa made 3-5 threes for 9 points. Brown was the only Wildcat who missed more than one free throw.

The Trojans Offense Was Almost Solely Evan And Tahj

The Trojans best two offensive players led the team again. After an almost invisible first half Evan finished 7-12 from the floor and 8-12 from the line for 23 points. He looked like a different player after the break, constantly attacking the basket and scoring or drawing fouls. He also contributed four of the Trojans eight blocked shots.

Tahj carried the Trojans in the first half and finished with 17 points, making 7-15 shots and 3-9 from three, but he did not get to the line. Chevez Goodwin played a productive 16 minutes making 4-6 shots, but no other Trojan did much on offense. Isaiah Mobley made two of seven shots, Isaiah White scored 4 points, Drew Peterson was 2-8 from the floor, and Ethan Anderson missed all four of his shots but did contribute 7 assists.

After the game Enfield was asked about the lack of scoring balance.

“Some guys are not big scorers but we would like the other guys to shoot a decent percentage,” Enfield said. “Chevez made some shots but we only had two guys in double figures and we didn’t have it offensively.”

“We tried to run plays for Evan and Tahj out of the last three timeouts. Tahj made a three and Evan made two shots,” Enfield said, but acknowledged they need more scoring from more players. “We didn’t play our best basketball.”

At half time Evan said: “I knew I had to be more aggressive in the second  half. In the second half they stopped focusing on me a little bit and gave more focus to Tahj which gave me more opportunities.”

If that was the Arizona strategy, it is a bit of a head scratcher. Without big support from Evan, Tahj alone could not have kept the Trojans in the game.

“When Evan is being aggressive he makes things easier for us,” Tahj said. “We have outstanding confidence in ourselves and know how well we can defend and score. We need to put this game behind us.”

The week 11 choice is obvious. Evan scored over 20 points in both games while attracting a lot of defensive attention. Isaiah Mobley had a big game against ASU but was a non factor in the loss to Arizona. Tahj had two good games, continuing his strong scoring with 35 total points but he can’t do the other things that Evan contributed. This is Evan’s sixth weekly award.

We are left with big questions after this loss. Is this a bump in the road or the beginning of a slide? We need to be honest in looking at this game and team. The final margin was nine, and the Trojans were only a run away from being in the game, but it never felt like the Trojans had a decent chance to win over the last ten minutes. They were unable to get the key stop or made the big shot. One sequence sums up the frustration: Isaiah Mobley was fouled while shooting in the second half and at the same time a technical foul was called on Arizona away from the ball. Isaiah had two free throws and Noah Baumann shot the two technical foul shots. The Trojans were also given the ball and Drew Peterson was fouled while shooting, giving USC six free throws on one possession and an opportunity to cut into the deficit. They missed three of the six.

This Arizona win was more of beat down than the score reflects. The Cats played harder and were ready from the first tip. They shot the ball better, were tougher on the boards, shared the ball better and made six more free throws. If we look for one reason the Trojans lost there are a host to choose from, which also means that a stronger performance in one of the key areas could have resulted in a much closer game.

The next two games, at home against Oregon and at Colorado, may decide the Trojans fate this season. Win both and USC should win the conference regular season. Lose both and they may finish in third place. A split will leave the Trojans dangling as they get ready for the final three games at Utah, home to Stanford and at UCLA.

After the game I asked Enfield whether he has an understanding of why the Trojans will play Oregon on Monday when the Ducks and Bruins were scheduled to play twice and neither game is currently rescheduled.  He said that he had no idea and that it will be a big task to get ready in one day to play the Ducks instead of playing the previously rescheduled Monday game against Stanford who the Trojans have already played and prepared for. The conference sets the schedule for postponed games and by adding two in the last two weeks they haven’t done any favors to the Trojans.