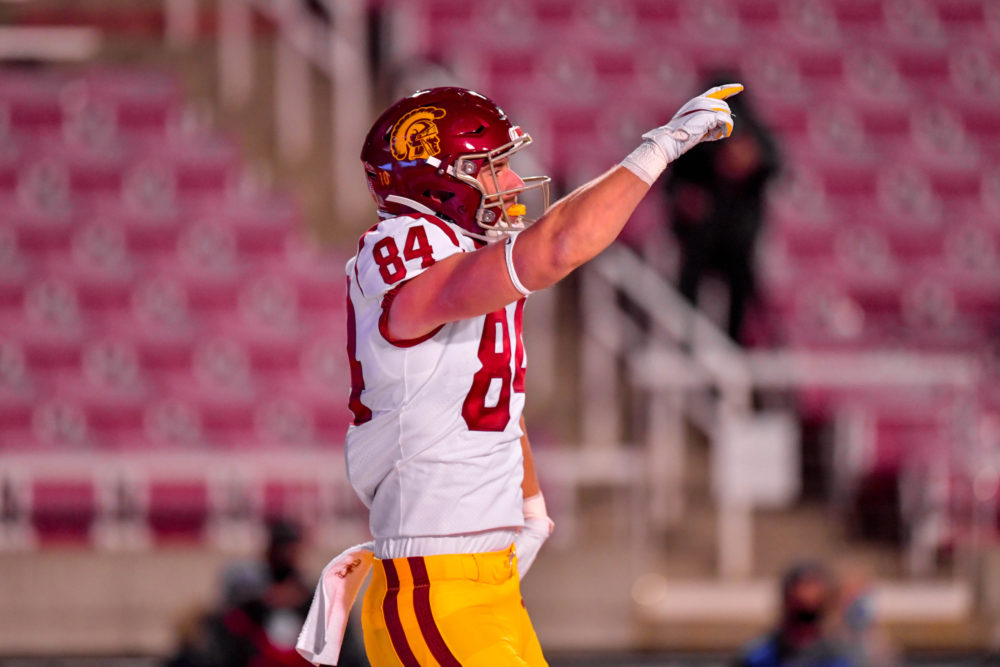 USC hasn’t often relied on the tight end group under offensive coordinator Graham Harrell, and much has been made about the lack of overall catches at the position over the past two seasons. But that position has been key for the USC offense this spring, and could finally have the numbers and talent level necessary to make it a bigger part of the Trojan offense.

“The tight end group has actually saved us a lot because we’re down at receiver right now from the numbers standpoint,” tight end coach Seth Doege said Tuesday morning. “We’re having to play a lot of 11 and 12 personnel.”

“They’re having to learn three positions, whether it be the two inside positions and the tight end spot, which we call the H spot,” Doege said of his group. “The best thing about it…is us getting reps. We’re getting reps that we normally don’t get from a numbers standpoint. So I’ve got a lot of guys getting a lot of reps, getting a lot better, and I think we’ve made a lot of strides.”

Erik Krommenhoek is the leader of the group and elected to return to USC to use his NCAA-given extra year of eligibility. Back too is Josh Falo, who had been playing well until an injury sidelined him last week. Ethan Rae is seeing the field for the first time after missing his first two seasons at USC due to injury. True freshman Lake McRee has jumped into the mix as an early enrollee. And walk-ons Sean Mahoney and Kohl Hollinquest are also contributing to the group. The tight end position will get a big boost whenever Jude Wolfe can return from injury, which does not sound like it could be too much longer.

There have been some growing pains for the group. Falo has missed time recently and Rae has been up and down in certain aspects. Doege said he gives Rae some leeway because he hasn’t played real football in several years and there is a lot to be excited about with him, including his athletic ability as a receiver and his straightline speed.

But Doege raved about what Krommenhoek has brought to the table this spring.

“EK (Krommenhoek) has probably had the best spring so far, and honestly he’s probably playing the best football right now I’ve ever seen him play,” Doege said. “He’s really made a huge step up. If you were going to vote on probably the most improved player through six practices, he’s probably at the top of the list. He’s playing at an extremely high level right now, so we feel really good about EK.”

The next step for Doege and the offensive staff is to feel really good about one of the other tight ends. Being able to stay in 11 or 12 personnel throughout a drive, and execute passing or running plays equally well, would give this offense another dynamic.

“We can play 12 personnel and do everything we want to do,” Doege said. “That’s just been proven over the spring…We’re playing with two tight ends most of the time and we can do everything that we want to do out of 10 personnel, with 12. So that makes us dangerous, especially being able to go from a pass game set to a run game set and not change personnel. If we can find two tight ends that we feel really good about, man, watch out. It’s going to be dangerous.

McRee has been an interesting addition to the position this spring, and Doege said he’s shown himself to be advanced as a receiver and a very willing blocker. Adding some mass to his frame will be the next step, so the coaches feel more comfortable letting him be physical in the run game.

“His only deal is we have to kind of continue to develop his body, let him mature physically,” Doege said. “He doesn’t have a problem throwing his body around, because he’s fearless.”

Doege said Mahoney has been a bright spot when it comes to the running game this spring, and there’s obvious excitement about getting Wolfe into the mix again. He impressed last fall and played extensively early on before a broken foot cut his season short.

It’s appropriate to display some “wait-and-see” when it comes to how impactful the tight end position can be this season. But if USC does have this many healthy options during a season for the first time under Harrell, he’s shown previously that his offense can utilize the spot.

“Most Air Raid systems, you’re really caught into 10 and 11,” Doege said, adding that Harrell’s system differentiates itself from other Air Raid attacks because of the added presence of the tight end. “I think the flexibility of the system and how it’s been created over the years allows you to get in those big personnel sets and still do what you want to do from a pass game standpoint…There’s so many different ways you can get creative with personnel in the system and the rules still stay the same for the kids, so we’re allowing them to play fast.”

The position will grow by one more this summer, when four-star prospect Michael Trigg is added to the roster. Trigg brings the physical tools to make an early impact in his college career, and Doege said his addition will put some added pressure on his group to continue playing at a high level.