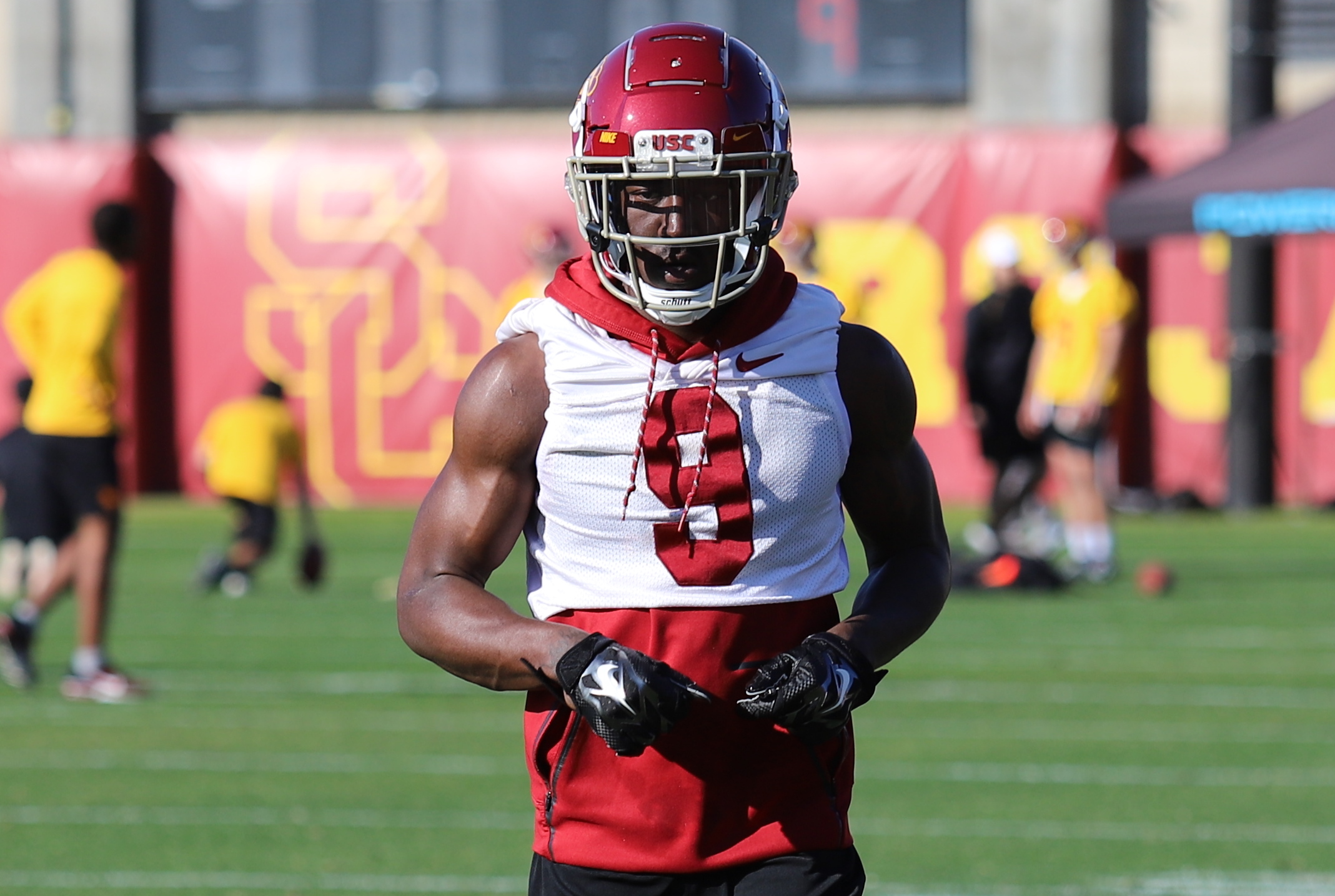 The USC Trojans hit the practice field with shells on Monday afternoon, the first time they’ve been able to wear any kind of pads during fall camp, and turned in a physical practice that bordered on being a little too physical at times.

Head coach Clay Helton took some extra time to gather his team at the end of practice.

“As we get to the heat of camp, it is going to get chippy, it is going to get competitive,” Helton said of what he told the team during the gathering. “They’ve done a tremendous job building as a team and bringing that team atmosphere, and I want them to remember that. As the competitiveness goes, we’re working as pros to get each other better. When you’re in this type of shells and we’re in thud periods, we want to be able to stay up. There were a lot of bodies on the ground today. Just reminding them that we don’t want to have people falling into lower bodies.”

But ultimately, getting into pads and hitting a bit was a good thing for the team.

“Good to get the pads on,” Helton said. “Good to bang around a little bit. Worked a bunch of third down situations today to be able to see how the quarterbacks operated, and I really felt like they did a nice job. Good job by the offensive line today in protection, and we got a little bit of run fit action, which was nice, too. Good, physical day at practice.”

A few new additions to the injury report, as running back Vavae Malepeai sat out Monday’s practice. Helton said he had “a little bit of a tweak of a knee,” but that the MRI came back negative. He hopes to have Malepeai back in a week or less.

Jordan Iosefa left practice early after sustaining a knee injury during run drills. Helton said he will have an MRI this evening.

We saw some field goal kicking for the first time this fall, as Alex Stadthaus and Thomas Fitts took turns, with Chase McGrath still out. Neither kicker was asked to attempt from longer than 31 yards, as they went 9-for-10 combined, with Stadthaus a perfect 6-for-6.

During kickoff return work, Tyler Vaughns, Amon-Ra St. Brown, Velus Jones, Dominic Davis, and Stephen Carr all rotated back deep. With the coverage team instructed not to hit the returner, things tilted severely toward the guys with the ball, but St. Brown still managed to draw some oohs and aahs from teammates with a move he put on a potential tackler.

For the first time all spring and fall, we saw the team split up all over both practice fields, as a few quarterbacks and the wide receivers and cornerbacks headed to the far end of Howard Jones Field to run one-on-one drills, while the rest of the first-team offense and defense hit Brian Kennedy Field for run drills, and the third-team (and some second team guys) had their own run drills on the near side of Howard Jones Field. While it made watching everything at once impossible, it’s easy to see how much this team is getting done during practice, and how many reps each guy is able to get.

Austin Jackson participated in run drills, as it’s nice to see him continue to work his way back into the lineup.

Linebacker Palaie Gaoteote got things started for the defense when he came up in a hurry to pop the running back at the line of scrimmage on the first play of the session. He made several plays during these drills, and looks really confident right now.

Running back Stephen Carr then took a handoff and had a terrific cutback to break outside for a big gain. This is a couple of practices in a row now that Carr has showed signs that he might be back to that form we saw as a true freshman, where he looked so dynamic and a threat every time he touched the ball.

“[A] healthy Stephen Carr for the first time in a while,” Helton said after practice. “You saw some explosiveness the other day, and then today he made a huge play on a draw play earlier in team run. To see that burst back, and that lack of hesitation and a little bit more confidence, was great to see.”

Helton praised the entire running back group, including walk-on Quincy Jountti, who was impressive throughout spring ball and has continued that into the fall.

Markese Stepp also had a big run during the session, following a block from tight end Erik Krommenhoek.

During team drills, Greg Johnson (photo above) had a nice pass breakup on a deep ball intended for Michael Pittman. Johnson is one of three cornerbacks — Isaac Taylor-Stuart and Olaijah Griffin are the others — competing for starting spots and all three have been really impressive through three practices. Johnson came back later with a nice interception on a pass from Matt Fink.

Ralen Goforth stepped in as the second-team Mike linebacker with Iosefa out and had several nice plays, including a pop on freshman wide receiver Munir McClain after a short completion.

CJ Pollard got in on things by knifing into the backfield on a blitz and bringing Jountti down behind the line.

JT Daniels got things going for the offense with a touchdown pass to Jack Webster down the middle, exploiting a broken coverage from the defensive backs.

During seven-on-seven work, Matt Fink was up first and hit several quick passes, then found Drake London on a ball down the middle.

Jack Sears connected on a deep touchdown to Josh Falo, as well as quick completions to Michael Pittman and Matthew Hocum. He also threw a pass that was nearly intercepted by Goforth.

Daniels had completions to London, Chase Locke, Pittman, and two to Zach Wilson, with one incompletion scattered in.

With the full team back on the field, Sears was up first and his first pass was immediately batted down by Drake Jackson. He then converted a short third down with a completion to St. Brown, before escaping the pocket and finding Pittman down the field along the sideline. Pittman was ruled out of bounds, but there’s a chance his foot got down to complete what would have been a really nice play from Sears and Pittman.

Kedon Slovis took his turn and delivered a number of completions. It still feels highly unlikely that Slovis is a candidate to grab the starting spot this fall, but it’s feeling more likely that this guy has a chance to be really, really good in this offense down the line.

JT Daniels threw incomplete due to a nice play by Taylor-Stuart. Daniels then found Kenan Christon, who got outside and scored an easy touchdown with the help of a nice block from Velus Jones.

Christon also ended the practice with a touchdown, running through safety Jordan McMillan (though again, with tackling not allowed, the offense had the benefit of running through thud attempts all day).

The team stayed after practice to run sprints across the field. Among the linemen, Jalen McKenzie, Jay Tufele, and Christian Rector stood out with how far ahead they were of the rest of the guys.

Linebackers Ralen Goforth, Maninoa Tufono, Tuasivi Nomura, and Spencer Gilbert all stayed after to get some extra work in on the pads.

The quarterbacks, wide receivers, and tight ends get a ton of extra work in on the JUGS machines in the far corner of the field. It sounds like a factory working full tilt with several machines spitting out ball after ball to the receivers.