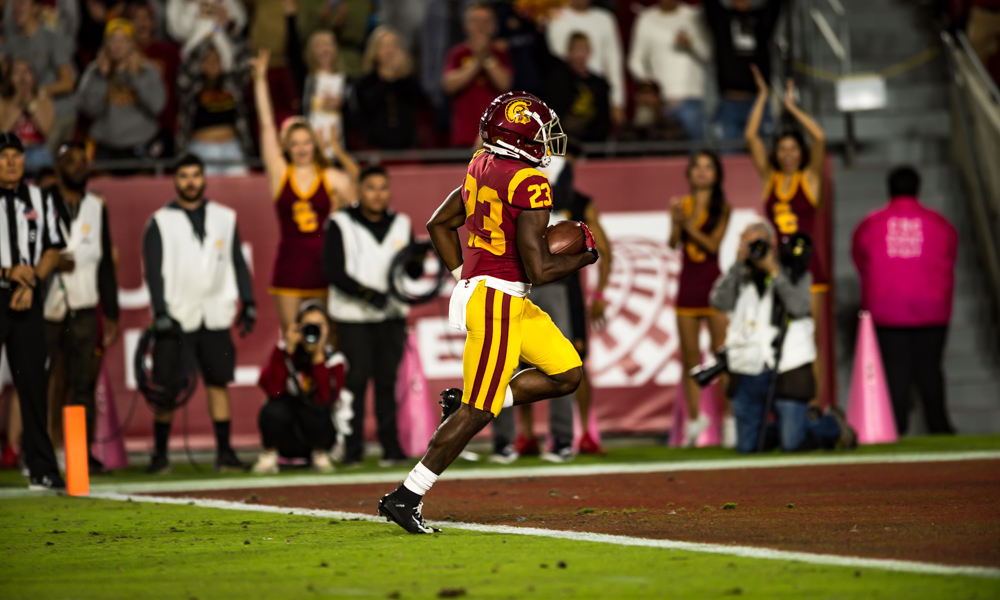 Injury issues again dominated the day, as the Trojans are unlikely to get back many — or any — of the six players who left the Arizona game due to injury in time for Friday night’s game at Colorado. And more than a few will be out much longer than that.

Following Monday’s practice, head coach Clay Helton went down the list of six players who left the Arizona game with injuries, and none of them turned out to be minor.

Running back Markese Stepp suffered a torn ligament in his ankle that will require surgery. Helton said the rehab time is expected to be between three and five weeks — a timetable that would mean Stepp will miss the Colorado, Oregon and Arizona State games, and perhaps the entire regular season.

Running back Stephen Carr suffered a hamstring strain and sat out Monday’s practice. Helton said he doubted that Carr would be able to return in time for the game on Friday night.

Safety Talanoa Hufanga suffered a shoulder dislocation. Helton said Hufanga knew right away that his shoulder dislocated and the medical staff was able to reset it immediately on the field.

Defensive end Drake Jackson suffered a high ankle sprain. He was not medically cleared to practice on Monday and was in a walking boot.

Linebacker Malik McClain dislocated his shoulder and is also not medically cleared.

Wide receiver Munir McClain tore his ACL and will undergo season-ending surgery. McClain tore the ACL in his other knee in high school.

As for players who sat out the Arizona game due to previous injuries, the news is slightly better. Running back Vavae Malepeai will continue to sit out, and Helton said he is likely still multiple weeks away from returning.

But the Trojans should be able to add some bodies to the defensive backfield, where they were left with three true freshmen starting at cornerback against Arizona. Olaijah Griffin, who missed the game with a back injury, and Greg Johnson, who missed with a shoulder injury, both practiced on Monday and Helton said they felt confident in how they felt following the practice.

Defensive end Christian Rector did not practice on Monday, but Helton said they would see how he felt later in the week and he could potentially be available in a small role against Colorado.

Step up with Stepp out

The Trojans have played without Hufanga before, as he missed the Washington game earlier this year. If both Jackson and Rector are out on Friday night, Connor Murphy, Caleb Tremblay and Hunter Echols will need to put together big performances.

But no position is more interesting than running back at this point, as true freshman Kenan Christon, who finished with 103 yards and two touchdowns against Arizona, could go from preseason fifth-string to Game 8 starter at tailback.

“We kind of got an idea how to use him,” running backs coach Mike Jinks said of the speedy freshman. “He kind of fits some of the stuff we do from a schematic standpoint. There will be some subtle changes, but it won’t be anything you’re able to notice.”

Jinks said the 55-yard touchdown run Christon had was the same one-back power play that they’ve run with all the other tailbacks this season.

Where things could get interesting with Christon is when it comes to pass protection, and asking him to potentially locate and stand up a 220 or 230-pound linebacker coming through a gap. With only two healthy quarterbacks, Jinks acknowledged that a missed assignment or a bad block could be devastating.

“So you have to be creative in what you do from a schematic standpoint or who you have him blocking,” Jinks said. “And they still have to cover him if you release him. So there are a lot of things we’ll be able to do to be able to help protect him.”

But it doesn’t sound as though the run game will fall 100% to Christon against Colorado.

“We’ve got some wrinkles that we always have,” Helton said of USC’s potential running attack against the Buffaloes. “I know it’s cliche, but it’s next man up. I’ve never lost three backs in one week before in 25 years, but you know what, there’s a first time for everything. Find a way to go win a game on the road. And that’s what we’ll do.

“We’ve got a huge opportunity that stands right there for us. We can write our own story right now. We’re going to believe in the kids that are out here, but hopefully we’ll get some back here soon.”