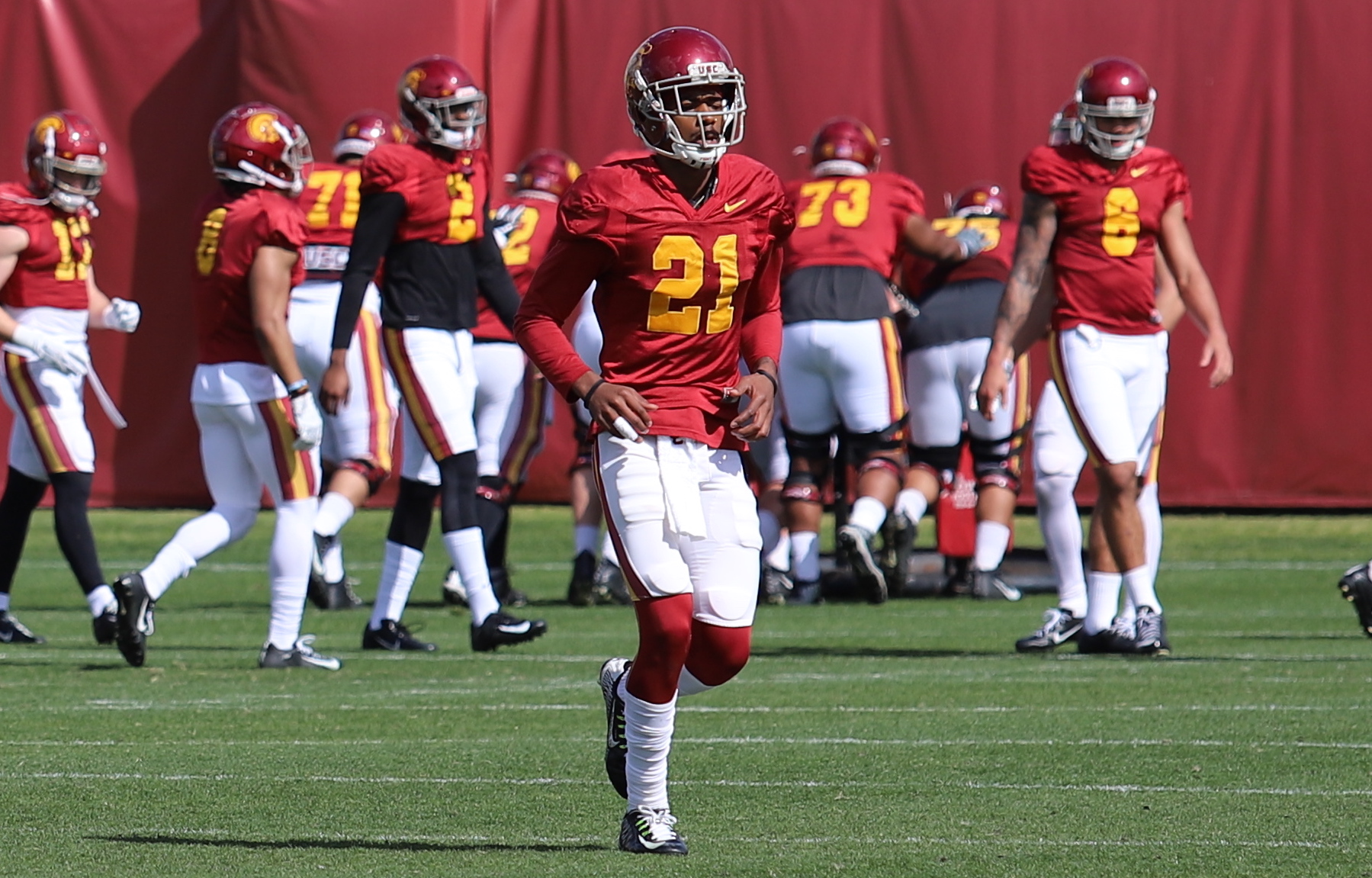 Following Saturday’s extended scrimmage, the USC Trojans were back on the practice field Monday afternoon, getting in plenty of 11-on-11 work during a helmets-only practice.

“Good day getting back out here,” head coach Clay Helton said following the practice. “Start of a new week leading up to Saturday, which will be a big day for us. We’ll be back out in full pads. Really trying to get our guys in a routine week of what a game feels like over these next two weeks. It ought to be a great, physical day tomorrow.”

The practice started off with a “wow” moment courtesy of Amon-Ra St. Brown, as the sophomore receiver came across the middle and went up high to haul in a one-handed catch during what was a fairly mundane pitch-and-catch drill. It was the kind of play you could see pop up on social media as an example of his ability if it was captured on video.

They then moved into some special teams work, as the Trojans worked on returning punts — specifically, the outside defenders blocking the gunners to allow for the returner to get going upfield.

McClain is in concussion protocol. Ford continues his recovery from an ACL injury, with no set timetable for a return.

This was the first day we saw what appeared to be scout team work, with the first-team defense and first-team offense getting looks from the third-team offense and defense — a sure sign that the season is fast approaching.

A significant portion of practice was dedicated to 11-on-11 work, with Jack Sears up first with the first-team offense and was immediately met by Talanoa Hufanga flying into the backfield to knock down a pass. It was a forward pass, but it was good to see the defense rally to the loose ball and linebacker Palaie Gaoteote scoop it up (defenders not picking up loose balls that may or may not have been a forward pass is a particular pet peeve of mine, so this was going to be noted).

Kedon Slovis went with the second-team offense, with Drew Richmond lined up at right tackle and Clayton Bradley at left tackle. He tried to hit John Jackson III deep down the sideline, but Olaijah Griffin was in coverage. Helton spoke after practice about how pleased he was with the deep ball during Saturday’s scrimmage, and we saw more of it today.

Matt Fink had his turn in the rotation and had to throw the ball away due to pressure from defensive end Christian Rector. Two plays later, Fink tried to adjust to a blitz and find a receiver quickly, but Talanoa Hufanga read the play and grabbed the interception, which he would have returned for a touchdown. The following play, the defense brought pressure again, but Kenan Christon was able to do enough to let Fink get away a completion. The block brought some praise from running backs coach Mike Jinks.

True freshman defensive tackle De’jon Benton got in on the pass deflections, as he knocked a Daniels pass out of the air.

Slovis completed three-straight passes — the latter two to Erik Krommenhoek — before ultimately finishing his drive with an incompletion, which Drake Jackson batted in the air and Malik McClain nearly intercepted.

Fink got Drake London involved, hitting the true freshman on three plays in a row, before firing high over tight end Josh Falo.

One of the offensive plays of the day was turned in by JT Daniels and Tyler Vaughns, as Daniels sidestepped a rush and delivered a ball that was high and a little outside to a streaking Vaughns, who hauled it in above cornerback Isaac Taylor-Stuart as he hit the goal line for a touchdown. Daniels then found Jackson III on a short pass, which the true freshman turned upfield and into a touchdown.

Hunter Echols picked up a sack, and the drive ultimately ended with a missed throw to Devon Williams in the endzone, against coverage from Chris Steele.

Sears wasted no time getting going on his next drive, finding Williams up top along the sideline for a 98-yard touchdown, as the sophomore got behind true freshman cornerback Adonis Otey.

Fink returned, with Richmond at left tackle with the first unit. Greg Johnson came screaming in for a sack on the first play, as nobody picked him up. We continue to see some mixing in the secondary, as Johnson gets work at nickel back and Chase Williams some work at safety. The next play, Fink tried to hit Krommenhoek outside, but Hufanga read the play and cut in front of the receiver, grabbing an interception and taking it back for what would have been another pick-six.

To his credit, Fink bounced back with his throw of the day on the next play, finding Vaughns on a deep ball against coverage from Taylor-Stuart, as Vaughns again went high to snatch the ball out of the air before Taylor-Stuart could knock it away.

Slovis capped off practice with three completions, first to Jackson III, then Falo, then a touchdown throw to wide receiver Zach Wilson.