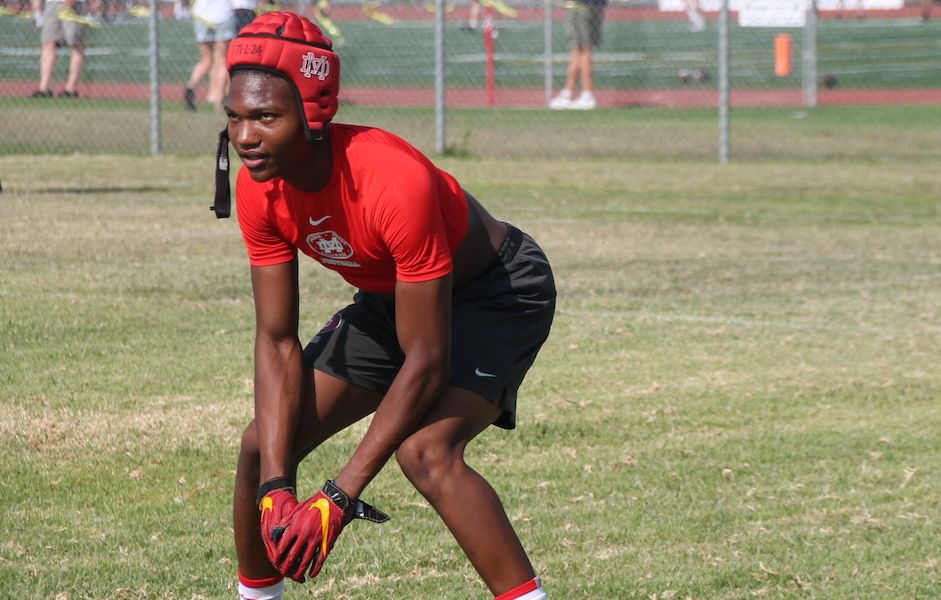 Mater Dei won the Battle of the Beach passing tournament at Edison for the third year in a row but with a different emphasis than we’ve seen in recent years.

Whereas the Monarchs have relied upon a high-powered offense that featured JT Daniels and Amon-Ra St.Brown, this year the unit that jumps out at you is the secondary. First of all, they are imposing with their size. The corners are both ranked nationally in the top 10 at their position in the class of 2020 in Elias Ricks (photo above, 6-2, 185, and was wearing USC gloves today) and Darion Green-Warren (6-0, 175, just committed to Oklahoma). The safeties are Jeremiah Criddell (5-11, 190, an Oregon commit) and William Nimmo (6-1, 190). It’s also a tremendously athletic group and one that plays with a lot of confidence. The trash talk was definitely on display today and they backed it up.

Several of the offenses that will have to go against that Monarch secondary were part of the event today with St. John Bosco, Orange Lutheran and JSerra, and all have enough weapons to put up a serious challenge.

Bosco has D.J. Uiagalelei and his physical presence and arm strength were on display, and his top target was TE Jude Wolfe, who will announce his college choice next month with a lot of signs pointing to the Trojans. Wolfe looked solid, as he always does, and he’s not the only weapon out there for the Braves along with Stanford commit Colby Bowman, Kris Hutson and Beaux Collins. Bosco also has a pair of good corners of their own with recent USC commit Chris Steele and Trent McDuffie.

The OLu duo of QB Ryan Hilinski and WR Kyle Ford picked up right where they left off from last week in Dallas at The Opening, where Ford took home MVP honors and Hilinski was one of the top QB’s in attendance.

JSerra took a step forward last season under former USC offensive lineman Pat Harlow as their new head coach. Their QB Caden Bell is getting a lot of Ivy League attention and he’ll have a trio of receivers to throw to in USC commit Munir McClain (did not take part today as he continues to rehab from a knee injury last fall), Tarik Luckett (Colorado, Oregon and Oregon State top his list) and slot Tyler Shimomura.

Other items to note from the day:

* Bru McCoy did not take part due to a hip injury

* Jayden Daniels is a big guy at quarterback but he struggled with his accuracy in the two games I watched. To be fair, he didn’t have his top receiver Darren Jones, who did not take part.

* Bryce Young also had some ups and downs early but as things went on he settled down and was very accurate in the final games.