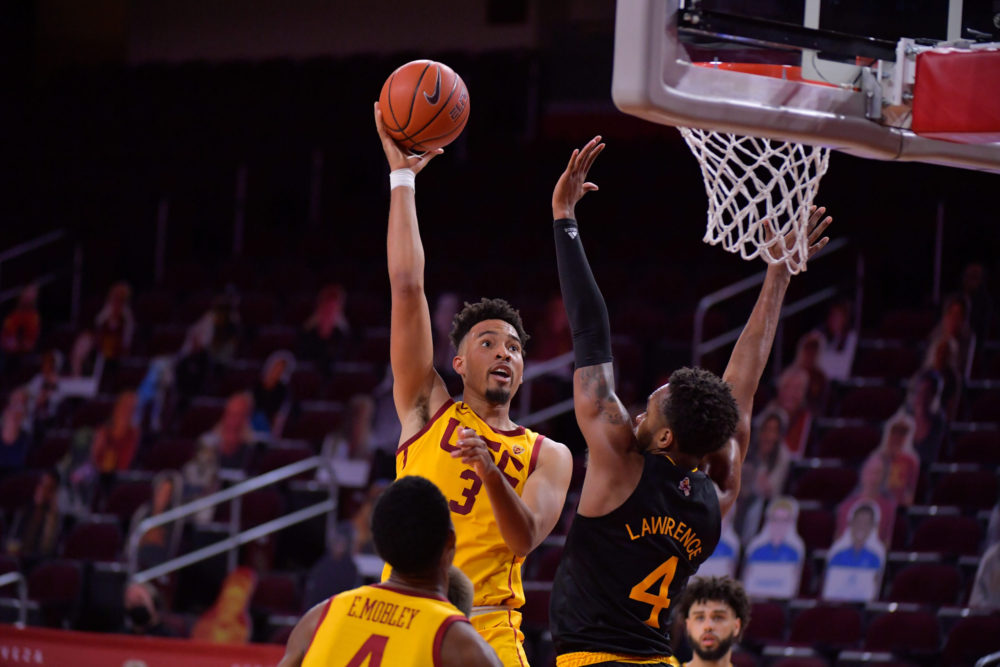 The Trojans beat ASU Wednesday night 89-71 in a game that was close throughout the first half and for part of the second until the Trojans, behind Evan and Isaiah Mobley, blew the game open. USC improved to 18-3, 12-2 in the league and 11-1 at home. Freshmen stars Josh Christopher and Marcus Bagley remained out for Arizona State and left the Sun Devils undermanned. ASU believes one or both may be available Saturday when they play the Bruins.

If you didn’t see the game and saw only one half of the final stat sheet it might look confusing. The Trojans made 36-66 (54.5%) shots from the floor and 11-20 from three. They had 21 assists, scored 44 points in the paint and had only 11 turnovers. Those numbers would suggest a rout, yet USC led only 46-44 at the halftime break.

On the other side, ASU was a very good 27-60 from the floor against a usually stout Trojan defense and made 8-15 threes. They had 8 offensive rebounds and only 11 turnovers. Star point guard Remy Martin scored 15 points in each half and made 12-19 shots and 4-5 threes. If someone saw these Sun Devil stats and nothing else it might lead to the impression that the Trojans were upset or at best pulled out a close win.

In fact none of the scenarios that might be gleaned from the stats played out. The Trojans defense awoke in the second half and held the Devils to only 27 second half points. At the same time USC’s offensive barrage continued the entire game. The Trojans led by 20 until a couple free throws in the final seconds gave the Devils 71 points and the Trojans weren’t able add to their remarkable record when holding opponents to 70 or under.

ASU doesn’t have a lot of size and the brothers took advantage. In the early going Isaiah had half of the teams’ first 14 points including a made three. He had 9 points and 7 rebounds at the break on his way to his first career 20 point game. He made 60% of his shots and grabbed 12 boards including 5 on the offensive end. USC head coach Andy Enfield said, “Isaiah played a great all around game.”

Evan made 9-11 shots including one after he grabbed an errant Devil pass under the ASU basket, dribbled the length of the court with defenders chasing him and finished with a dunk. Evan made one of his two attempts from three and 3-4 from the line to finish with 22 points. He added 9 rebounds including three on the offensive end and 7 assists, several to Isaiah.

“Evan looked like Tom Brady with the ball in his hands, reading the defense and making the right play,” Enfield said, adding that the Trojans like to play with two bigs in the game almost all of the time. “Having two bigs who are skilled is a luxury. We have two skilled bigs this year and have more skill in the front court and better spacing on offense than last year.”

Evan added: “We had a feel for each other (tonight) and it was great to see him (Isaiah) play well. A lot of the time when I got the ball in the post his man came over (to double team) and I looked for Isaiah.” Isaiah added: “(ASU’s defense) gave us a lot of open looks….I like to get going early and I knew they were smaller. When my three dropped I knew I would have a good game.”

The Offense Was More Than The Mobleys

In describing the Trojan offense, Enfield said that “everything worked.”

Tahj Eaddy started quickly making his first three shots including one three. He had 15 points at the half matching Remy Martin’s total. Tahj added a late three to finish with 18 points, making 7-13 shots and 4-6 from three, and also added 4 assists.

Drew Peterson appeared to break out of his slump. After missing his first two shots he made four of the nest six to finish with 11 points along with 3 boards and an assist. Speaking about Drew’s recent struggles Isaiah said: “The coach has been trying to pick him up. I’m glad to see him get back going.”

ASU employed a press at times after made shots or free throws but it wasn’t a factor. The Trojan guards did a good job against the press and a couple of times found one of the Mobleys to bring the ball into the front court. Against a very quick set of guards USC protected the ball much better than in some recent games.

The Defense Took The First Half Off

Asked about the first half defense Enfield said he was “very disappointed.”

“It’s very uncharacteristic of how we played all season. Defensively the second half is what we are accustomed to and what we expect,” Enfield said, adding, “the first half looked like an NBA All Star game.”

The Trojans pulled away in the final eight minutes and held ASU without a field goal for the last six. They outscored the Devils 43-27 in the second half.

The Trojans knew going in that Remy Martin is a spectacular offensive player.

“Remy was hot tonight and it is very hard to guard him one on one,” Enfield said.

Martin struggled to get his teammates good shots and had only 3 assists with 4 turnovers. The Trojans wanted to challenge everyone else and in the second half that worked well. The rest of the Devils were a combined 15-41 for the game; Enfield suggested that they didn’t believe Martin could beat them by himself. Senior guard Alonzo Verge is also a very good scorer who Enfield labeled him as “dangerous” but Verge never was a factor and made only 3-11 shots.

The Devils are a very good free throw shooting team. USC neutralized the potential free throw difference by not fouling. The Devils had only three free throw attempts in the first thirty minutes of the game.

At times after Trojan baskets the quick Devil guards rushed the ball into the front court to get a shot before the defense was set and they got some open looks. For some reason they went away from this strategy and other than Martin the rest of the ASU players struggled to make shots in the second half.

The Trojans led almost the entire game though the Devils were within striking distance until the last eight minutes when the Trojans ran away with the game.

If the Mobley brothers play this well on the offensive end and the Trojan wings and guards make shots like they did in this game the Trojans are very dangerous. Ethan Anderson had a couple of threes and got into the lane to score or pass. Drew also got into the paint and made a couple of shots. When this team scores from all levels they are very good. Can the Trojans play even better on offense? Potentially so; Chevez Goodwin missed some easy shots including a dunk attempt and Isaiah White was not a factor on the offensive end.

After the game Isaiah Mobley talked about his game and the team: “I know what’s at stake. I feel like when I get going the team gets going. I’m trying to pick up my intensity… Hopefully we can make a run in the tournament. The only thing that’s been missing is the fans.”

The conference is clearly not as good as projected. Part of the reason is that teams have missed key players for stretches. ASU has missed the freshman pair, Stanford missed three starters for several games, and UCLA played without big man Cody Riley for a few games. We need to remember, though, that USC brought back only three players from last season’s team including one starter. The starter,Ethan Anderson, went down in the third game for an extended spell and this group of strangers played hard and won without him. If the season ended today there should be no question that Andy Enfield is the Pac 12 Coach of the Year. USC’s NET ranking was 15 before Wednesday and it won’t go down with this 18 point win. The Trojans were picked to finish sixth in the league before the season. Enfield and his staff have done a remarkable job weaving this team together.