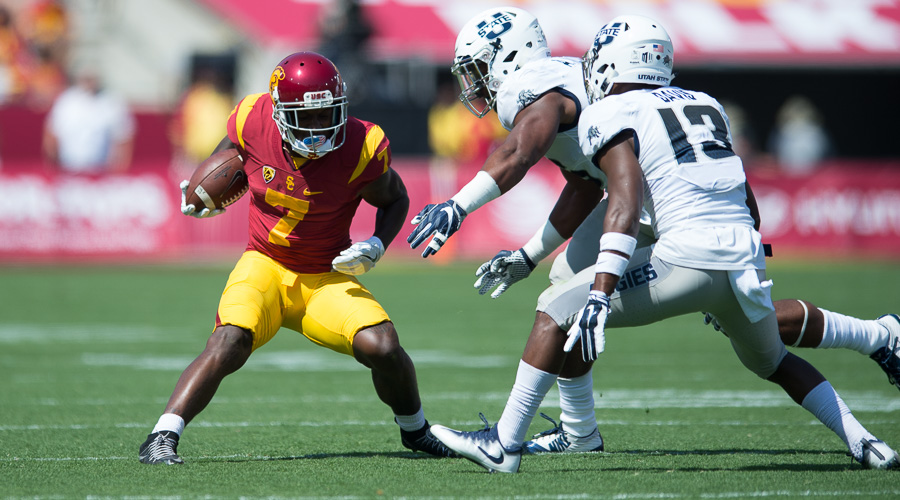 USC junior wide receiver suffered a torn ACL in his left knee in the game against Arizona, according to USC coach Clay Helton.

Mitchell served as the starting slot receiver this year and was 3rd on the team in receptions (24) at the time of his injury. He had his best game of the season against Colorado with 6 catches for 63 yards.

His performance in the 2016 season was also the closest we’ve seen to the potential Mitchell showed in high school as an explosive receiver and return man. He suffered a torn ligament in his right knee during a summer workout prior to his freshman season at USC and it took him a while to get back to that kind of form. He had 7 catches in 2014 as a RS freshman, and then 37 catches in 2015 as a soph despite missing two full games with an ankle injury.

“It’s just really sad,” Helton said. “You can tell how it affected everybody when he went down. Steven is loved by this team. He was playing as well as he’s ever been, and he was preparing and practicing like a pro. When you see a kid like that who does everything right, a first-class individual, and he gets a 2nd knee injury, it’s just sad.”

The Trojans will look to Deontay Burnett and Jalen Greene to potentially fill the role vacated by Mitchell. Burnett has been getting increased playing time in recent weeks and is right behind Mitchell in receptions (23) while also adding a nice touchdown catch against Arizona.

“Deontay has made some great plays for us,” Helton said. “He has a very wide catch radius and Sam has a great feel for him.”