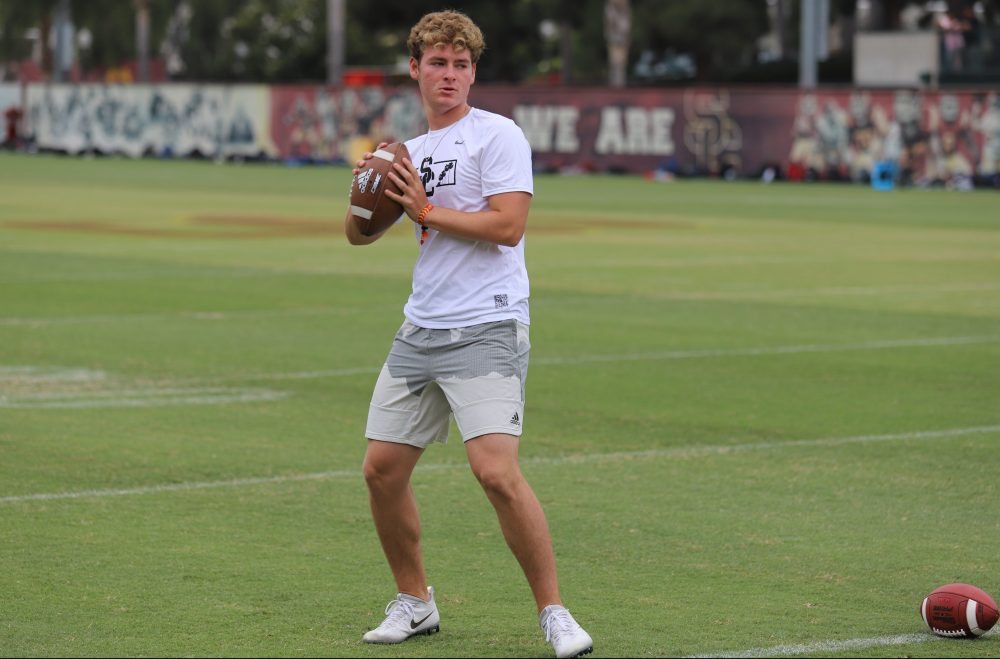 Four-star quarterback Miller Moss (Mission Hills, Calif./Alemany) announced his commitment to USC on Monday, and with that, the Trojans are on pace to do exactly what they needed to do at the position in this 2021 recruiting class.

Moss, the nation’s No. 52 overall prospect, checks in at 6-foot-2, 197-pounds with one of the most fluid throwing motions of any quarterback in this class. He’s very reminiscent of Slovis in his ability to create space in the pocket while keeping his eyes downfield rather than looking to run. As a junior, Moss completed 67% of his passes for 3,118 yards and 28 touchdowns against 10 interceptions.

Moss is the No. 7 prospect in the state and joins Garcia–the state’s No. 4 prospect–in giving the Trojans two top-10 in-state recruits and the top two quarterbacks in the Los Angeles area.

The Trojans’ quarterback is unquestionably depleted, as USC is on pace to play the 2020 season with just two scholarship quarterbacks, in presumed starter Slovis and fifth-year senior Matt Fink. Following the four-way position battle last fall, USC has now lost Jack Sears and JT Daniels to transfers–Sears to Boise State and Daniels to Georgia. USC is expected to add Vanderbilt grad transfer quarterback Mo Hasan to the roster as a walk-on.

The need for two quarterbacks in this class became paramount when USC lost a commitment from five-star quarterback Bryce Young in the 2020 class. Young flipped to Alabama in late September. USC chased a few quarterbacks following that decommitment, but couldn’t reel any in.

The last time USC signed two quarterbacks in a class was in 2015, when Sam Darnold and Ricky Town became Trojans. USC also did so in 2011, when the Trojans signed Max Wittek and Cody Kessler. In both instances, one quarterback became a multiple-year starter while the other eventually transferred.

Moss is a big get for USC in this class for several reasons. The first, and most obvious, is that he is very talented and more than capable of becoming a multiple-year starter at the position for the Trojans. Second, it’s not always easy to recruit a second quarterback into a recruiting class when the first one committed is highly ranked, as Garcia is. Moss had a final four of Alabama, LSU, UCLA and USC, and at the beginning of the process, looked like he could be a good bet to wind up a Bruin. USC’s ability to bring him in keeps him away from Westwood and off the future schedule. And third, it continues USC’s strong presence at Alemany, which has been loading up on talent the past few years.

Moss is the second 2021 prospect from Alemany to commit to USC, joining offensive tackle Saia Mapakaitolo. USC also holds a commitment from four-star 2022 linebacker Niuafe Tuihalamaka. Defensive back Jaylin Smith holds an offer in the 2021 class, wide receiver Kevin Green Jr., cornerback Ephesians Prysock and defensive tackle Damonic Williams have offers in the 2022 class, and safety R.J. Jones has already been offered by USC in the 2023 class.

Moss is commitment No. 14 for the Trojans’ 2021 recruiting class, which is a top-five rated class in the country.