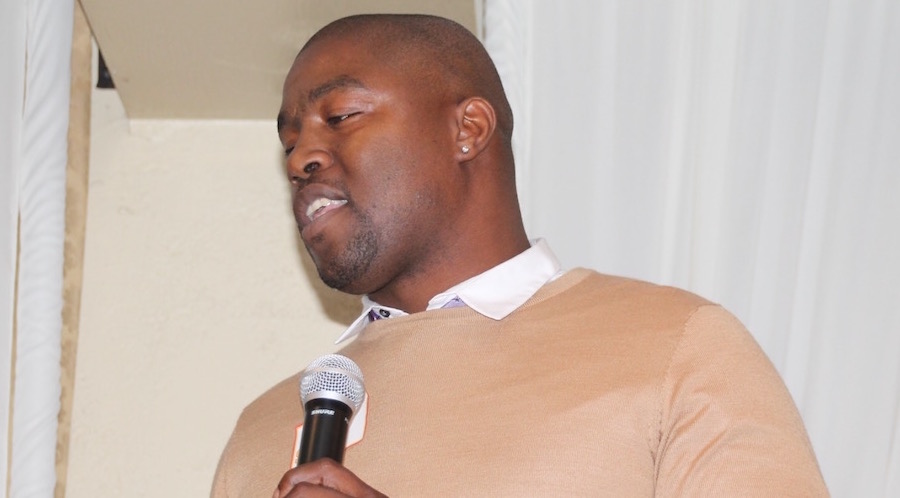 The San Gabriel Valley Trojan Club held their annual dinner to present the Jess Hill Award last week and it was a special evening that was highlighted by an appearance from All-American wide receiver Mike Williams.

The night began with opening remarks from club president Sean Kennally, who noted the impact of a USC Rose Bowl win on the crowd size as 270 Trojans filled the Brookside Country Club dining room.

Kennally brought former USC quarterback Shane Foley to the stage to serve in his recurring role as emcee for the club. Foley wears many hats throughout the year in support of USC (including hosting a yearly fund-raiser at his home for the Trojan Marching Band) and he does a great job guiding the Trojan conversation at these SGVTC events.

The first speaker brought to the stage was USC strength and condition coach Ivan Lewis, who was there to accept the Jess Hill award on behalf of Zach Banner, who is training for the NFL combine and was unable to make it. The Jess Hill award is presented to the USC student-athlete who represents the university motto of “Faithful, Scholarly, Skillful, Courageous, Ambitious.”

Lewis, who had served as an assistant strength coach at USC under Chris Carlisle during the Pete Carroll era, returned to the Trojans in 2014. Lewis had known Banner since Zach was in high school and would come to camps at the University of Washington, where Lewis was working at the time.

On Zach Banner “I got to know Zach when he was in high school and he was such a big presence, we bonded right away. He also told me way back then that he was going to USC, he knew he could end up having a career in media after he’s done with football. Zach likes to talk a lot. If he was here, he would be talking way past the limit, I can assure you that. He was also one of the team leaders that helped keep things together this year. After the Utah game things could have turned but they didn’t, and that was because of leadership.”

On increased use of devices such as catapult technology in training “Catapult technology is a device that fits under the players pads and it has been a big part of what we’re doing lately because it measures so many data points that can help us do our job better. We may look at two players in a practice and think one guy is going harder than the other but the data can tell us different. It can help us monitor injuries, I was really worried about hamstrings this year because we couldn’t afford to lose anyone and we only had two hamstring issues the whole year.”

On winter workouts for the Trojans “One thing that stands out to me about the winter workouts so far is that we’ve got a group of sophomores and juniors who are leading things, that’s been great to see. We’ve got a lot of accountability to each other. That’s one of the things I remember from those USC teams when I was here before, it was the players who were policing things.”

On Sam Darnold in the Rose Bowl “There was a point in the third quarter where I was really going at a referee, just digging in on him for something that didn’t go our way, and Sam kind of grabs me on the shoulder and says “don’t worry coach, we’re gonna win”, so I just kind of said “all right, he’s got this”.”

On Pete Carroll “I went up to a Seahawks OTA practice last spring and there were a lot of college coaches there watching from the sidelines. Coach Carroll comes on the field and immediately runs over, “Ivan!” and he takes me out to the middle of the field to watch practice. That’s the kind of guy he is, he makes you feel so welcome.”

On who was the strongest player on the team “Stevie Tu’ikolovatu by far. I’ve never seen anything like it. Porter Gustin has been crushing it lately.”

On Chuma Edoga “I haven’t seen a guy so motivated to be the starting left tackle.”

On Kenny Bigelow “Right now we’re looking at Kenny like he’s going to be the guy at nose tackle. He’s ready to go, strong, it’s his time.”

Next to the stage came Mike Williams, who is generally recognized along with Keyshawn Johnson at the top of the all-time USC Trojan receiver group. His impact on the early Carroll years was undeniable as a dominant presence that helped take Carson Palmer and the offense to another level in the Orange Bowl year, and to a national championship as a sophomore.

On choosing USC “When I was being recruited I was all set to go to Florida. I knew a guy on the Gators basketball team, and the QB from my high school was David Reaves, his dad had played at Florida and his sister was Layla Kiffin, who was married to Lane. They were like “hey, Lane wants to talk with you, we know you aren’t going out there but he just wants to talk”. So Lane was the one I dealt with early on but things really changed when Pete Carroll and Norm Chow came to watch me play basketball. After the game we went back to my house, and we had a hoop set up in the driveway. Coach Carroll asks me “you want to play?” and I thought “you’re an old white guy” but he ended up being the dirtiest hooper I’ve ever been around! It was Chow who really sold me when he showed me how he would use me, I said “that’s good enough for me”.”

On team leaders “When I got to USC we had leaders like Carson, Troy Polamalu, Alex Holmes, guys who hadn’t won but they knew where they wanted the program to go.”

On Ivan Lewis mentor Chris Carlisle, who Williams played under at USC and for the Seattle Seahawks “Chris Carlisle is the nicest mean guy I know.”

On his decision to leave USC after his sophomore year “It’s not a great moment for me. If I had to do it over again, you just don’t know how much fun you have when you’re in college. The NFL is a job, and it’s a different world. I had gotten some advice about entering the draft, and one of the statements about staying in school vs leaving that stood out to me was “do you want to feed their families or do you want to feed your family?” My decision didn’t really hurt the Trojans, they still ended up winning the national title. I knew things would be fine with guys like Matt (Leinart), Steve (Smith) and I knew what Dwayne (Jarrett) was capable of.”

On coaching “I’m in my 5th year coaching high school football. I like helping young people. I’m at Van Nuys HS and last year we averaged over 300 yards per game rushing. We threw the ball 17 times all year. I want to line it up and break you.”

On following the current Trojan teams “I follow SC pretty closely. There have been a lot of guys involved who were there with me, like Kiffin, Sark, Keary Colbert, Kenechi Udeze. The program is back to where it looks like the kids care, they are scratching and clawing to find ways to win, this year brought that back.”

On his Rose Bowl touchdown pass to Matt Leinart “That is the only play I care about still. You always work on it but you never actually run it, and now to get to run it in this game? I caught a bunch so it was good to throw one.”

On the impact of social media “In recruiting, social media gives some great insight. I go on a kid’s twitter page and see what they post, what they repost.”

On what he has learned as a coach “As a coach you need patience. Not everybody can do what you did. I tell my kids to do their best and we’ll live with that.”

The night ended with a talk on the USC recruiting class of 2017. I joined Foley for a review of the class, along with a Q&A from the crowd.

On the strength of the class “It was definitely in the trenches. USC added 5 bodies each on the offensive and defensive lines, led by a trio of defensive tackles who are as good of a group as the Trojans have signed in one class. The flip of Marlon Tuipulotu from Washington to USC was a critical moment for the class.”

On the athletic linebackers “A very athletic duo in Levi Jones and Tayler Katoa. Jones has great genes with a dad who played in the NFL and two brothers who played college football. Tayler reminds of former Mike Williams teammate Lofa Tatupu as a former HS quarterback who will switch to defense in college.”

On tall enforcer safeties “One notable thing about the two safeties that USC signed is that they are 6-3 and 6-4. It’s not an accident to see this emphasis on size from the safety position from Clancy Pendergast.”

On the signing of a pass-catching tight end “Josh Falo is unique pass catcher with his long arms and athletic ability.”

On the next Trojan tailback “Stephen Carr is the best pure running back we’ve seen from this area in a long time. He has great vision and understands cutback running.”

On signing the #1 WR “Joseph Lewis kind of went under-the-radar despite his lofty ranking, he’s a big receiver with speed and he could be the start of a pipeline to Hawkins HS.”

On Jack Sears “He plays in the same HS system as Sam and their styles are somewhat similar in terms of always being on the attack, and being good runners as well as passers. Sears is a film rat who led his team to CIF and State titles.” Shane Foley commented on the impressive running ability of Sears, who is lighter than Darnold and is a swifter runner.

On the expectations that will be there next year, how will the team handle them, will it be better than 2012 “The expectations will be there next year, the Trojans will be a top-5 ranked team heading into the season and they should be. Lots of starters back and that includes one of the best players in the country in Sam. Yes, expectations were also there in 2012 and that didn’t turn out well but there is more of a foundation now, it feels more like the 2002-2003 years under Carroll.”  Shane Foley added that those high expectations are why you come to SC.