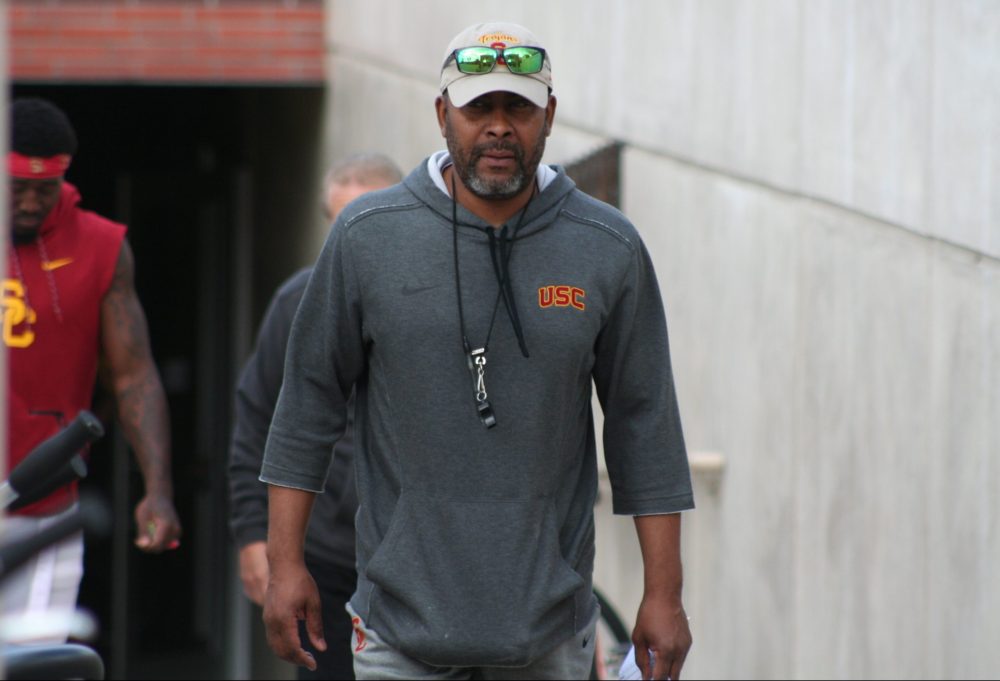 It looks as though USC running backs coach Mike Jinks will be faced with the problem that every position coach loves to have. With four tailbacks who have proven themselves capable of starting games and serving as a featured back, Jinks will need to figure out something of a pecking order and how he’ll utilize the talent at his disposal.

In a way, he’s decided to leave it up to the players.

Jinks said Tuesday morning that while he sees all of his top backs–Stephen Carr, Vavae Malepeai, Markese Stepp and Kenan Christon–seeing the field this season, it won’t be via a set rotation or with the idea to make sure they all get equal touches.

“They’ve shown they can all be an every-down back,” Jinks said. “It’s not one of those situations where I want to just roll one in on third downs…We’re going to continue to compete and the hot one or the hot two or three guys will be the guys out there playing.”

Jinks said he’s issued a challenge to his backs this fall. He’d like to see one of them step up and become the Alpha back of the group. At this point, Carr is the healthy veteran–both Malepeai and Stepp are working back from injuries–and appears to be doing that.

But Jinks likes where his group is as a whole.

During Tuesday morning’s media session, Jinks gave a rundown of his position room.

On Stephen Carr: “He looks as good as he’s ever been since I’ve been here. Just to give you an example, that was a tough injury that he had to try to come back from. Just looking at his vertical yesterday, getting reports from the strength staff, it’s increased five to six inches. And you can see it. You can see his explosion on the football field and just from a mental standpoint, I think he’s focused and ready to take his game to a whole new level, even beyond where it was when he got here as a highly-touted freshman.”

On Markese Stepp: “Markese Stepp has come back in that 225-228 range, which was huge for him. It was one of the things that we challenged him to do. He’s looked quick; he’s looked explosive. We’re bringing him on at a little bit of a different pace to make sure he’s ready to go.

I like where he is right now. Kind of challenged him to come in and set a weight goal. He hit it, and that wasn’t an easy thing to do with the circumstances that we’ve had over the last few months. One of the things that might have been a positive coming out of our quarantine situation, as Stephen said, we had to find ways to be creative even when we were going through our position meetings and things of that nature, and we were able to really step back and teach some pass protections and really kind of find out what they truly understood and what they didn’t, and learn different ways to help them learn. In that first week, those first few days of camp, I really saw him play with the confidence in which I hadn’t seen before. We all know who he is when he puts that ball in his hand. But the confidence he had in knowing his assignments and knowing his technique, it was exciting to see.”

On Vavae Malepeai: “Vavae has comeback from a knee injury. He’s got a little bit of a hamstring strain that we’re going to be patient with.”

On Kenan Christon: “Kenan probably played last year about 172-173. Kenan right now is probably at that 180-183 range, which is huge and important for him just to hold up in some pass protection instances.”

On Quincy Jountti: “Quincy Jountti, we wouldn’t have made it through last year without him. Just blessed to have a young man like him on your roster.”

On Ben Easington: “Really an unsung hero and a guy also coming back from an ACL injury who looks great, who’s had a great camp thus far is Ben Easington.”

On Matt Colombo: “We have a walk-on, Matt Colombo from Bosco. Gotta give Bosco a shoutout. The guy can play.”

Additional notes and quotes from the media call with Mike Jinks and Stephen Carr.

Jinks on his running backs’ understanding of the offense in Year 2: “Once we got back to fall camp, they pretty much ran the first couple meetings. As Graham often alludes to, we’re an execution-based offense. We have a three-day install and that install does not change. There’s always tremendous growth from Year 1 to Year 2. Whether it be Stephen, whether it be Vavae, they can get up there right now and they can break this thing down to its smallest nuance. The growth has been tremendous and you see it in their play.”

Jinks on Stepp’s eventual return from the ankle injury suffered last season: “He’s close. He’s close. He’s not where he wants to be just yet, but he’s pretty dang close. And again, he’s a young man who has a lot of football left ahead of him. We’re not going to run him into anything. We’re going to be patient with it. I truly expect to see 30 out there when we step on the field vs Arizona State.”

Carr on facing this new Todd Orlando defense in practice: “Man, I love it. I feel like they’re preparing us for a whole lot. I’m seeing looks that I haven’t seen before. I don’t know if I can spill the tea on here, but it’s amazing the different looks. I didn’t even know we could get these types of looks as an offense. It’s amazing to add more to my notebook and more to my awareness book.”

Jinks on what he can take from last year to apply to this year: “You’re only as good as the last guy in your room. Coach Helton, you guys have heard him say that not just last season but this season, especially with some of the obstacles that we potentially have to overcome. I’ve got seven, eight guys in my running back room right now. Number eight has to be ready to play, and we took that approach last year, had a freshman coming straight out of school—a lot of people thought he was just a track guy—and had a walk-on, who I didn’t know from Adam, who we had to prepare. And we threw him in there and we forced No. 1 reps to him, and to be honest with you, I wouldn’t be here if they didn’t get the job done last year. So we will continue to have that same mindset.”

Jinks on what has stood out to him in regard to the high scoring games across college football: “Tackling. I think those practices, some, most, not having their spring ball and a limited contact period when we get back from fall camp. That’s been the thing that’s jumped out on the screen for me over the last few weeks or so.”

Jinks on whether the running backs can take advantage of those potential tackling issues: “The biggest thing is we want to be one-cut runners. We want to be violent when we have the football in our hand and what I don’t want to do is have them think that the answer to that is more spin moves, more jump cuts. We want to take it to our opponent and you do that be being decisive.”

Jinks on all four backs getting playing time: “We have a pretty talented room and we’re going to get them involved one way or another, and that’s maybe being on the field together at times and not just using them in the backfield, but being able to play with some pace and do some things creatively. And we’re challenging those guys to understand when we call—they know what to do when they get the ball in their hands—but let’s say we call a pass play, and you may have an option route, a check release. What are we trying to do from a concept standpoint? Challenging those two guys to really grasp that, in case we were to decide to play with some tempo or what have you, throw them out at receiver or whatever, and that would add an element to our offense. That’s been something that they’ve been challenged with and that’s where I’ve seen some tremendous growth in both (Carr and Christon) of their games. They both have the ability to do it.”