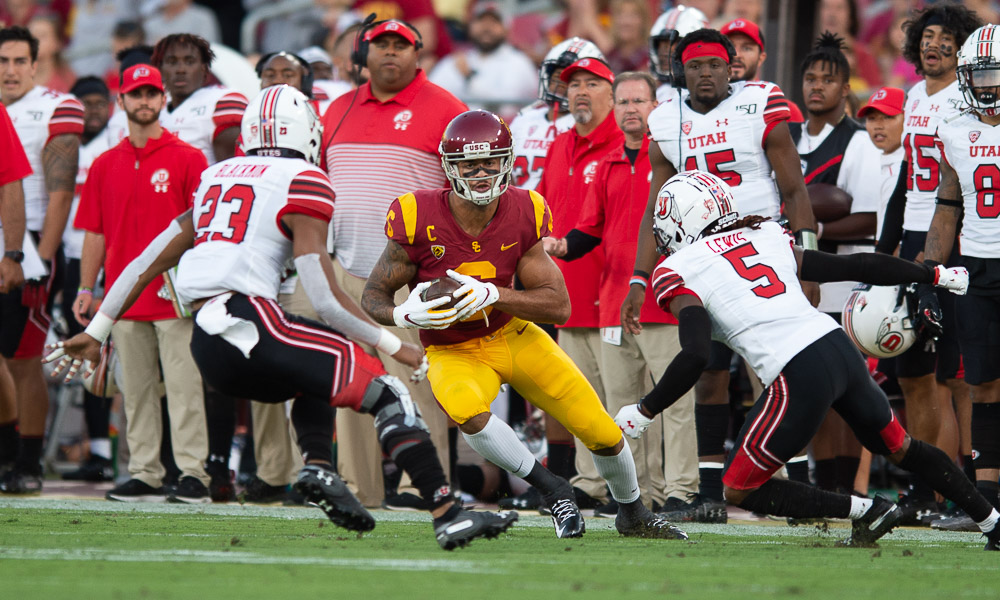 USC wide receiver Michael Pittman didn’t need to wait long to hear his name called on Day 2 of the 2020 NFL Draft, as the big pass catcher went to the Indianapolis Colts with the second pick of the second round.

Pittman became the second former Trojan selected in the 2020 NFL Draft, after offensive tackle Austin Jackson went to the Miami Dolphins as the No. 18 overall pick.

“Effective working in traffic, he’s not easy to bring to the ground,” Kiper said. “He’ll block. This kid knows how to play the game. You see the hands, the concentration, the hand-eye coordination. He has all that. And I think if you look at the second round, it’s been the hot spot for some great receivers in the NFL, and Michael Pittman, very underrated…You talk about 4.52 speed at 6-foot-4, 223 [pounds]. He will be a nightmare to try to match up with for cornerbacks in the NFL.”

“I saw that nightmare firsthand,” Riddick said. “I saw him play against Colorado in Boulder just this past winter and he and Laviska Shenault absolutely put on a show. Michael Pittman was uncoverable in that game. He caught the full array of routes – the short passing game, the slants and the hitches, the wide receiver screens, he caught the ball over the middle, he caught the ball deep down the sidelines, the back-shoulder nine routes. He did just about everything you could do and he’s going to do everything that the Indianapolis Colts need him to do.”

And the NFL Network’s Daniel Jeremiah pointed to another standout Pittman game.

“His game against Utah was the most impressive game I saw by a wide receiver this year,” Jeremiah said. “He won that game by himself. They couldn’t stop him. I love this pick for the Colts.”

Pittman finished his career with 171 total catches for 2,519 yards and 19 touchdowns. He also added a score on a punt return touchdown. His senior season was phenomenal, as Pittman’s 101 receptions is the fifth-best single-season mark in USC history and his 1,275 receiving yards and 11 touchdowns rank ninth.

Pittman also had two 13-catch games in 2019, which is tied for the seventh-most receptions in one game. His 232 receiving yards against Utah were the fifth-most by a USC player in a single game.

This is the second-straight year the Colts have drafted a USC Trojan, as Indianapolis took former USC safety Marvell Tell in the fifth round last year. The Colts also took offensive tackle Zach Banner in 2017, center Khaled Holmes in 2013, cornerback Kevin Thomas in 2010 and defensive tackle Fili Moala in 2009. In total, Pittman is the 19th former Trojan selected by the Colts franchise.