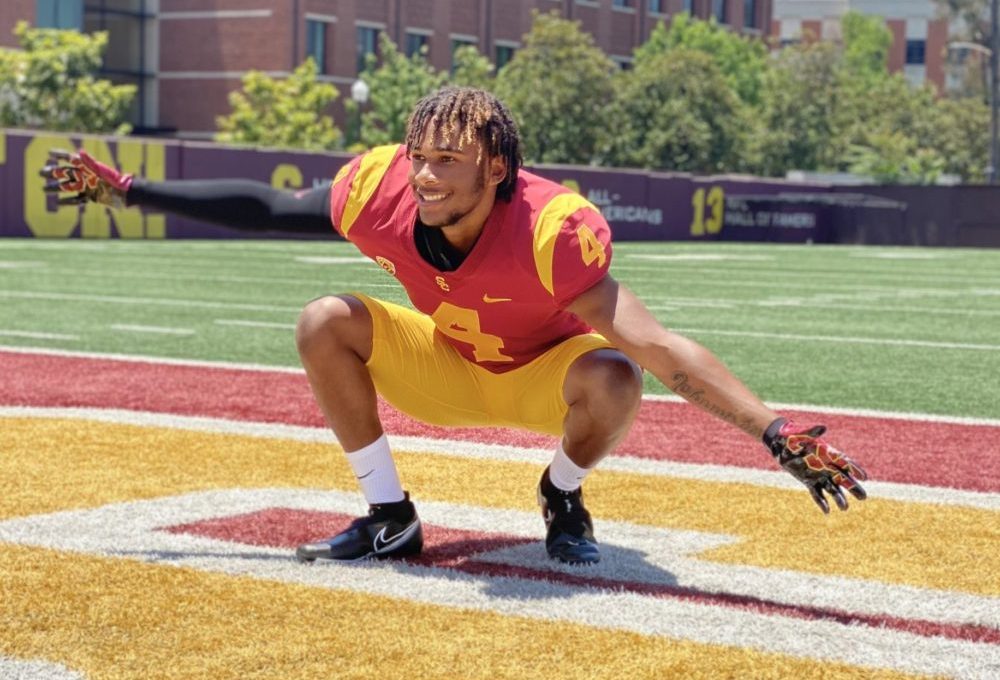 USC wasted little time in getting top prospects on campus once the NCAA recruiting dead period ended on June 1. One of the standout recruits visiting the Trojans was 2023 four-star defensive back Michael Daugherty (Loganville, Ga./Grayson).

The 6-foot-1, 180-pound safety is the nation’s No. 40 overall prospect and No. 7 safety. He holds a number of major offers, including ones from Auburn, Florida, Florida State, Georgia, LSU, Miami, Notre Dame, Penn State, Texas and others. After the USC visit on Tuesday, he was at Clemson on Thursday, continuing through his busy June schedule.

Daugherty is a versatile defensive back, likely capable of playing safety or cornerback at the next level. He’s a willing hitter and is comfortable in coverage with outstanding athletic ability.

USC cornerbacks coach and associate head coach Donte Williams has become as much of a Los Angeles destination for defensive backs as Disneyland or the beaches are for tourists.

Daugherty was in Los Angeles this past weekend for the Steve Clarkson QB Collective event and took the opportunity to stick around for an extra couple days in order to see USC.

“I was looking forward to the atmosphere and getting to meet coach Donte in person and seeing the campus,” Daugherty said of why he made the choice to visit USC on the first day of the open recruiting period.

Daugherty said the education available at USC, as well as the opportunities in and out of football, both during and after his Trojan career, are the things that will stand out about the visit when he looks back at it in the future.

The safety spot has been an area the defensive coaches have hit hard since their arrival. Defensive coordinator Todd Orlando’s scheme puts at least three safeties on the field in almost all situations. Position coach Craig Naivar said this spring that the depth is not where they’d want it both to push competition at all three spots and also to even do some of the strategic things they would like to do.

The 2021 class provided a boost at the spot. USC signed three high school prospects — Anthony Beavers, Calen Bullock and Xamarion Gordon — who all had very impressive spring performances and would seem to be able to contribute at least on special teams as true freshmen and more significantly down the line. USC also brought in safety Xavion Alford, a transfer from Texas, who ran with the starters over the second half of spring ball. And now Chris Thompson, a former Auburn safety, has announced a commitment to USC and should provide another option at one of the safety spots as a big hitter.

Grabbing safeties and defensive backs in the 2022 and 2023 class will be important for USC and Daugherty is likely to be one of those top targets as long as he continues to show interest in the Trojans. Of course, big-time programs closer to home such as Georgia and LSU will ultimately be tough to beat. But at this point, it looks like the two sides will definitely be keeping in touch.

“I’m heavily interested in ‘SC and they’ll definitely be a top school down the road,” Daugherty said.