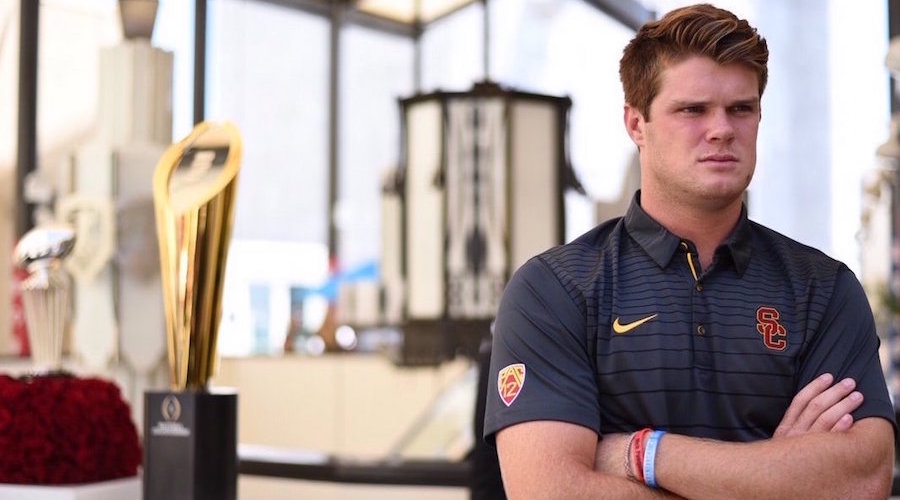 USC head coach Clay Helton, quarterback Sam Darnold and linebacker Cameron Smith met with the media on Thursday at Pac-12 media day. Here are some select quotes from the session.

On how expectations have changed from last year to this year

“We created some great memories last year for the players and coaches and everyone in our program. But I asked them afterwards, “are you satisfied?”, and to a man they said no. Because we understand that at USC our goals are to win Pac-12 titles and national championships, and the fact is we didn’t do that. That’s always our goal and expectation.”

How has Sam Darnold grown coming into this season

“He’s really impressed me with how he’s approached this off-season to become a student of the game, and our kids see that. To know who your leader is, with all that he’s accomplished, and to see him prepare like he does is a big thing for our football team heading into the season. We all see his skill set but one of the things that has impressed me the most in this process is his humility.”

What do you see from your team right now

“I see confidence. Coming off the Rose Bowl win we’ve established a culture of what it means to be a Trojan, and it’s a culture we like.”

What did you learn as a coach last year

“That it’s about the relationship you have with your players. It gives you a trust factor during adversity, the ability to tell them to trust the process. There has to be trust in those times that you’re being brutally honest to help them get better. That’s probably the biggest thing I learned from last year, that it’s not just about the X’s and O’s, it’s about that relationship you have with the 18-21 year olds, not just in the good times but how you deal with those adverse situations when they come up.”

How did your team grow last year

“In game one I thought we were an immature football team, and the maturity we gained through the year to the Rose Bowl was an important lesson. We understood it wasn’t about the hype of the game, it was about the preparation for the game. Now the challenge is to transfer that knowledge to the incoming players, to teach them our culture and how we win, and what it means to be a Trojan.”

“I think the team meeting we had after the Utah game. We talked about trusting the coaches, trusting the process.”

“I’m approaching this year same as last year. The only thing that’s changed is the expectations. I talked with Matt Leinart and he said to continue to do what I do every single day. Work in the film room, treat people how I would want to be treated, that stuff won’t change. Whenever I get asked to take a picture or sign an autograph I think back to when I was a kid in the stands and Keith Rivers coming over and signing something for me. It made my day, it made my year, so I always remember that.”

There has been a lot of analysis of your final touchdown pass in the Rose Bowl. When was the last time you watched that game and how do you describe that play

“The last time I watched the TV version was a month-and-a-half, two months ago. I’ve watched some cut up here and there of specific plays. That game gives us confidence to see what we did at the end but I can learn from the beginning of the 2nd half when I failed and how we got out of it. As far as that last touchdown I was missile-locked on Deontay, and the best way I can describe it is that I felt the green grass and so did he.”

“I think it’s going to be very important for us. To know that we have the same coordinator, the same plays, it allows us to play that much faster. Last year it was all the players going to Coach Pendergast to learn the plays, now the younger guys are able to come to us as veteran players because we already know it. That helps us to pass along to the younger players how we do things at USC.”

“One of the big things that Coach Helton preaches is to get better every day. We don’t try to look too far in the future, we just focus game by game, next game up, next play up. He’s very consistent that way. When you talk with him he talks to you like a man, he lays everything out and he tells you the truth. I know I appreciate him for that.”

How have you seen Porter Gustin develop

“I love watching Porter work, his work ethic has never changed from the day he got here. He just does some freaky things sometimes where you’re just thinking “where’s this guy coming from?” but he’s one of those guys who is always in the right spot, always doing the right thing. He’s taken a leadership style that is perfect for our team right now.”

What have you seen from Oluwole Betiku

“It’s been insane to watch him grow. When he first got here we would do a linebacker workout and he would struggle, but he wants to be great so bad. He’s very raw and it’s just fun to watch him get better.”