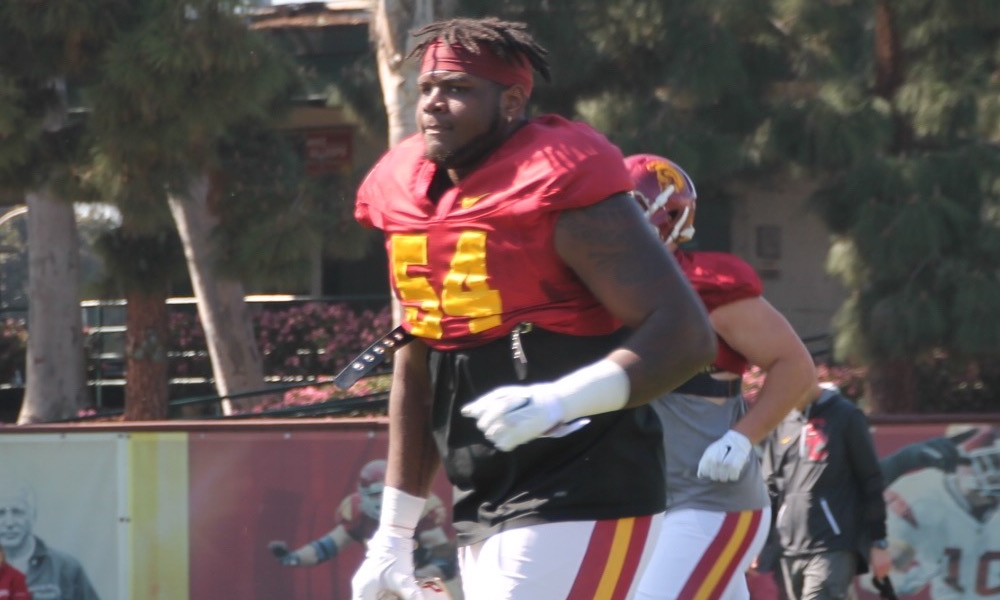 One of the keys for the Trojans on the offensive line this spring has been identifying future starters among the reserves as three senior starters will be playing next fall.

At right tackle, Chuma Edoga is one of those senior starters and so far this spring we’ve seen Jalen McKenzie taking the majority of reps as his back-up, although Clayton Johnston has taken reps there as well in addition to being the #2 LT.

McKenzie, who is the son of Raiders GM Reggie McKenzie, spent last fall as a redshirt and understands the benefit of redshirting, which not every player wants to do.

“I’m glad I redshirted because it gave me a chance to sit back and watch. When I first got out here last fall it was like learning Chinese, things were coming at you so fast, but now things have slowed down for me. I had a chance to watch the older guys and I learned a lot. The big key was getting in that playbook so when I go out there now I’m not guessing, I know what I’m supposed to be doing and that allows me to play a lot faster. I come out here now and the mental part is good but also the physical part after the work I’ve put in since I’ve been here, and all that allows me to just focus on technique.”

Part of that work was changing his body and that’s something that happens often during the first full off-season in a college strength and conditioning program.

As far as a position is concerned, McKenzie saw time at both tackle and guard last fall on the service team but so far this spring he has been strictly at right tackle.

“I don’t really have a preference on position in terms of being a right tackle, a right guard, a center, whatever. Wherever coach Callaway wants to put me. For me it’s just about honing in on the technique and fixing the little things that I was doing wrong when I first came to fall camp. I think I’ve done a good job of narrowing those things down and it’s just a matter of being consistent.”