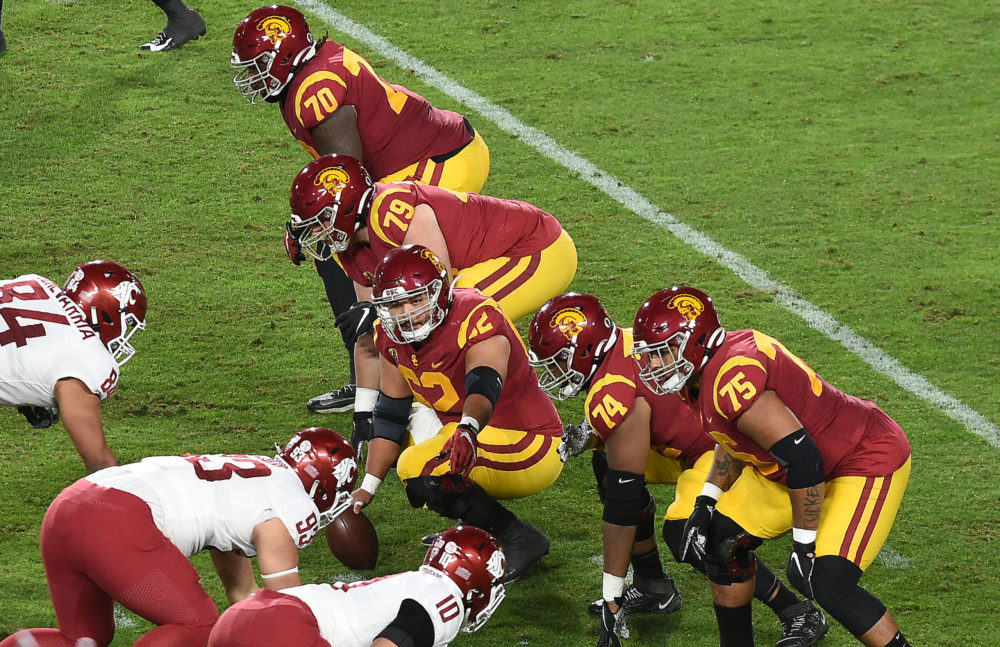 Quarterback Kedon Slovis, USC’s talented group of wide receivers and the Trojan running backs are sure to make plenty of plays this fall. But no position group on that side of the ball will likely have as much of an impact on USC’s season than the offensive line.

New position coach Clay McGuire inherits a fairly veteran group, as the Trojans bring back starters at four positions and several backups who have seen the field. He won’t have left tackle Alijah Vera-Tucker, who opted to leave early for the upcoming NFL Draft, where he could become another Trojan offensive lineman selected in the first round.

Back are right tackle Jalen McKenzie, right guard Liam Jimmons, center Brett Neilon, left guard Andrew Vorhees and top backups Justin Dedich and Liam Douglass. Third-year lineman Jason Rodriguez will have an opportunity this year to push for playing time, providing another piece to what should be a competitive spring ball up front.

McGuire joined Jordan Moore and Shaun Cody on Trojans Live on Tuesday night, and discussed his path to USC, what he thinks he might have in his position room, and how important development is to the position, and will be to the group this spring.

First, McGuire was asked about his familiarity with this offense, as both he and USC offensive coordinator Graham Harrell played for and/or coached with Mississippi State head coach Mike Leach at both Texas Tech and Washington State.

“There’s some familiarity,” McGuire said. “Obviously we go back a long ways. The first thing everybody is going to talk about is our ties back to coach [Mike] Leach. Obviously we played together and I was a coach on staff when Graham was their quarterback at Texas Tech, and we were also able to coach together there at Washington State as well. It’s been pretty neat to see all these guys from that tree kind of go off and put their own spin on things. I think in this business, familiarity and continuity is really important, and I think I was able to bring that to the table coming here.”

McGuire gave some of the credit to Harrell for his arrival at USC.

“A lot of it had to do with coach Harrell,” McGuire said. “When they made the change on the offensive line, I know they interviewed some guys. Eventually they reached out to me, I was able to interview and a couple days later I was out here in Southern California. So it was kind of surreal for me. This is one of those jobs — you get in the coaching profession to get a chance to coach at a place like Southern California. Being in the conference for six years, SC’s always been the standard of the Pac-12 and I’m excited to be a part of it and be on this side of it for once.”

Missing Vera-Tucker at left tackle opens a huge hole there, especially considering the injury history of USC quarterbacks over the past three seasons. USC needed to use three quarterbacks in both the 2018 and 2019 seasons, and Slovis suffered an injured shoulder on the final play of the 2020 Pac-12 Championship Game against Oregon.

McGuire was asked about the players he has returning up front.

“I was hoping they’d do a good recruiting job and get him to come back for that extra year. That would have been nice,” McGuire jokingly said of Vera-Tucker.  “That would have made my life a little bit easier. But it’s a good group. It really is. They’ve played a lot of football. We have some experience. We also have some good, young talent that will come in and provide competition. And just being around what little we’ve been allowed to be around up to this point, they’re really good kids, the work really hard and they’re smart. And I’ve been really impressed with the amount of information and knowledge that they’re able to retain, and so I’m excited about going out there and putting my spin on things, and hopefully our plan is to push this thing forward and really be a force up front next year.”

USC is likely to rely heavily on the passing game against this season, but it’s clear that the Trojans aren’t going to win consistently, or beat good opponents, without the addition of some kind of running game.

“It has to be very complementary,” McGuire said of the running attack. “We’re going to see certain looks in boxes that are always going to be advantageous to run into. And so I think something that coach Harrell has done a good job, and definitely was great as a player, was making sure we were always into the right runs and the right looks. What that allows us to do up front is to really hone in and get great at blocking certain looks and certain fronts for certain situations so that we don’t have to practice the 15 exotic looks that, somebody tries to force a square peg in a round hole. When we can get into the right plays at the right time, we should be very efficient in the run game.”

McGuire will also be tasked with quickly developing some young players, such as second-year linemen Jonah Monheim, Courtland Ford and Casey Collier, as well as the three other 2020 signees and the three new additions in the 2021 class, when they arrive in the fall.

Development is clearly an important concept for McGuire, and he spoke about that when asked about what he looks for in a lineman. USC has traditionally signed highly rated offensive linemen, but there have been a flurry of three-star prospects of late, which is what McGuire has traditionally had to work with during his previous stops.

“They have to have the measurables and the ability to do those things you’re talking about to get to that level, McGuire said. “As Shaun [Cody] could tell you, it’s the ultimate developmental position. It doesn’t matter if you play one year to 15 years in the NFL, you have to find ways to keep pushing yourself and find ways to make yourself the best football player you can possible be. And so obviously in the evaluation process you’ve got to make sure that one, guys have the measurables that you’re going to want and that you should be able to get here. Two, they have the ability and work ethic and the discipline to trust the process and trust the program you put them in to be able to develop their skills. And I think we’ve been able to tweak some things in the offseason and implement some things that we’ve done in the past, and like I said, I think it’s the ultimate developmental position and if you’re not developing, you’re not getting any better. So that’s the goal, is when they get here to have a baseline. And when they leave here, that may be three or four years, that they’re at the peak level of performance they can possibly be, to give themselves a chance to play at the highest level.”

McGuire took the development theme to the veterans on the team as well, as he has an important task this fall of getting the line shaped up and operating at a high level. Finding those right pieces is a priority.

“The number one thing is we have to go out there and really develop—you’d like to say ten, but you really, maybe even just a top eight,” McGuire said. “When you get to the NFL level you really only have seven to eight o-linemen on roster. You sit there and people say they have two deep is a lot of time inaccurate. Usually you have to find that core to develop and build some continuity and chemistry around that group. I think that’s the most important thing, is to find out who our guys are and making sure we’re getting our best five out there and create competition from that standpoint. And then from there, once we do that, is to create chemistry and continuity amongst that group so we can play at a high level together. And then as we get into the schematics of things, that thing will continue to evolve wherever coach Harrell takes it.”

Whether McGuire can find the best five and then turn that group into one of the conference’s best units could go a long way toward determining what the finish line looks like for USC’s 2021 season. There is once again plenty of talent on this roster to take on a favorable schedule, but getting things right up front will be an absolute key.