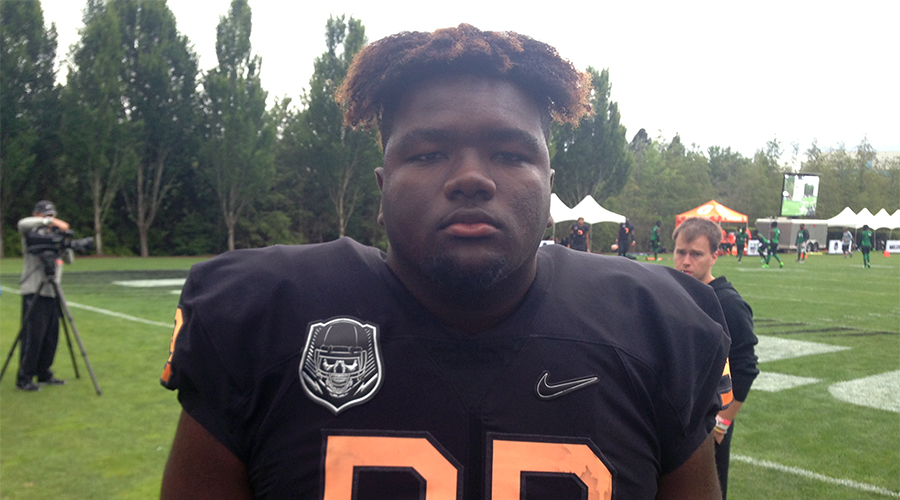 Regarded by some as the top defensive tackle prospect in the entire nation for the Class of 2017, Marvin Wilson arrived at The Opening Finals in Beaverton, Oregon with a fierce reputation, and when it was all said and done, he had more than lived up to every ounce of the hype.

The Bellaire (Texas) Episcopal star was a force throughout this past weekend, showcasing surprising athleticism and solid technique to go along with the 6-foot-4, 329-pound size that he brings to the table.

Ultimately earning the MVP award for defensive linemen after shining in the one-on-one championships on Sunday, Wilson came away from the prestigious event extremely pleased, and not just with his performance.

“It was just by far the best experience of my life,” Wilson said. “I got some of the best coaching that I’ve ever had. I learned so much in just one week, and I learned stuff off the field too. I went against some great offensive linemen – Creed [Humphrey], Cesar [Ruiz], Nick [Brahms]…it was just really good competition, and I got some good, quality wins.”

“I’ve got my ten that I just released a couple weeks ago, and I’m sticking with that right now,” Wilson said. “I might make a top 5 before the season starts. If not, then after the season for sure.”

While Wilson currently claims no leaders out of that group of 10, it’s apparent that the Trojans are a major player in his recruitment, and it has everything to do with Defensive Line Coach Kenechi Udeze, as well as the rest of the coaching staff at USC.

“I have legit high interest in USC,” Wilson said. “I talk to Coach Udeze a lot. We’re in contact every day. He’s the kind of guy that I want to surround myself with. And that’s the thing with Coach [Clay] Helton and Coach [Tommie] Robinson too – they just set themselves apart. They hit me on a personal level real hard.”

Earlier this summer, Wilson actually got a chance to meet Udeze in person, as well as to watch him in action as a coach, and the experience left a lasting impression.

“There was a satellite camp in Houston, so I signed up and went out and chilled with Coach Udeze,” said Wilson, who has been told by the USC coaches that he is versatile enough to line up at any of the three interior defensive line positions for the Trojans. “I just watched how he looked at different players, watched what he said they need to do and stuff like that, and I just liked how he coached.”

With Wilson having developed that relationship with Udeze and the rest of the Trojans staff, he now has plans to make it up to the USC campus later this month for an unofficial visit. That trip will likely take place on July 23, immediately following a basketball tournament in Las Vegas that he is participating in.

“I’m going to try to get my mom to come out with me,” said Wilson, who has already taken unofficials to Alabama, Florida State and LSU. “Mostly, I just want to go and see what the school is really like. I can’t just make my decision off of one official visit – I have to see a school twice. So, I basically want to see what the school is like without football, and find out what the atmosphere is like and everything like that. That’s really what this visit is about.”

While Wilson hasn’t set up any of those official visits, as he alluded to, there is a very good chance that he will be using one of them on USC.

“I’ll most likely visit USC,” Wilson said. “It’s so far away, you can’t just stop by there any time like I can with Texas and a lot of the other schools.”

Hoping to take all five of his visits this coming fall and winter, Wilson has some specific factors in mind as he takes a closer look at each program.

“Will I be comfortable in the environment?” Wilson said. “Does the education have a high value? I want to get into broadcast journalism, so do they have a good program? And also playing time – whether or not I can play early.”

Wilson plans to go through the entire process, with a final decision likely to come on signing day.