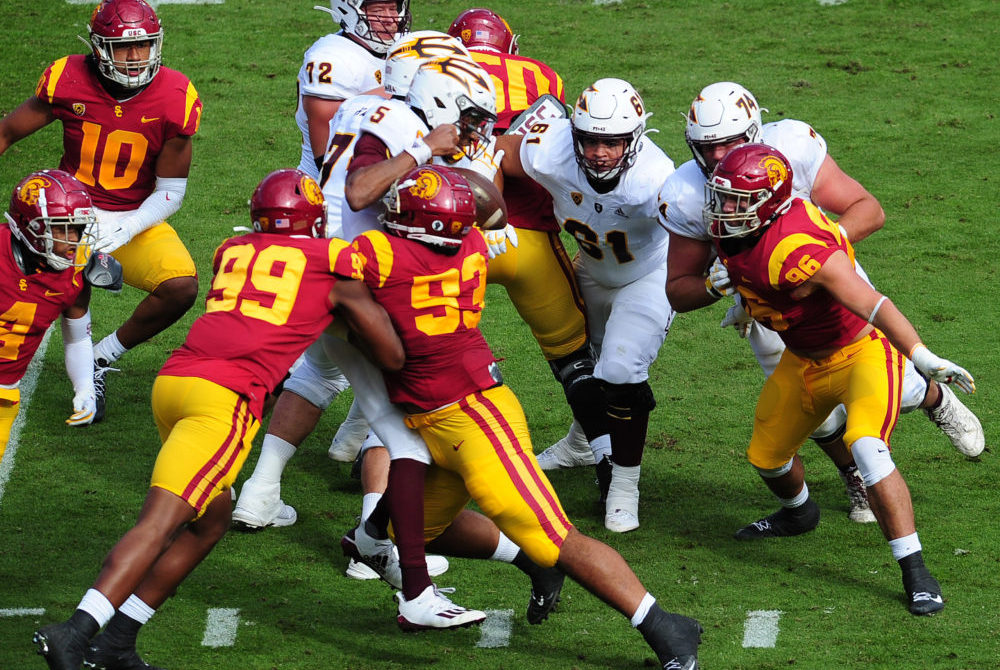 USC defensive tackle Marlon Tuipulotu was named the Pac-12’s defensive lineman of the week for Week One of the conference season on Monday.

The 6-foot-3, 305-pound redshirt junior was all over the field for the Trojans in USC’s 28-27 win against Arizona State on Saturday.

He finished the game with eight total tackles, including two tackles for loss and USC’s only sack of Arizona State quarterback Jayden Daniels.

“Defensively, it was Marlon,” USC head coach Clay Helton said of his standout lineman during his Sunday evening media call. “Tuipulotu was just a rockstar all day. Huge plays, obviously made a huge play in making a tackle on [Frank] Darby that ended up having him unfortunately go out of the game. Eight tackles on the day, two tackles for loss, a key get-down of Jayden Daniels to get us the ball back on third down. I was really proud of him on the day.”

Helton spoke glowingly of Tuipulotu throughout fall camp and Tuipulotu is arguably the most important player for USC’s defense this season. The Trojans are playing this year without fellow defensive lineman Jay Tufele, who opted out of the 2020 football season in order to prepare for the 2021 NFL Draft. USC is also without senior defensive tackle Brandon Pili at this time, as he underwent surgery for a broken finger late last week.

Behind Tuipulotu, USC has second-year players Stanley Ta’ufo’ou and De’jon Benton and true freshmen Kobe Pepe and Jamar Sekona. The hope is that all those players can provide strong depth this season, but none are going to puth Tuipulotu for a starting spot.

As for the rest of the Pac-12 weekly awards, USC quarterback Kedon Slovis was nominated for Pac-12 offensive player of the week, safety Isaiah Pola-Mao for defensive player and wide receiver Bru McCoy for special teams player and freshman of the week.