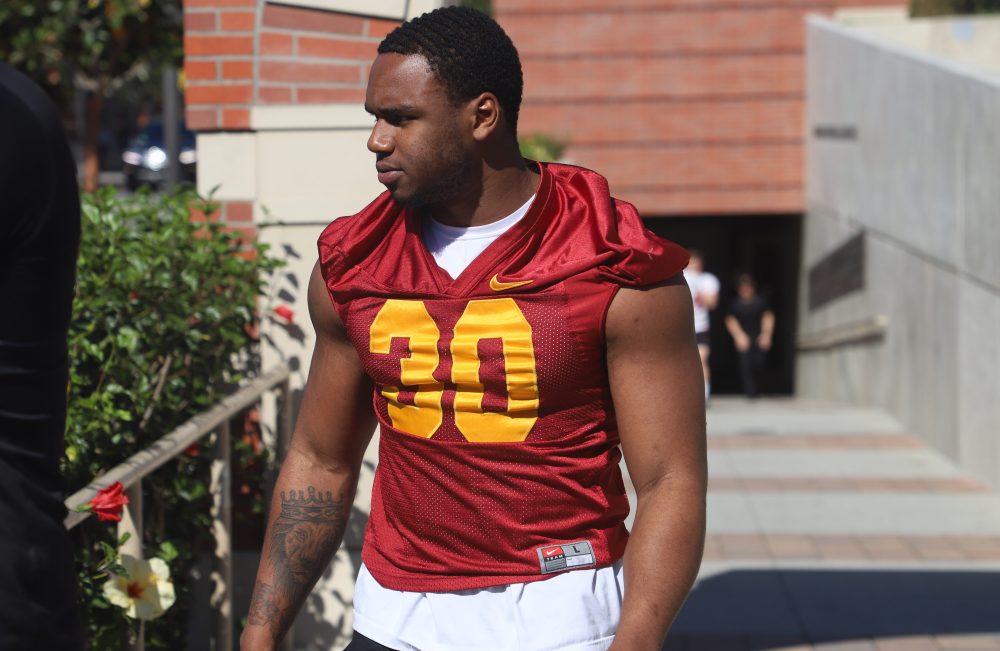 USC head coach Clay Helton spoke with the media on Monday morning as the Trojans continue through their game week prep for Saturday’s season opener against Arizona State. He spoke about the ASU coordinators, Markese Stepp’s health, expectations for Brandon Pili and other topics.

The team was in the Coliseum on Saturday for what Clay Helton called a “mock dress rehearsal.” He said it was exactly what the team will do this coming Saturday in terms of timing and preparing for the game against Arizona State. The team went through about “a half of simulated football,” according to Helton. He was asked why the team didn’t scrimmage on Saturday and he said it was a decision he made as head coach, based on the fact that they had some scrimmage situations throughout the previous week and they were going to have very physical days on Sunday and Monday. He said this has been the most physical camp USC has had in several years.

“We were actually in a padded practice yesterday as well as a full-pad practice today, so to be able to have three days, back to back to back, with an early Saturday game, I didn’t think was advantageous to our team,” Helton said.

* Helton said he will release the depth chart and the team captains on Friday.

* Helton said that with new coordinator on both offense and defense for Arizona State, the game plan will be more about personnel matchups than specific scheme preparation. He said (and Graham Harrell echoed) that it’s tough to know exactly what Marvin Lewis will bring to the defense, and that USC’s offense is built on executing what they do well rather than scheming around specific defenses. On the other side, Helton said they’ve watched some Boise State offensive film to get an idea of new Arizona State offensive coordinator Zack Hill, though they understand there will be some other things added to take advantage of what quarterback Jayden Daniels can do.

* Helton said he is anticipating Markese Stepp playing against Arizona State with the way he’s progressing.

“I saw a lot from him yesterday,” Helton said. “I thought he had by far his best day.”

Helton said that in talking to him after practice yesterday and today that he feels really good and the most confident he’s been. Helton said he’s dealing with a little bit of a turf toe right now, but that he looked really good yesterday.

* Helton said Brandon Pili came back to campus a little bit later than other players and he was one of the players who needed to get in shape following the extended time away. Helton said Pili checked back to the team in the 340s, and needed to get back down into the 320s. Helton said he’s done that and is in football shape.

“He’s going to be a factor this season,” Helton said, adding that Pili could play nose tackle or 3-technique. Helton said Pili is one of the guys who required a double team, which should open things up for the linebackers. But he added that he still wants to see consistency from Pili.