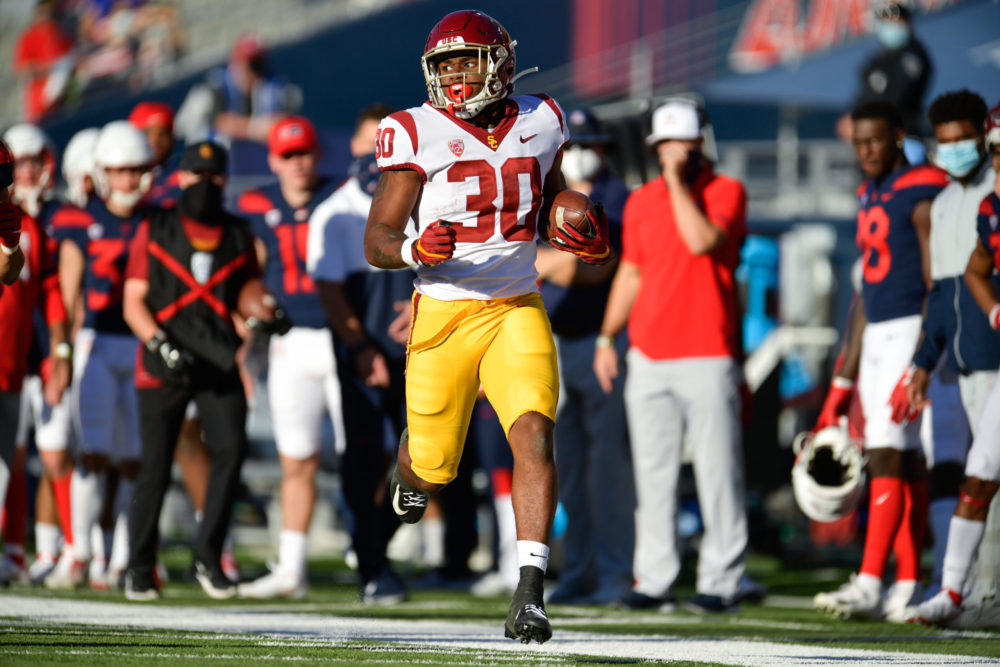 Running back Markese Stepp became the latest USC player to enter his name in the transfer portal, as the redshirt sophomore now has the opportunity to be recruited by other programs and potentially finish his college career elsewhere.

Stepp finished the 2020 season with 165 rushing yards on 45 carries — both good for third on the team — and three touchdowns. His 3.7-yards-per-carry average was the lowest of the four tailbacks this season after he led the group by posting 6.4 yards per carry during the 2019 season.

If Stepp does elect to transfer, it’ll be a major “What if?” story as far as what he might have been able to accomplish at USC if not for injuries and an offensive scheme that seemingly didn’t always play to his strengths. After coming into the season looking like he might potentially lead the way on the ground, this decision to enter the portal does not come as a surprise at all given the way the season played out.

Stepp had an impressive game against Notre Dame last season, when he rushed 10 times for 82 yards and a touchdown. He was putting together a similarly-impressive performance against Arizona when he suffered an ankle injury that cut his season short.

There was a long rehab from that injury, but he began the 2020 season by scoring touchdowns in the first two games and carrying the ball 26 times combined. Stepp then missed the Utah game with what head coach Clay Helton called a pectoral strain. He returned for both the Washington State and UCLA games, but had just six carries for five yards. The UCLA game was especially strange, as his only carry came late in the game and afterward, Helton said they made a decision to go exclusively with Stephen Carr and Vavae Malepeai during that game. Stepp only came on when Malepeai suffered an injury.

Stepp did receive 13 carries in the Pac-12 Championship Game against Oregon, but was held to just 25 yards and a short touchdown run.

His departure would contribute further to a USC running back room that could be in flux this offseason. Both Carr and Malepeai have the ability to return, as the NCAA granted an extra year of eligibility to all players this year. But both have dealt with injuries throughout their careers and could look to potentially get a shot at the NFL now rather than risk another injury in college.

If all three elect to leave, that would mean Kenan Christon would be the only returning running back for the Trojans, though the position will get a boost from early enrollee Brandon Campbell this spring. USC is also still in the mix for 2021 running back Alton McCaskill and it wouldn’t be surprising to see the Trojans chase a running back in the transfer portal. Utah tailback Jordan Wilmore entered his name into the portal earlier this month and he spent much of the 2019 recruiting cycle as a USC commitment.