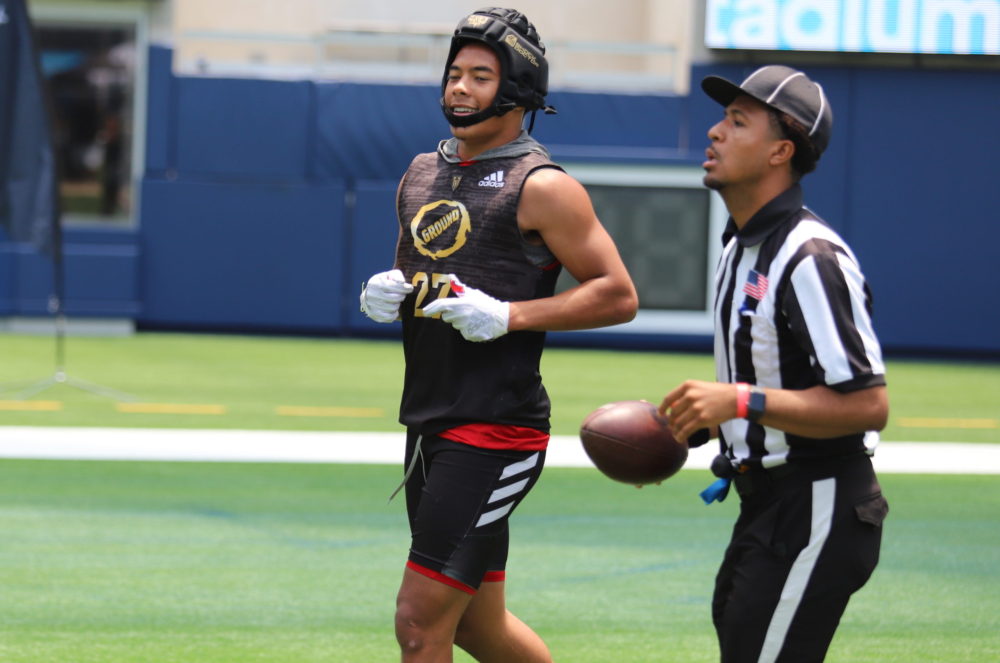 Makai Lemon is capable of doing just about everything on a football field. His supreme athleticism in a 6-foot, 180-pound frame has turned him into a five-star recruit in the 2023 class, the nation’s No. 20 overall prospect and No. 2 athlete.

USC offered in March of 2020, and since then, Alabama, Florida, Georgia, LSU, Michigan, Oklahoma, Oregon, Tennessee, Texas and plenty of others have followed suit.

Lemon was a three-way standout this past spring as a sophomore for Los Alamitos. In just six games, he caught 43 passes for 756 yards and nine touchdowns, completed a pass for 48 yards, registered four interceptions including one returned for touchdowns, tallied 15 tackles, four passes defended and returned five punts for 132 yards, including one for a touchdown.

There’s no wonder Lemon finds himself at the top of the target list for so many Power 5 programs. And this week, he’ll start the recruiting process in earnest, with visits to several top options. On Thursday, Lemon will visit USC, then he’ll trip to Oklahoma on Friday for the weekend, along with good friend and teammate, five-star 2023 quarterback Malachi Nelson. Nelson is expected to choose Oklahoma when he ultimately makes his decision in mid-July, but USC is also in pursuit. Lemon said he’s ready for the questions and the pressure to join Nelson at whatever program his quarterback chooses, but he’d determined to run his own recruitment, separate from Nelson’s.

“That doesn’t affect me at all,” Lemon said of Nelson’s upcoming decision. “I’m going to still go through the recruiting process, still checking out all these schools. That has nothing to do with me.”

In addition to USC and Oklahoma, Lemon will also visit Michigan in June, right at the end of the month. The USC coaches have done well to get many of their top targets on campus already this month, and have made the 2022 and 2023 recruits feel like priorities. Lemon said he’s looking forward to getting on campuses for these visits.

“I want to see a little bit of everything,” Lemon said. “See the campus, the school, meet the coaches in person.”

The five-star prospect already has a strong relationship with the USC staff as a whole.

“I’m super comfortable with them,” he said. “We’ve built a great bond and I’m talking to them on the phone every week, talking to all the coaches, still trying to build a relationship. Everything is good with ‘SC. I like the school a lot.”

While he plans to take his time with a decision on a school — Lemon did say he’ll begin to narrow down his list of schools in the next month or so — one decision has already been made.

He’d likely be a standout wide receiver or cornerback at the next level, and could probably line up at two or three other positions as well, but Lemon said he wants to play offense in college.

“I want to play offense as a receiver,” Lemon said, adding that part of his recruiting process will be to get a good sense of how he’ll be used on that side of the ball, and if the coaches will live up to the plan they lay out for him.

He said he sees himself able to fill the same kind of role Amon-Ra St. Brown did at USC. St. Brown lined up both inside and outside, served as a special teams returner and even lined up in the backfield when the number of available bodies were low at the running back position.

“Inside, outside, use me all around the field, not just one position,” Lemon said of his goals in fitting into a college offense.

USC doesn’t often struggle to find wide receivers during any recruiting class, but Lemon is one of those special talents that the Trojans are often able to reel in and turn into household names early in their careers. He’ll definitely be a target to watch in the 2023 recruiting class.