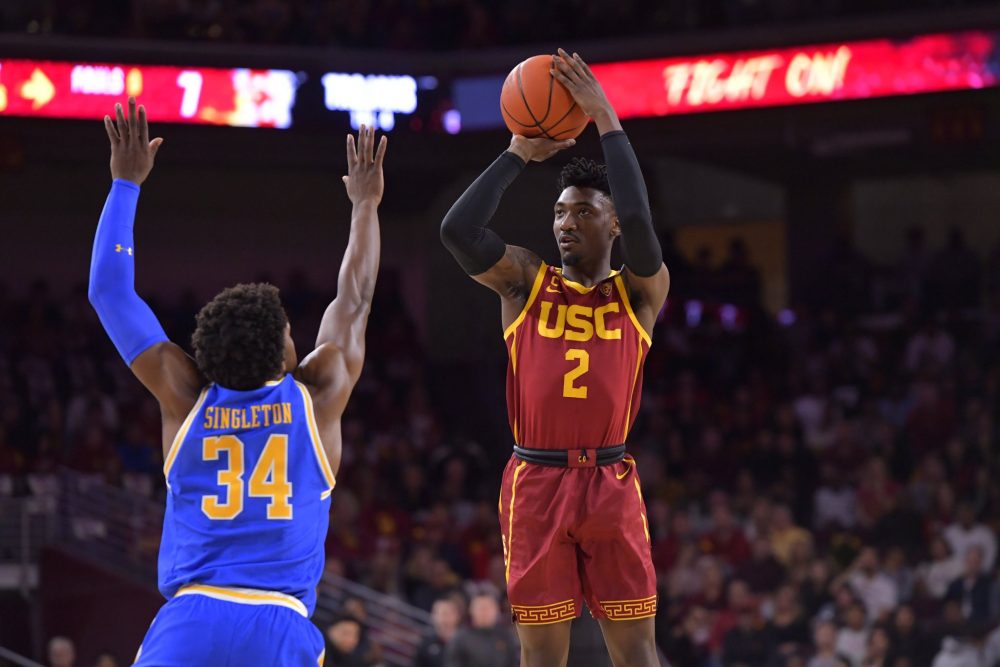 After three exciting and important wins at home, the USC Trojans should be safely in the NCAA field. For the Trojans, the games this week in Las Vegas are about trying to improve their resume and obtain a higher seed. Before we focus on the Pac-12 Tournament, a few more thoughts about the UCLA win.

The buzzer beater three by Jonah Mathews brought a roar from the largest Galen crowd this season, and that noise and support in Galen should have helped the Trojans with basketball and football recruits who attended the game. It was a tremendous college basketball atmosphere.

The 54-52 score caused me to reflect way back to SC’s 1969 win over number 1 and undefeated UCLA in the last game of that season. The Bruin star was Lew Alcinder, who later changed his name to Kareem Abdul Jabber. The game was played before the shot clock era and the three point line, and the Trojans employed a “stall” offense to try to close the very large talent gap. SC moved the ball around the court until a very high percentage shot became available. That sometimes took a minute or two. That game was UCLA’s first ever loss at Pauley Pavilion, 46-44 on a last second shot. There was some of that same drama last Saturday.

The Trojans are losing two four-year players after their tournament run is over. Both Jonah and Nick have had a big impact on Trojan basketball. Jonah is the career leader in made three point shots. Nick is second in career rebounds. Jonah made the buzzer beater last Saturday, and Nick had a couple of tip ins this year which won games. Both are moving up the list for career points.

As importantly, they are the type of people that should make SC alumni and fans proud. Nick can occasionally lose his focus during a game and commit an unnecessary foul, but off the court he is smart, well spoken and very reflective in interviews. Jonah is a natural leader and is very candid when answering any question. They will both be missed. Nick gets a lot of criticism from fans at times, in my opinion more than he deserves.

Jonah was named All Pac-12 second team, and is on the All Conference Defensive Team.

Onyeka in on the All Pac-12 first team, and the All Freshman team. He is also on the All District 11 first team, which includes players several western states. Half of the players on that team are from the Pac 12. Surprisingly, Big O was not named PAC 12 freshman of the year; that honor went to Zeke Nnaji of Arizona

The Trojans Have A Good Chance To Make The Conference Finals

As the four seed, SC has a first round bye this week and on Thursday will play the winner of the Arizona-Washington first round game. If SC wins, they will likely play Oregon in the conference semi finals on Friday. At first glance, this looks like a tough draw. Oregon’s NET ranking is 12, Arizona’s is 14, and Washington’s is 55. SC is rated 45. I’ve given up trying to understand the NET; how Arizona keeps that ranking after dropping several games is the last few weeks is a mystery. There is not a great team in the conference this year. Oregon had the best season, but they will be without their second best player this week due to injury.

Arizona enters the tournament after three recent losses, including to SC at Galen. They are not playing their best basketball. They probably have the most talented roster in the conference, but even when they were playing better a few weeks ago, it seemed they were not playing up to their talent. Plus, there is a new negative in the mix. Star freshman point guard Nico Mannion announced on Sunday that he is entering the draft this Spring. The timing of the announcement before the season is over is very curious, and might have resulted from or cause some problems in the locker room.

There three freshman stars have led the team all year. Mannion averages 14 points and has an assist to turnover ratio of 2:1. He is streaky, and makes only 39% of his shots. He was named to the All Pac-12 second team.  The other freshman guard, Josh Green, did not play when Arizona was in LA. He averages 11.7 points and 4.6 rebounds, and makes 37% of his shots and 33% from three. He has a very smooth shot, but is also inconsistent.

Freshman forward Zeke Nnaji has been the Cats most consistent and most important player. He averages over 16 points and 8 1/2 rebounds, and makes 57% of his shots. He is on the all conference first team. As a team the Cats are 44% from the field and 36% from three.

While Arizona has underperformed lately compared to its talent, there may not be a team which underperformed more over the season than UW. They have two five star freshman forwards, and after a very good start that included a win over Baylor, they lost practically every game and finished the season in last place in the Pac 12 with an overall record of 15-16.  They lost their transfer point guard in early January due to academics, and will not have him this week. He might be able to play next week, if the Huskies have a next week, as the scholastic quarter is ending. The Huskies rebounded at the very end of the season by winning three of their final four games.

They are led by freshman forward and All Pac-12 first teamer Isaiah Stewart. He averages 16.7 points and 8.7 rebounds, and is a big inside presence. He made 56% of his shots, mostly around the rim.  His fellow five star freshman forward Jaden McDaniels has a very good shot and is very athletic, but didn’t do as well this year. He averaged 13 points and almost 6 rebounds but made only 40% of his shots, though he was very good at 38% from three.The third player who is very important to the Huskies is 6’6” guard Nahziah Carter who averages 12.5 points and 5 boards and was successful on 44% of his shots and 38% from three.

SC was hammered in Seattle in the first weekend of conference play, with the Huskies big men dominating. The Trojans as a team made only 20% of their shots in that game, which was the final game for point guard Quade Green before the suspension, but his presence didn’t impact the result. The Huskies would still have won by 20 or more without him. In the return match, USC beat the Huskies a few weeks ago at Galen.

Which team should USC fans root for in the Wednesday matchup of these two teams?  If the question was asked a week ago, the Trojans would have clearly preferred to play UW. But after the final regular season games, it’s not an easy question. The good team on a slide or the bad team on a role?  I think the Trojans will beat either, in part due to the Trojans’ bye the day before. In my mind it is a toss up as to which team poses the greater challenge right now.

If the Trojans win on Thursday, they will have a semi final matchup on Friday, likely against the league’s best team, the Oregon Ducks. The teams only played once this year in Eugene. In that game the Trojans came from behind and lost a close game. The Ducks are led by the Conference Player of the Year, point guard Payton Pritchard. He averages 20.5 points and has an assist to turnover ratio of 2:1. He does everything for Oregon, and is the team leader and spark plug. He makes 46% from the field and 41% from three, and takes and usually makes the big shots.

The Ducks also got very good play from sharp shooter guard Will Richardson. He averages 11 points and makes 48% from the field and 47% from three. But Oregon’s second best player, Chris Duarte, is injured and will not play this week. He is an honorable mention all conference player and honorable mention defender. He averages almost 13 points and was the difference in the Trojans’ tough loss in Eugene. He is long and gets his hands on a lot of balls. His absence makes the Ducks mote vulnerable.

If the Trojans and Ducks play Friday, USC would have had a decent chance to win if Duarte was healthy, and the chances are much better now. It’s not a bad bet to go with the Trojans to get to the finals on Saturday.