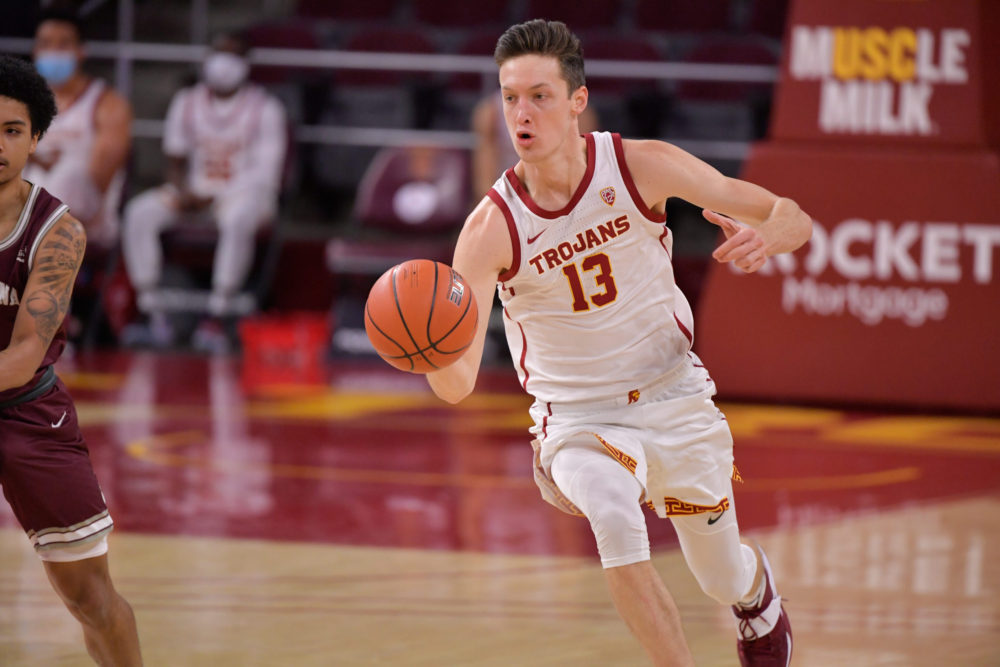 This week’s AP poll lists the Trojans at No. 17. It has been a slow march into and then up the rankings. The regular season is in its last three weeks and the Trojans have continued their strong play. The USC season record for wins is 26, set in 2016-2017. That total included a full 31 game regular season, two wins in the Pac 12 Tournament and two in the NCAA Tournament. It appears that USC will play 26 or 27 regular season games this year, depending on whether the Oregon game is rescheduled. The Trojans are currently 17-3 and could break the season win total record in this shortened season, which would be a major accomplishment.

Everyone associated with the basketball program knows that all of the team goals are still ahead of them: set a new team record for wins, win the regular season conference title, win the Pac-12 Tournament, and make a run in the NCAA Tournament. The remaining schedule is a challenge. USC hosts the Arizona schools this week, travels to the mountain schools the next week, and then hosts Stanford and visits UCLA. Potentially a home game against Oregon may be added. There aren’t any “easy wins” here and USC will need to play at a high level in all of these games.

Drew Peterson’s Performance Has Fallen Off

Drew’s season has really been a combination of two different mini seasons. In the first thirteen games he averaged 10 points and 5.5 rebounds. He scored in double figures in eight of these games including the first three, the last four and five of the last six, and scored a season high 19 against BYU.  Over this stretch Drew made 47% of his shots and made 14 of 31 (45%) from three.

In the first half of the season Drew averaged 3.6 free throws attempts per game and made 72% of his foul shots. He also averaged 5.5 rebounds and had 8 or more boards in five of the thirteen games including the last three of games and four of the last six. In the thirteenth game against WSU at home he finished with 15 points and a season high 11 rebounds. And during this stretch he averaged 1.7 turnovers per game.

Everything seemed to change for Drew at Oregon State possibly due in part to his inability to run the final possession as designed in the two point loss. Starting with that game and in six since, Drew has averaged 5.8 points and scored in double figures twice, in the OSU loss and in the win over Stanford. In these seven games he scored two points twice and three in two other games.

He has averaged 2.8 rebounds over this stretch with a high of 5. His shooting percentage has fallen to 27% and 22% from three, though he has improved at the free throw line to 83% on only 1.7 attempts per game. His turnovers are up to 2.4.

What happened? The coaches and Drew would like to know. He has gone from one of the Trojans main players to not starting the second half in the win over WSU. He missed an uncontested layup in the first half against the Cougars and took an open corner three which rimmed in and came out. Drew has not made a three in the last three games. He needs to find a couple of easy shots to begin to rebuild his confidence.

Drew is a major part of this team. If he can’t find his way out of his slump pretty soon, it greatly reduces the margin for error for the rest of the roster.

The Sun Devils have had a very disappointing season. They were a preseason pick to contend for the conference title but Covid and injury issues have been a big problem and they have not shot the ball well. They suffered a big loss when Romello White, their best inside player over the prior three years, surprisingly entered the transfer portal and left last spring.

ASU has missed several games due to the virus. They have played only 16 games so far and are 7-9 and in ninth place in the conference with a 4-6 record. Their NET ranking is 145 (USC is 15) and their offensive efficiency is a poor 165th and defensive efficiency a disastrous 244th. (The Trojans are 45th and 15th respectively.) In their first game since January 30 after a Covid forced interruption, the Devils lost on Thursday at home to Oregon 75-64 and then beat OSU over the weekend 75-73. In the win against the Beavers ASU made 42% of their shots but only 26% from three. Leading scorer Remy Martin made only 5-18 from the floor but he got to the line sixteen times and converted twelve. They finished with 12 more free throw attempts than the Beavs which was the difference in the game. On the season the Devils make 43% of their shots, 32% from three, and 72% from the line.

Freshman stars Josh Christopher and Marcus Bagley missed the OSU game with injuries. Christopher played against Oregon but did not play on Sunday due to a lower leg bruise. He is listed day to day but will likely be ready to face the Trojans on Wednesday. Bagley has had ankle and lower leg problems over the course of the season and his status has not been updated. Former Trojan commit Taeshon Cherry has played in only seven games and averages 3.9 points and 2.3 rebounds. He is currently not with the team for “personal reasons” which likely means he will be in the transfer portal this Spring.

Senior point guard Remy Martin leads ASU averaging 19 points, 4 assists and 2.6 turnovers. He was a preseason All American candidate but has not had the season Coach Bobby Hurley hoped to get from his uber quick star. Martin has made 44% of his shots, a very low 30% from three and 81% from the line.

Alonzo Verge is a solid scorer, but his shooting percentages are down. The 6’1” senior is averaging 13 points, 1.4 assists and 1.7 turnovers, but has made only 37% of his shots. He has been solid from three (36%) and from the line (78%). Freshmen Christopher is expected to be a lottery pick and Bagley a first round selection this Summer. The 6’5” Christopher averages 14 points and is shooting 43% from the floor, 30% from three and 80% from the line. Draft analysts have said he has been hesitant to shoot from three and needs to improve his shot from beyond the arc. 6’8” Marcus Bagley averages just under 12 points and 6 boards. He has made 49% of his shots, 36% from three and 72% from the line.

In the absence of Bagley and Christopher, Hurley has relied more on 6’1” senior transfer Holland Woods and 6’9” sophomore Jalen Graham. Graham set career highs with 14 points and 11 rebounds against OSU. He is averaging 8.4 points and 4.8 boards and has made 62% of his shots and 47% from the line. He has not attempted a three. Woods averages 3.5 points and has a slash line of 35%/ 29%/ 81%.

Hurley had high hopes for this season in part because his top four players will not return next year. The Trojan size should cause big problems for ASU. To beat the Devils the Trojans need to keep them off the foul line and force them to take contested perimeter shots. In the first game between the two teams Martin didn’t play and the Trojans won 73-64.  Evan Mobley led USC with 19 points including 8-9 from the line, 13 rebounds and 6 blocks. Isaiah Mobley also had a double double with 13 points and 10 boards and Tahj Eaddy did not shoot effectively but scored 16 points, making making 8-9 free throws.

Before the season it was difficult to predict how good the Wildcats would be. Much like the Trojans, they had a major roster turnover. As the season has played out the Cats are 14-7 overall and 8-7 in PAC 12 play and in sixth place. They will likely return all of their key players next year. Arizona makes 45% of their shots, 38% from three and 72% from the line. They out rebound their opponents by an average of almost 8 per game. Arizona’s NET ranking is currently 46. It’s interesting that Oregon’s NET is 47 and UCLA 48. ASU ranks 33rd in offensive efficiency and 107th in defensive efficiency.

The Trojans beat the Cats 87-73 in January in Tucson for USC’s largest margin of victory in Tucson in almost 100 years, though the teams didn’t regularly play before the Cats joined the then PAC 10 in 1978. Isaiah White had a big game in the first meeting making 7-10 shots and finishing with 22 points and 5 rebounds. Evan was the only other Trojan in double figures with 19 points. USC made a very high 58% of their shots including 8-14 from three and made 17-23 free throws.

Freshman big man Azuolas Tubelis single handily kept the Cats in the game. He scored 31 points making 11-16 from the floor, 2-4 from three and 7-8 from the line. The only other Wildcat in double figures was freshman guard Benedict Mathurin who finished with 11 points. The Trojan defense did very well against everyone besides Tubelis, holding Arizona to 40% shooting and 4-16 from three.

Three other Cats are having good seasons. 6’5” junior Jemari Baker averages 12 points and shoots 49%/ 34%/ 83%. 6’1” sophomore Jordan Brown averages 11.7 ppg and 5 boards. He does not shoot from three but makes 57% of his shots and 58% from the line. 7’1” sophomore Christian Koloko averages 5.3 points and 5.1 boards. Koloko has not come along as quickly as the coaching staff had hoped. He is out of position on defense too often and picks up quick fouls. If he ever develops he has the body of a star.

Arizona is a good offensive team and their main players are very good from the line. Mathurin is also very good from three. He is bigger than most guards he faces but the Trojans can match his size with Isaiah White, Drew or Noah Baumann, though Mathurin is more athletic. The problems for Arizona have usually been on the defensive end.

The won- loss records of both Arizona and ASU are surprising. Both have the personnel to get hot in a game or a stretch of games. ASU lacks the size to match the Trojans and will need big games from their guards to win. It will be interesting to see how the Trojans defend Martin since USC doesn’t have anyone who can match his quickness. USC will want to close all driving lanes to Martin and force him to shoot outside where he is less effective. Christopher also struggles from the perimeter; he relies on athleticism more than quickness and is an effective mid range scorer. Verge is one the Devil player who can get hot from outside.

The Trojans and Devils are opposites of one another. It’s size against quickness; ASU’s ability to get to the line against the Trojans very good defense; the Trojan offense against a poor Devil defense.

The Arizona game is different. Akinjo is hot and cold on offense, similar to Isaac Bonton from Washington State. If the Trojans can force him to take a lot of shots to get his points as they did with Bonton that will go a long way to a victory. USC will need a different defensive plan against Tubelis than in their first meeting and will need to stop him from getting to his spots. The Cats are an average defensive team and the Trojans need to be patient for good shots.

On paper USC is better than both of these teams and are playing at home, which is an advantage though not as large an advantage as in most years. USC has been winning but has not blown out many teams or getting most of the roster to play well in many games. They need their defense to play well this week. I want to say the Trojans will win both games but I have a sense that a bump in the road is coming and it may be this week. I think it is more likely the Trojans split than sweep, but hope I’m wrong.