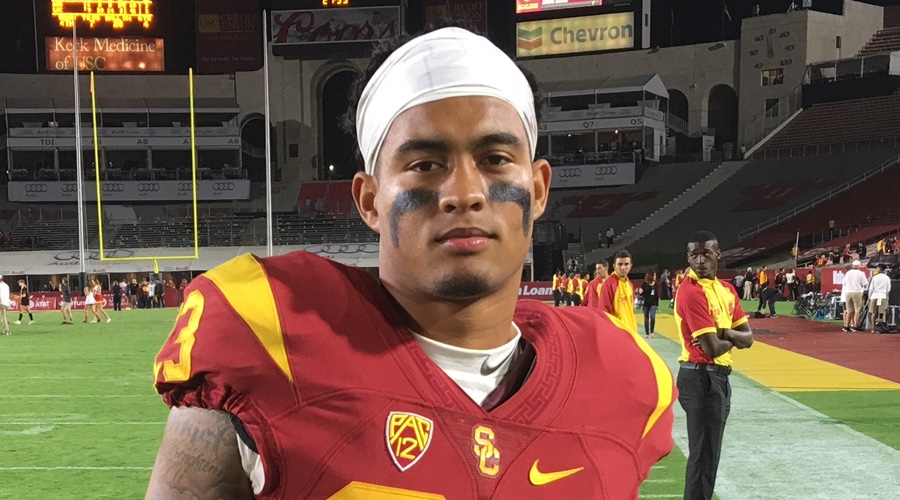 Trailing 3-0 early in their matchup with Arizona State last Saturday, the Trojans needed a spark, and that’s just what they got from a somewhat new name to emerge for Clay Helton’s team as of late – Jonathan Lockett.

The junior cornerback chose the perfect time to come up with the first interception of his career, snagging Sun Devils quarterback Manny Wilkins’ deep pass attempt with a tremendous diving effort along the sideline.

The play wound up serving as the turning point of the game, as the USC offense promptly drove the ball 95 yards down the field for a touchdown, and the Trojans never trailed again, ultimately defeating Arizona State in convincing fashion, 41-20.

“It was very exciting to get my first interception, and to make a play like that,” said Lockett, who stands 5-foot-11, 180 pounds. “I saw the motion, and I had watched film – I knew exactly what play it was. And I just turned around and made a big play for my team.”

While Lockett saw sporadic time for the Trojans in his first two years on campus, even earning two starts as a sophomore, the Santa Ana (Calif.) Mater Dei product was buried on the depth chart throughout fall camp and on into the early goings of this season.

With Defensive Coordinator Clancy Pendergast looking to mix things up following the Trojans’ loss to Stanford on Sept. 17, however, Lockett suddenly found himself thrust into the starting lineup at the nickelback position in the week leading up to USC’s matchup with Utah. It’s a role that he’s looked more than at home in ever since.

That was particularly the case against Arizona State, when Lockett not only came up with the momentum-changing interception, but a key pass break-up as well, and he also tied for the team-lead in tackles with five.

And while his performance might have stood out as one of the revelations of the Trojans victory to most casual observers, for Lockett, it’s what he envisioned all along.

“I expect that from myself, but I think I surprised a lot of people as far as coaches or other people watching because you barely see me out there – I’m always that next guy up,” Lockett said. “I knew I just had to be patient, and if I kept working, sometime I would be out there. That’s been my mindset.”

With a breakthrough showing now under his belt, coupled with the added reps that he’s received in practice as well as in games, Lockett says that his confidence is at an all-time high.

“You know, it’s all about experience,” Lockett said. “The more you’re out there on the field, the more comfortable you get, and I feel like I’m getting more comfortable, and I should be making more plays. When I first got in there the first couple of years, the game was fast. But now since I’m getting a lot of reps, the game is slowing down for me.”

For a Trojans defensive backfield that is looking to build upon what was an improved overall effort last weekend, Lockett’s growth and emergence couldn’t be happening at a better time – particularly with a Colorado team coming up this Saturday that currently ranks No. 9 in the FBS in total offense (531.2 yards per game), and that features an explosive passing attack that is headlined by star wide receivers Devin Ross and Shay Fields – both of whom Lockett has squared off against since their high school days, when Ross was at Mission Hills (Calif.) Bishop Alemany, and Fields was at Bellflower (Calif.) St. John Bosco.

“They like to go deep,” Lockett said of Colorado. “As a DB you love going up against a passing team. It gets boring when you play a team like Stanford that runs all of the time. We look forward to it.”

And after a long wait, not to mention a whole lot of work out on Brian Kennedy-Howard Jones Field, not only is Lockett looking forward to the challenge of going up against Colorado’s passing attack, but if his performance last weekend is any indication, he’s also more than ready for it.

“I’m very happy with my role now,” Lockett said. “Now that my opportunity is here, I just have to take advantage of it and do my job.”