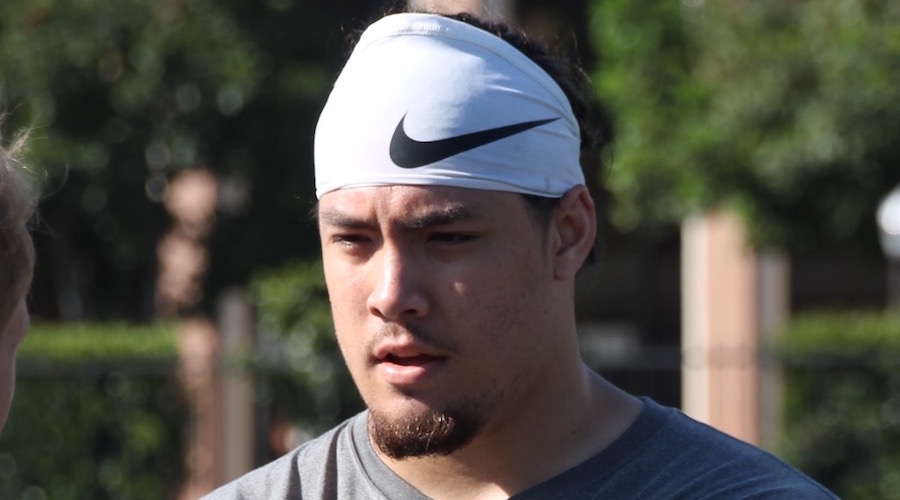 It’s been a long road, but junior center Toa Lobendahn is firmly back in the flow of things at USC this summer, looking more than ready to make his presence felt in a major way when the Trojans open up their season against Alabama on Sept. 3 in Arlington, Texas.

A sturdy performer for the Trojans with 20 starts under his belt – at four different positions – Lobendahn missed the last half of the 2015 season after tearing the ACL in his right knee during USC’s 42-24 victory over Utah on Oct. 24. Remaining limited throughout the spring, he’s now made his return to action this summer, taking part in the team conditioning workouts as well as the player-run practices, showing no sign of the injury that kept him sidelined for so long.

“All glory to God to just be healthy again after this long rehab process,” Lobendahn said. “I’m pretty much all the way there. I’d say the only thing that I’m not cleared for yet is contact. That will come when fall camp comes. I’m pretty sure it will be when we start out, they’ll say, ‘you’re good to go.’ But they’ll probably limit how many reps I get at first.”

This isn’t the first time that Lobendahn has had to fight back from serious injury. Tearing the ACL in the opposite knee as a sophomore in high school at Lakewood (Calif.), he was already well aware of what the rehab process entailed going in.

“I knew what to expect this time around,” said Lobendahn, who went on to transfer to La Habra (Calif.) prior to his senior season. “It wasn’t all new to me, and I knew what to do. And especially having the cast around me here with the strength staff and all of the physical therapy people, it definitely helped a lot.”

Currently sitting at his target-weight of 295 pounds, the 6-foot-3 Lobendahn has not only been putting in the extra time to make sure that he’s where he wants to be physically, but he’s also made a concerted effort to keep up-to-speed with the playbook, while also acclimating himself to a new position coach in Neil Callaway.

That process really began as soon as spring camp opened up, a time when Lobendahn could often times be found delivering snap-after-snap to the quarterbacks prior to each practice, as well as during some of the early non-contact periods.

“That was really good in the spring because they had us doing 7-on-7, and just the little things, really,” Lobendahn said. “Sitting through all of the meetings, being out there during all of the practices, and basically just taking part in everything except for the practice itself definitely helped me. I was able to develop a good relationship with Coach Callaway.”

Recently named to the watch-list for the Rimington Trophy, given annually to the top collegiate center, it is naturally assumed that when USC faces the Crimson Tide, Lobendahn will be back in the starting lineup at that spot, just as he was in his final two games of action in 2015 – after he had made the move from right guard.

For that to happen, however, Lobendahn must first fight off some serious competition in the form of Nico Falah. The redshirt-junior filled in with the No. 1 group at center throughout the spring, and he’s continued to take a majority of the reps with that unit in the player-run workouts this summer as Lobendahn has eased his way back.

Despite his prior accomplishments, it’s a battle that Lobendahn has anticipated all along.

“Coach Callaway will start me off with the ones just out of respect I guess, but it’s definitely going to be a fight,” Lobendahn said. “It’s always a fight for your job.”

Within the offensive line corps, that element of competition certainly isn’t unique to the center position. Not only because the unit has a new position coach in Callaway, giving a number of players a fresh start, but also because of the simple fact that the group is marked by greater depth in comparison to recent years past, with additional names like Zach Banner, Chad Wheeler, Viane Talamaivao, Damien Mama, Chris Brown and Chuma Edoga among others helping to form what many are predicting to be an extremely formidable group.

“I expect us to be the best in the nation,” Lobendahn said. “That’s what we’ve been working for all summer, since winter. I know there are a lot of people talking us up. I wish there wasn’t. I wish we could just go out there kind of unknown, but with the guys that we have, people are definitely going to know about us.”

In order for the unit to live up to expectations, however, Lobendahn knows that each and every member of the group will need to continue to remain focused on the task at hand this summer, putting in countless more hours of preparation. With a newfound lease on life, it’s a challenge that he’s most definitely up for.

“I don’t want to talk about it as much as I just want to go out there and prove it,” Lobendahn said. “I’m ready to go. I’m ready to get this year started. It’s going to be a special year. We have a lot of older seniors that I want to send out the right way. I’m very excited.”