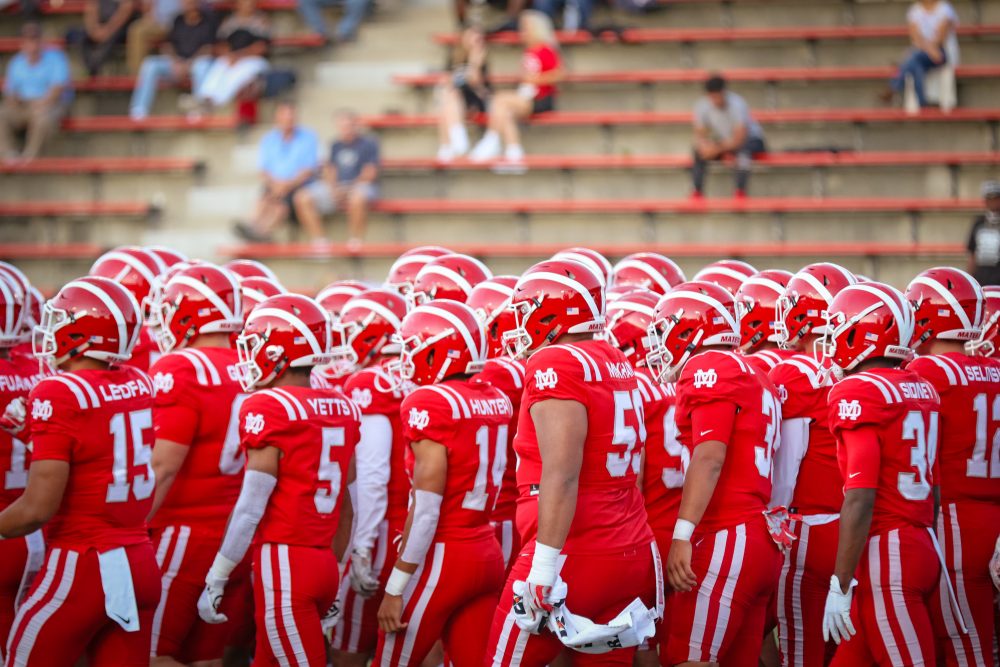 Mater Dei High School has been very good to the USC Trojans over the years, as plenty of former Monarchs have found their way onto the USC practice fields and into USC history. There are six former Mater Dei players on the USC roster this year, and former Trojan greats such as Matt Leinart, Matt Grootegoed, Matt Barkley and plenty of others still resonate as connections between the two programs.

But Mater Dei players heading to USC hasn’t been anything close to the sure thing they have been in the past. The Trojans did extremely well to land JT Daniels, Amon-Ra St. Brown and Solomon Tuliaupupu, then follow that up with wide receiver Bru McCoy in 2019. But five-star quarterback Bryce Young decommitted from USC eventually made his way to Alabama in the 2020 class. Offensive lineman Myles Murao signed with Washington. Cornerback Elias Ricks, who left Mater Dei for IMG Academy, signed with LSU. Linebacker Mase Funa signed with Oregon.

But Mater Dei continues to pump out extremely talented players. The 2021 class has USC targets in linebacker Raesjon Davis (an LSU commit), cornerback Jaylin Davies and wide receiver Cristian Dixon. The 2022 class has wide receiver CJ Williams, defensive back Domani Jackson, linebacker David Bailey and running back Raleek Brown. And it might be time for USC recruiting fans to get to know 2023 prospect Leviticus Su’a.

The 6-foot-1, 210-pound linebacker has an opportunity to make a name for himself as part of a very talented defense this fall, as the sophomore looks to build on a promising freshman campaign, where he recorded seven tackles, a forced fumble and an interception in five games.

Su’a already holds offers from Oregon and Washington and it wouldn’t be surprising to see one come from USC if he gets off to a hot start this season.

Su’a originally got into football following in the steps of his older brother, Kain Su’a, who played at Rancho Verde High School and is now playing at Cal Poly SLO. The linebacker knew he wanted to play for Mater Dei head coach Bruce Rollinson, and enjoyed his first year playing for a loaded program.

Su’a said he was able to learn the ropes at Mater Dei under Funa, and took in as much as he could from last year’s two inside linebackers, Ray Leutele and Dean Neeley. Going up against standouts on the other side of the ball has accelerated his development as well.

“It helps me to push myself,” Su’a said. “We can all just get better today. My first practice, I went one-on-one with Myles Murao.”

Su’a has a nose for the ball and already shows a real ability to fight through traffic as an inside linebacker in the run game. As for a future position, Su’a said he likes playing in the middle, but is willing to wait and see how his body develops over the next several years, as he’s open to the possibility of moving to outside linebacker. No matter what position he winds up at, he’ll be a wanted recruit over the next few years.

Oregon offered back in late January, after a visit to Mater Dei by head coach Mario Cristobal and then-Oregon defensive backs coach (now USC cornerbacks coach) Donte Williams. Su’a said after the visit to Mater Dei, he got a text from his coach saying Oregon had extended the offer.

“I was speechless,” Su’a said. “I didn’t know how to react. The first thing I did was call my parents and let them know what happened.”

And the family’s reaction to the first college scholarship offer?

The Oregon offer was followed by one from Washington when Su’a visited the Seattle campus in early March. More will come during the coming months and years, but it’s clear that if one does eventually come from USC, it will mean quite a lot.

“It’s always been USC since I was younger,” Su’a said. “It was always my dream school. I would love to go there.”

With the previous contact with Williams and the fact that he plays at Mater Dei, it’s safe to say Su’a is firmly on the Trojans’ radar. As with all young players, this offseason will be an important one for him in his growth and development, as coaches hope players are taking it upon themselves to work during this time when players are on their own to make offseason gains. Su’a said he’s working on lifting weights, getting faster, stronger and smarter as he moved into his second year of high school.

And this might be when Su’a stands out the most, as few players will outwork him. As for what he feels is his biggest strength as a player, he was quick with an answer.

“My mindset,” he said. “I feel like that makes me different from the rest. My dad always taught me to outwork everybody on and off the field.”