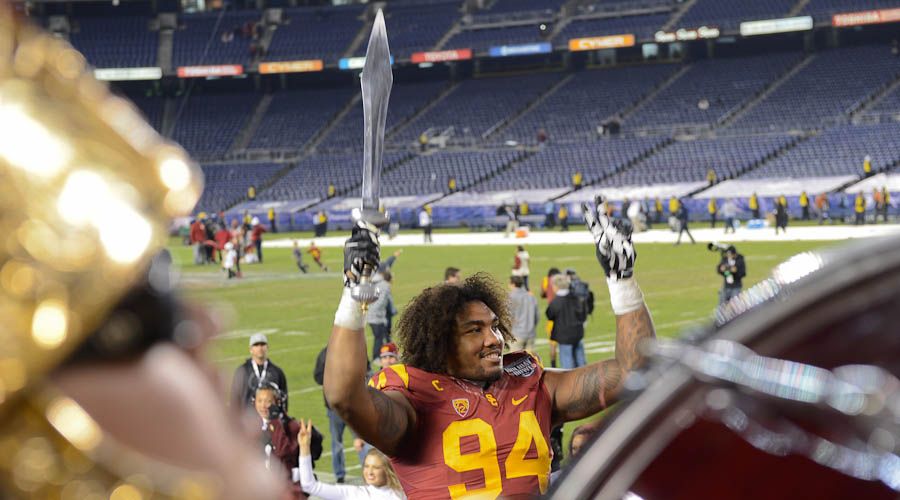 With the announcement today by Leonard Williams that he will be leaving USC early to move on to the NFL, the career of one of the most productive defensive linemen the Trojans have ever seen has come to an end.

“This was a very hard decision for me,” Williams said in a statement released by the school. “I love USC, Coach Sark and the coaching staff, my teammates and the fans, and I love the game of college football. It’s hard to leave all of that. I know life is never the same once you leave college.

“But I feel like it’s the right time for me to go. I feel like I’m ready. I’m looking forward to the new challenge that the NFL presents.”

The news, of course, is no surprise to anyone who follows USC football, or college football in general. You can’t read a mock NFL draft these days without seeing his name projected as one of the top picks in the draft, and that is some pretty rare air when it comes to the financial realities of a first job out of college.

The physical skills are obvious, a 6-foot-5, 300 pound frame to go along with agility and quickness that earn the moniker of Big Cat in his time at USC. He can play multiple spots along the defensive line, he has played through injuries and he has been praised throughout his career by coaches for his work ethic and passion for the game. For all his success on the field, Williams retained the youthful joy of a college student, one who was comfortable skateboarding across campus, a very recognizable figure with his long flowing hair and big smile.

Williams was a two-time All-American at defensive end for the Trojans, a 2014 team captain and Most Valuable Player, along with being the Defensive MVP for the Holiday Bowl win over Nebraska. Williams had 80 tackles in 2014 (second on USC), including 9.5 for losses with a team-high 7 sacks.  He also had a team-high 3 forced fumbles this year, plus he had an interception, a fumble recovery and 3 pass deflections.  In his 3-year career, he 218 tackles, including 36.5 for losses with 21 sacks.