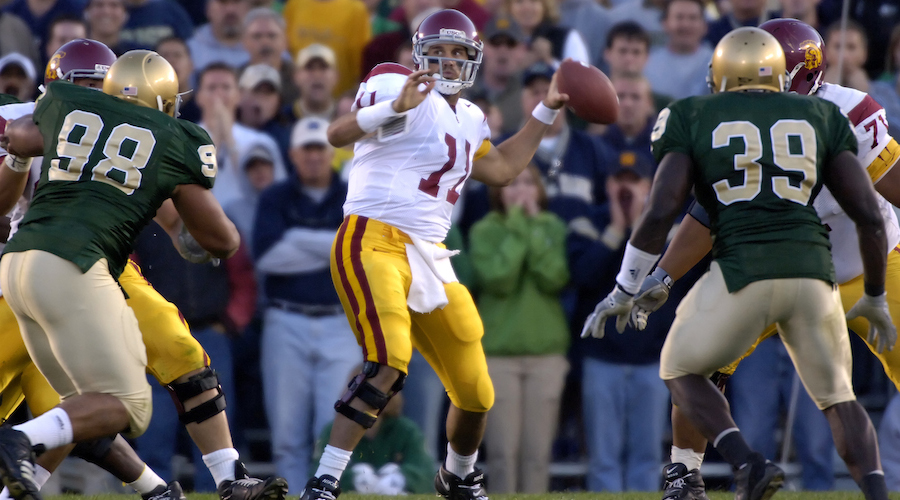 That was a no-brainer.

The College Football Hall of Fame announced their Class of 2017 today and USC quarterback Matt Leinart was named as one of the 13 new members.

It’s difficult to imagine a better resume than the one Leinart can put forth as a 3-time All-American, Heisman Trophy winner, a 37-2 record as a starter and a pair of national championships. He completed 64.8% of his passes for 10,693 yards and 99 touchdowns during his 3 seasons (2003-05) as USC’s starting quarterback. USC won the 2003 and 2004 national titles and played for the crown in 2005.  He was MVP of the 2004 Rose Bowl and 2005 Orange Bowl as the Trojans defeated Michigan and Oklahoma, respectively.

Leinart also had a pair of signature moments in Trojan football lore when the Trojans beat Notre Dame in 2005, with “4th & 9” and “The Bush Push” being phrases that are familiar to any USC fan.

Leinart was a first-round draft choice of the Arizona Cardinals in the NFL, and played his high school ball at Mater Dei.

He is the 43rd inductee with USC ties, including 32 players, in the College Football Hall of Fame.  A Trojan has been elected into the Hall in 12 of the past 18 years.

Leinart will be inducted at a Dec. 5 dinner in New York City.

A 2-time USC captain and 3-time All-Pac-10 first teamer, he was the Pac-10 Offensive Player of the Year in 2003 and 2004, winning the Archie Griffin Award both seasons.  In 2004, he also won the Walter Camp Player of the Year Award, AP Player of the Year and Manning Award, while in 2005 he won the Unitas Golden Arm Award and Pop Warner Award.  He twice was a finalist for the Sullivan Award.

In his career, he set 16 USC records, 11 Pac-10 records (including career completion percentage and TD passes) and 2 NCAA marks.

He now is a college football studio analyst with FOX Sports.  He also established the Matt Leinart Foundation to create athletic opportunities for underprivileged youth.