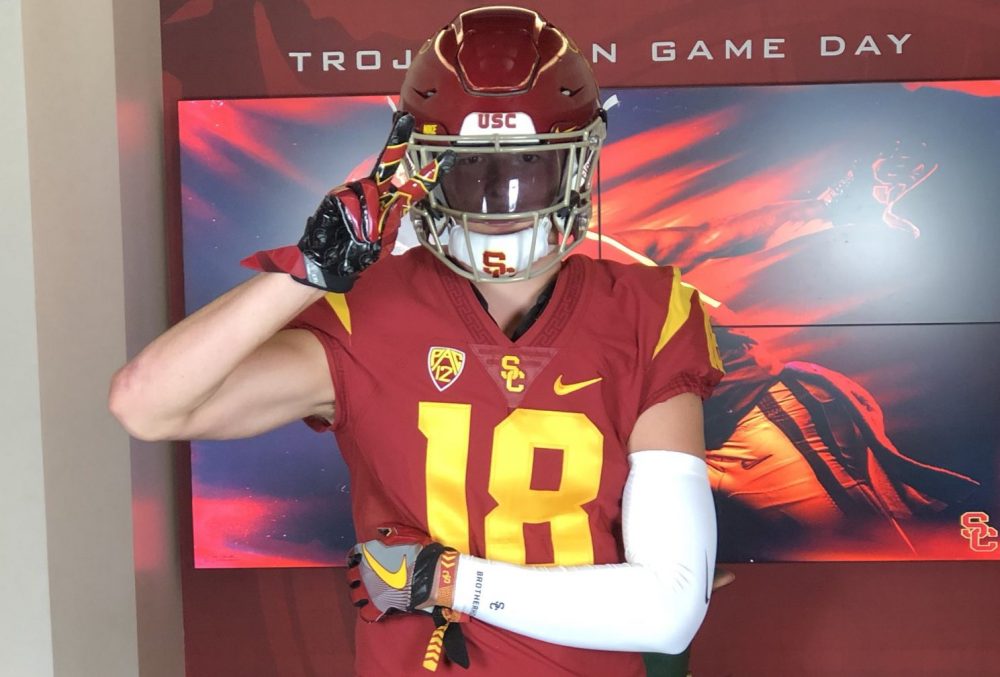 During last week’s season-opening game, tight end Lake McRee (Austin, Tex./Lake Travis) sat down on the bench after the first drive of the game and called it the weirdest feeling in the world. It was something he’d done countless times before, but never quite under those circumstances. It was the first time he’d done it in more than a year, as it followed his first playing time since tearing his ACL prior to his junior season.

The injury occurred last year, during the second day of fall camp. McRee said it was on one of the final plays of practice, as he caught an out route and felt a pop when a cleat got caught. An MRI later that day revealed the tear.

“I was pretty bummed out,” McRee said, before quickly shifting to his current situation. “It was a long, hard road to get where I’m at now. I worked really hard to get to this point and I’ve earned everything.”

Recovering from an ACL injury like that can be a frustrating process. McRee said he had to wait a month for the swelling to go down before he could undergo surgery. During that time, he said he didn’t feel any pain whatsoever. Then, following the surgery, McRee said it was like “restarting from below Square One.”

He said he moved from three weeks in bed, to slowly riding a bike, to progressing to a light jog. Ultimately, it’s a 9-12 month process.

“It doesn’t feel like it goes by very fast,” McRee said.

The 6-foot-4, 215-pound tight end said he finally started to feel back to normal at the beginning of the quarantine back in the spring. He would go to the local field with his dad and catch balls from the JUGS machine and there was one very particular moment when McRee realized he was all the way back.

“There was always one route where I could tell I was favoring my right leg–the leg that wasn’t injured,” he said. “It was a curl route, where I would have to plant on my left leg and put all my body weight on it. I did it once and it felt perfect. I thought, ‘Alright, I think I’m back to how I was.’ It was a good feeling.”

McRee has been eager to get back onto the field, and a delay that he first saw as a positive in that it would allow him more time to recover quickly turned into a frustration that he couldn’t get out and prove he was fully back. He was held back a bit during Lake Travis’ opening scrimmage two weeks ago, but tossed in from the beginning for the first game of the season. His first catch came on the second drive of the game, when he turned a short out route into an 11-yard gain.

“It felt like just another throw and catch,” he said.

Lake Travis has a new offensive coordinator this season, but McRee will be used in the same roles he was as a sophomore–when he put together film that had USC coaches taking notice of him. He’s asked to line up in a number of positions–as an H-back, lined up tight to the offensive line and split out wide as a receiver against a cornerback. The ability to do all those things as a tight end makes him a great fit in the USC offense.

“That was a big reason why coach [Graham] Harrell really wanted me,” McRee said. “He said I fit perfectly in that offense because I can do everything you can ask a tight end to do.”

The USC coaches had a chance to see McRee up close at their camp in the summer following his sophomore season. He said he tries to model his game after some of the NFL’s best, including the 49ers’ George Kittle, the Chiefs’ Travis Kelce and the Raiders’ Darren Waller. McRee said the injury didn’t affect USC’s pursuit of him in the slightest, and he announced his commitment to the Trojans in early June of this year.

“They saw what type of players I was at the camp,” he said. “They treated it like a minor setback. It wasn’t an issue for them and I felt like they weren’t hesitating.”

“They showed me his film and said that’s how they were aiming to use me,” McRee said of London. “They broke down the film and I saw how much he was used. It was definitely pretty cool to see.”

USC could be in need of tight ends when McRee arrives on campus. Due to an NCAA ruling that does not count this fall as a season of eligibility, senior tight ends Josh Falo and Erik Krommenhoek would potentially have the ability to return for 2021. But if they don’t, USC would be down to just Jude Wolfe and Ethan Rae at the position, as Trojans’ 2020 signee Jack Yary decided to enroll instead at Washington.

McRee said he thought the Trojans could be pursuing a second tight end in this class but hasn’t put a lot of thought it whether or how that might affect him.

USC is considered the leader to land four-star prospect Michael Trigg (Tampa, Fla./Carrollwood Day) when he announces his decision this Sunday.

As for his future plans, McRee said he is taking the requisite classes in order to enroll early, but is holding onto that as an option rather than a firm plan of something he will do. He’s also still unsure whether he will sign during the early signing period in mid-December or wait until the traditional signing period in early February. McRee said he’s keeping all those options open.

While he’s happy to be back on the field, performing and contributing, McRee did say that he used the time off to better himself as a football player as well.

“Overall, I think I’ve become smarter in the game,” he said. “With the injury and not being on the field, I tried to pursue watching tape and watching guys I want to model playing tight end after. Film-wise I became smarter, and I think that will help me a lot.”