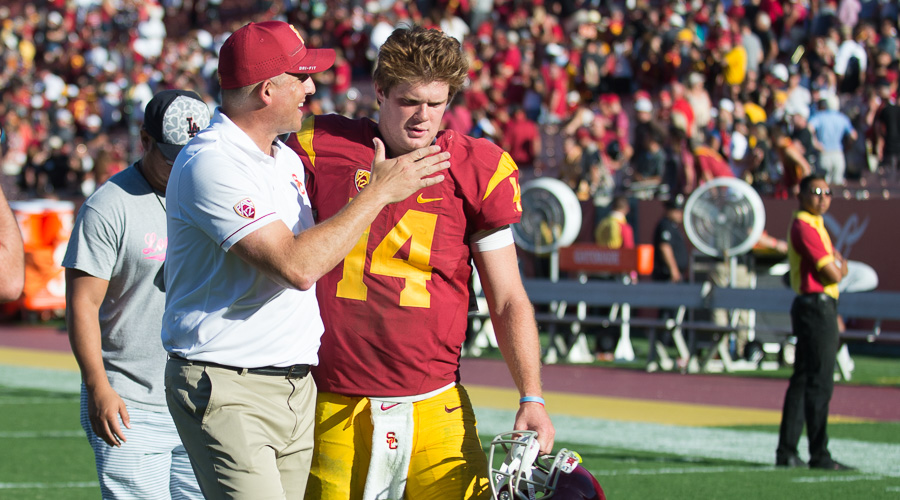 It’s no surprise that there will be points put on the board when these two teams get together (the Ducks have averaged 49 points per game the last 5 times they’ve met) but the surprise is the struggles that both teams have faced this year. USC started the season 1-3 before turning things around with four straight wins in the month of October, while Oregon had a five-game losing streak end last week with their victory over Arizona State and is in danger of not being bowl eligible. After 10 straight USC vs Oregon games in which both teams were ranked, neither team is ranked in the national polls for this meeting.

But that doesn’t mean there isn’t optimism for both teams moving forward, and a lot of it is based upon the play of a pair of newly installed freshmen starters at quarterback.

For the second straight year Oregon tried to go the graduate transfer route at quarterback but Dakota Prukop wasn’t able to capture the same success that Vernon Adams saw in 2015. Oregon coach Mark Helfrich made the decision to go with true freshman Justin Herbert three games ago and the results have been promising for Duck fans. Herbert, who grew up near the Oregon campus, is the first true freshman QB to start at the school since 1983 and he’s thrown 12 touchdowns to only two interceptions. His six touchdown passes against Cal tied a school record, and the Oregon offense has averaged 41 points per game in his three starts.

With this being Oregon you know there are explosive skill players surrounding the quarterback. Royce Freeman is a returning All-Pac-12 running back who is 2nd on the school career rushing list, and he is sharing time with Tony Brooks-James, who is averaging over 8 yards per carry. Both backs have rushed for 8 TD’s this year. At receiver there is speedy Charles Nelson (who is the all-time kickoff return leader at the school) and established veteran Darren Carrington.

A big key could be the play of the Oregon offensive line, which starts four redshirt freshmen and will be going against a Clancy Pendergast-defense that has been playing well lately with improved communication and will be looking to rattle Herbert as much as possible.

The Trojan offense, on the other hand, will be facing an Oregon defense that is currently ranked #127 in the nation (2nd from last) in total defense, and in the last month we’ve seen Sam Darnold and the USC offense put up some pretty solid numbers against lower-ranked defenses such as ASU (#125), Cal (#123) and Arizona (#108).

The Trojans have gone over the 500-yard mark in each of the last four games, and Darnold has thrown 16 touchdowns against only four interceptions in that stretch. Darnold, who has thrown five touchdowns in each of the past two games, has the #2 QBR in the nation this year.

It remains to be seen if USC will have the services of senior tailback Justin Davis, who is still out with a high ankle sprain, but the sophomore duo of Ronald Jones and Aca’Cedric Ware filled in nicely last week while combining for 353 rushing yards in the win over Cal. A lot of credit for the ground game goes to the improving offensive line that has been performing well in recent weeks.

This Homecoming match-up for the Trojans represents the start of a month where much will be revealed about the direction of the program under Clay Helton. September was rocky against an admittedly tough schedule, things got easier in October and the wins came, and now there are four opponents that will each offer a unique test in their own way.

The Ducks may be down this year by their recent standards but it’s no secret the type of rivalry that has been built between the two schools. Some of the biggest scores and yardage totals we’ve seen from USC opponents have come at the hands of the Ducks in their recent run but something feels different about this year’s version of Oregon, so much so that there is a lot of speculation about the future of Helfrich. It was only two seasons ago that Helfrich had his team in the national title game but things have not gone as well since and expectations have changed in Eugene.

USC coach Clay Helton knows a lot about expectations, and about the kind of pressure that can come when those expectations aren’t being met. The noise was loud when the Trojans were sitting at 1-3 and Helton made a move at quarterback that has paid off about as well as he could have imagined, and Helfrich is hoping for similar results with his recent QB switch. Both signal-callers should get plenty of opportunities to shine when the teams meet on Saturday.