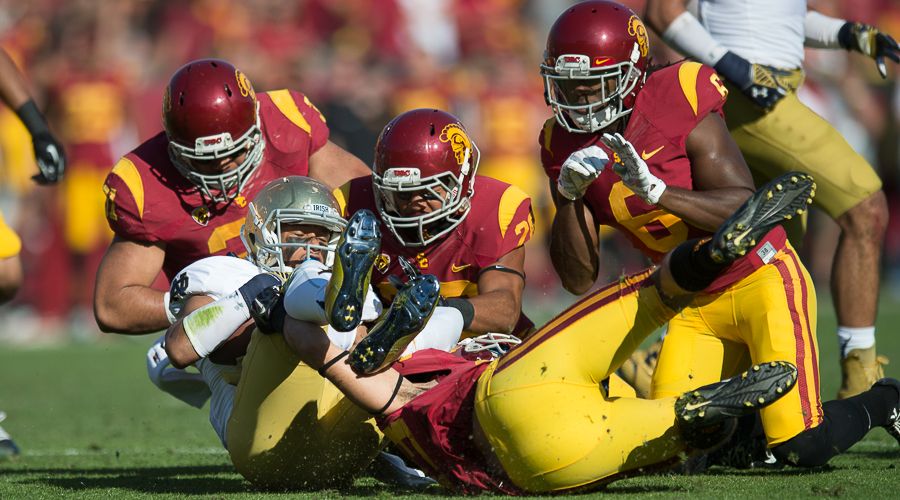 There are a lot of smiles around USC football these days as the Trojans are coming off a big victory over their crosstown rival and are in the midst of a 7-game win streak. There is even talk of playing in the Pac-12 championship game although the Trojans will need a little help for that to happen.

What will definitely happen next Saturday at the Coliseum is that the Notre Dame Fighting Irish are coming to town, and for the second week in a row the Trojans will face a rival that is struggling to finish out a bowl-less season.

It’s a rare year for USC to see the fortunes of their rivals turn in such drastic fashion (each are sitting at four victories as the regular season comes to a close) and the fact that the Trojans are playing such good football makes it a stark contrast to the early-season narrative when USC was struggling. There was a time when this final two-game stretch was considered daunting for a team with the hardest-schedule in the nation but the Trojans have already dispatched the Bruins while the Irish come in surrounded by a lot of turmoil.

Brian Kelly is in his 7th season as head coach of Notre Dame and there are no guarantees he will be around for an 8th. The issues surrounding the program this season have involved everything from coordinator firings to poor in-game management, a lack of depth and reliance on too many freshmen (14 true freshmen have played). It’s resulted in the Irish losing 7 games this season, all by 8 points or less. And in 6 of those 7 losses they have held leads in the game.

DeShone Kizer has emerged after an early season quarterback battle and he’s 16th in nation with 24 touchdown passes. He also has 7 touchdowns running the ball. The Trojans know he can be effective, he led Notre Dame to a 41-31 victory over USC last year, but he was also sacked four times in that game so the Trojans know they can get to him too.

The top targets for Kizer include Equanimeous St. Brown from Servite (51 catches, 867 yards, 8 TD) and Torii Hunter, while the leading rusher is Josh Adams (753 yards).

On defense, the Irish are vulnerable to the pass (last year USC set a Notre Dame opponent record with 440 passing yards) and the top tacklers are LB’s Nyles Morgan (87) and James Onwualu (70).

One of the key areas to watch in this game will be the trenches, as the Trojans have been getting strong play on both sides of the line in recent weeks while the Irish have been unable to establish a physical presence. That could be a critical difference to the last time these two teams met in Clay Helton’s first game as interim head coach of the Trojans when USC was unable to match the Notre Dame physical play and gave up 17 unanswered points in the fourth quarter.

It was great to see the Trojans steadily impose their will last week on the Bruins to finish off that win and it would be a strong statement for the state of the program to do it again this week against the Irish.