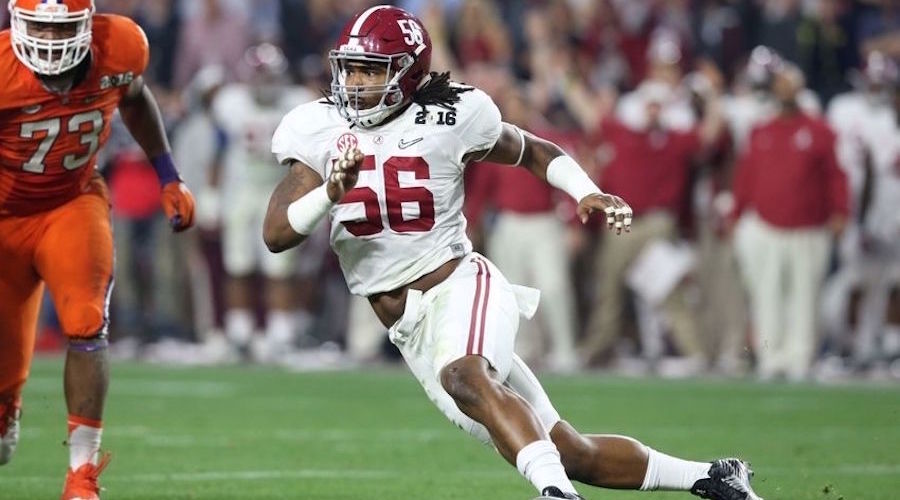 When the USC Trojans look across the field at the Alabama Crimson Tide on Saturday at AT&T Stadium they will see one of the few schools that can match them atop the college football pecking order, a status that is earned with national championships (27 combined), long periods of dominance (68 combined bowl victories), and a history of elite players (a combined 282 first team All-Americans).

The two teams have met seven times with Alabama winning five times, and USC winning twice. The two Trojan wins were memorable ones, in 1970 with the game that many credit Sam Cunningham’s performance with helping to integrate southern football, and 1978 when the teams tied for the national championship despite the fact that USC had won the head-to-head meeting earlier in the year.

When USC has the ball

Max Browne makes his first start at quarterback for the Trojans and one of the biggest keys for him is going to be remaining upright against a fierce Alabama pass rush. The Tide feature a slew of athletes who can get pressure, including DE #93 Jonathan Allen (who led the team in sacks last year) and OLB #56 Tim Williams (2nd on team in sacks and is very fast off the edge). Alabama lost a lot of talent from last year’s defense but they rotated 10 players along the front so there is plenty of experience coming back, other players to watch include NT #94 Da’Ron Payne (made a big impact last year as a frosh) and wide-body #54 DE Dalvin Tomlinson.

It will be a test for a Trojan offensive line that was supposed to be a strength with every starter returning but the line will take a hit if Chad Wheeler, entering his fourth year as a starter at LT, is unable to play (or be effective if he does play) as he is dealing with plantar fasciitis. Right now it looks like Chuma Edoga will start at LT, with Zach Banner staying at RT. Either way, the line will need to maintain a physical presence to establish a run game for the Trojans with Justin Davis and Ronald Jones. Alabama will counter with a run defense led by leading returning tackler #10 Reuben Foster at inside linebacker.

The passing game should offer some terrific battles as the Trojans are deep at receiver and tight end while Alabama counters with some elite talent starting in the secondary. The thought of JuJu Smith-Schuster lining up against #26 Marlon Humphrey is as good as it gets. #29 Minkah Fitzpatrick is the starting corner opposite Humphrey and he is a good one too, while safety #4 Eddie Jackson is the returning leader in interceptions on the team (six picks, two returned for scores) and was the defensive MVP of the national title game. One area to watch is the possibility that the Alabama defensive backfield could have depth issues due to transfers and a suspension.

When Alabama has the ball

Like the Trojans, the Tide also had a quarterback competition extend into fall camp but the major difference is the fact that Alabama’s situation still isn’t cleared up yet. Saban has said it is down to fourth-year junior #18 Cooper Bateman and redshirt freshman #8 Blake Barnett, and USC fans know from experience that Tide OC Lane Kiffin can go into a season using multiple guys. Bateman has started a game and has a good knowledge of the offense while Barnett offers a lot of dual-threat skills to go with the stronger arm.

But while the QB situation has earned most of the headlines, the lack of a proven running back is also big news. Alabama saw Heisman winner Derrick Henry leave for the NFL, along with his record setting carries and yardage, plus his primary back-up Kenyan Drake is gone as well. As is typical for Alabama they have reloaded with some good, if inexperienced options. #9 Bo Scarborough is another big 240 pound back who runs with a physical style and #34 Damien Harris appears ready for more in his second year. There are also impressive first-year players #21 B.J. Emmons and #25 Joshua Jacobs who could be in the mix. They will be running behind an Alabama offensive line that features one of the best offensive tackles in the nation in #74 Cam Robinson, but there are some other moving pieces along the line, along with a new position coach. It will be notable to watch if the Bama running game will be able to control the line of scrimmage against a USC front seven that has been bolstered by some key additions such as Stevie Tu’ikolovatu and the injury return of Cameron Smith.

The match-ups between the Alabama pass catchers and the Trojan secondary should be just as exciting as the USC receivers vs the Bama defensive backs. Helton has said #3 Calvin Ridley is very similar to Marqise Lee, who won a Biletnikoff Award under Kiffin, while #1 Robert Foster was scheduled to be the No. 1 receiver last year before a shoulder injury. #13 ArDarius Stewart is another good one, and Bowling Green transfer #11 Gehrig Dieter has shown terrific hands. And then there is tight end #88 O.J. Howard, who was the national championship game offensive MVP last year while catching passes for over 200 yards. The Trojans counter with a pair of very athletic corners in Adoree’ Jackson and Iman Marshall, plus a deep safety group that will need to step up in this game.

Junior punter #15 JK Scott is considered one of the best in the nation for the Tide, and he will be kicking to Adoree’ Jackson. The Tide also have a senior placekicker in #99 Adam Griffith.

Click here to listen to a podcast with Ryan Fowler of 102.9 Tide radio to break down the Alabama team