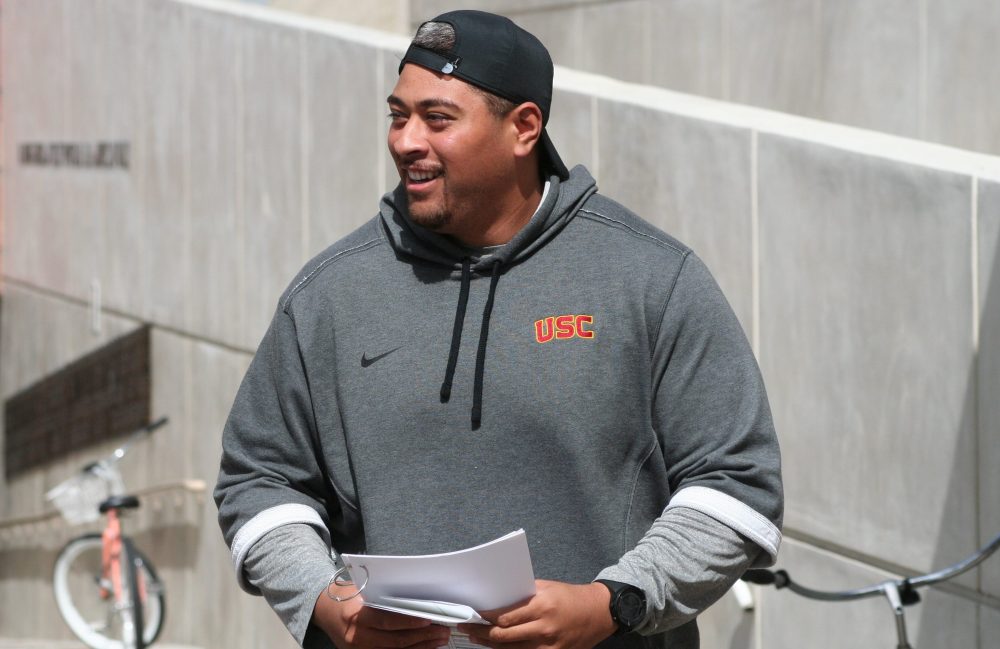 USC coaches have put together a terrific 2021 recruiting class, but there is still room for a few marquee prospects to add to it. One opportunity to do so will come tomorrow evening, as four-star offensive tackle Kingsley Suamataia (Orem, Utah/Orem) announced that he will make his commitment Tuesday evening at 6:30 PT.

Suamataia is the nation’s No. 59 overall prospect and No. 10 offensive tackle. Oregon held a massive lead in his recruitment throughout the process, but USC has gotten itself into the mix, thanks to offensive line coach Tim Drevno and graduate assistant Viane Talamaivao (lead photo).

Suamataia has a familial connection with Oregon offensive tackle Penei Sewell and Ducks linebacker Noah Sewell. The older Sewell announced Monday that he would opt out of the 2020 season and declared for the 2021 NFL Draft, seemingly leaving a vacant spot at left tackle for the Ducks and a path to early playing time for Suamataia.

Suamataia checks in at 6-foot-5, 280 pounds and while his size alone doesn’t make him overwhelming matchup for defensive linemen, his athleticism and speed off the ball makes him a dominant offensive tackle. He’s a do-it-all tackle, skilled in both the run game and pass game, and has traits that would seem to easily transition to the next level. He looks to be one of the few sure-thing offensive linemen in the West region in this 2021 class.

After two years where USC recruiting the offensive line very lightly, the Trojans responded by signing six offensive linemen in the 2020 recruiting class and have three commitments in this one. And while the numbers look better in these two classes, just two of those nine linemen are regarded as four-star prospects. Suamataia would be a major addition to this class, both as a player a position where USC needs to continue stockpiling bodies, as well as one of the elite regional prospects.

In recent classes, USC has not come out winners often in head-to-head recruiting battles against Oregon. Sewell was a big one back in the 2018 class. In 2019, Oregon came into Southern California and grabbed five-star defensive end Kayvon Thibodeaux. In 2020, the Ducks repeated the feat with five-star linebacker Justin Flowe.

In this 2021 class, Oregon holds commitments from wide receiver Troy Franklin, offensive linemen Bram Walden and Jonah Miller, defensive tackle Keanu Williams and tight end Terrence Ferguson. All of them were USC targets. The Ducks haven’t beaten out the Trojans for every prospect the two schools target, but Oregon has gotten more than its share when it comes to going up against USC for prospects in the West region.