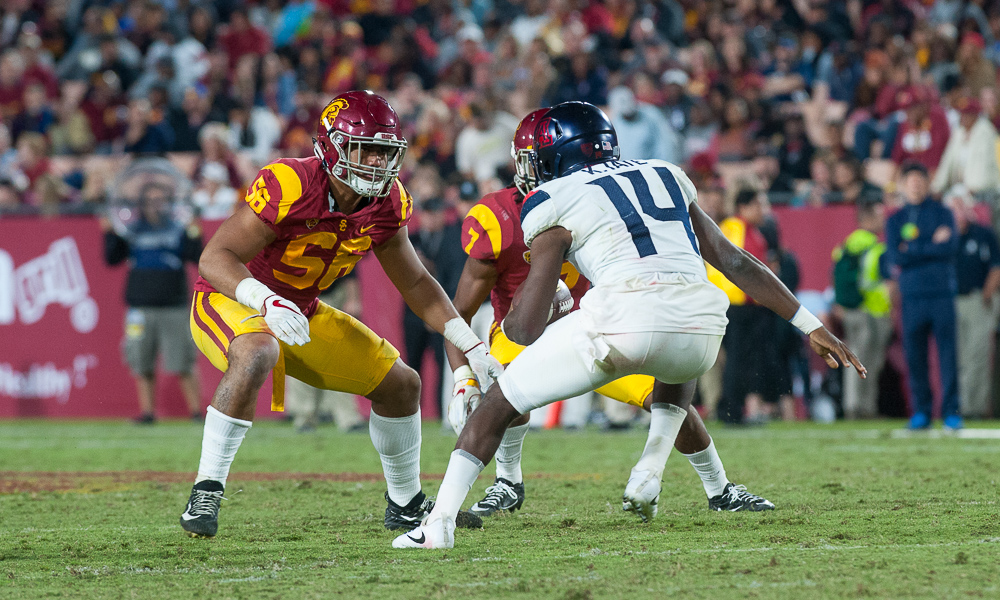 1. How will the quarterback competition go?

There are several questions about this competition, including whether or not Clay Helton will even name a starter at the end of spring. The situation is not a normal one as there will be two quarterbacks competing in spring with sophomore Matt Fink and freshman Jack Sears but there will also be the addition of a reclassified JT Daniels in the fall. It stands to reason JT didn’t bypass his senior year with plans to redshirt so that would mean he’s been lead to believe the job will be open entering fall camp. That scenario could also make sense for a pair of talented but inexperienced quarterbacks like Fink and Sears who will be working with a new QB coach in Bryan Ellis. Rather than worry about a pending starter announcement at the end of spring, they can take their time and make the announcement in fall.

2. Status of the injured players

One of the best parts of spring is always the chance to see some players that haven’t been on the field for a while due to injury. Porter Gustin certainly qualifies as someone who has been out but with the nature of his injury and veteran status it’s possible we will not see him again until the fall. Marlon Tuipulotu sat out the majority of the season with his bad back, it would be nice to see him in spring but like Gustin the coaches may be cautious with his injury and wait until a fall return. My guess is we will see plenty of Tayler Katoa as he returns from his knee injury, and at corner I’m anxious to see where Greg Johnson, Jonathan Lockett and Jay Godfrey might fit, along with Isaiah Pola-Mao at safety. Randal Grimes at receiver should be healthy and it wouldn’t surprise me to see him make a big move for more playing time. I know we saw Daniel Imatorbhebhe at the end of last season but that wasn’t the vintage Daniel we had seen before, hopefully his “odd” injury, as Helton described it, is a thing of the past come spring. Along the line I want to see where Nathan Smith might fit as a reserve at right tackle.

Last year Uchenna emerged as a true playmaker on the edge for the Trojans, and it will be very interesting to see how that role is filled in spring. The back-up to Uchenna last season was Oluwole Betiku so you figure he will get a legit opportunity to see where he’s at in terms of possibly grabbing the spot. With Gustin coming back at one OLB spot, Jordan Iosefa (photo above) could be moved over to compete with Betiku and I think that idea makes a lot of sense. Jordan showed a lot after he was moved to the edge, while Wole has yet to prove he is ready to be the guy yet. We could also see Juliano Falaniko and Kana’i Mauga getting some reps.

4. How will the offensive line come together?

This was a big question last spring too, and while the line performed well enough to have a 4,000-yard passer and 1,500-yard rusher, this is still an area to be developed if the Trojans are to get back to the physical foundation that has been a trademark of the program for so many years. Neil Callaway will return as the coach after a lot of speculation if he would be back, Toa Lobendahn will move from left tackle to his more natural position of center, and a pair of promising true freshmen from last year will be counted on for key roles (Austin Jackson at left tackle, Andrew Vorhees at right guard). If there is to be an increased focus on that power mindset, however, it needs to start at the top with Clay Helton and Tee Martin.

5. Can corners take next step?

It will be a veteran starting group at the corner spot with a pair of seniors (Ajene, Biggie) and a junior (Jackie) in the starting roles. Last season saw mixed results as the group could perform well at times but there were also breakdowns, and it would go a long way for the defense to see that area improve. There are plenty of reserve options to help with the passing offenses of the Pac-12, including Isaiah Langley but Ykili Ross is unknown with his status due to academic, Jamel Cook has yet to prove himself (and there are rumors of a potential transfer), Johnson, Godfrey and Lockett are all coming back from injury, and you have an early enrollee freshman in Chase Williams.

6. Which early enrollees can make an early impact?

I would put Caleb Tremblay as the most likely option, he’s a physically mature junior college transfer who plays a position where Rasheem Green left early for the NFL and there is a need. We could see Christian Rector get some reps, and Jay Tufele is a promising redshirt freshman, but Tremblay should be able to fit in there somewhere . Of the freshmen, I would say Talanoa Hufanga. The safety spot has a lot of bodies but only Marvell Tell has really established himself, the others will start jockeying for position in spring.