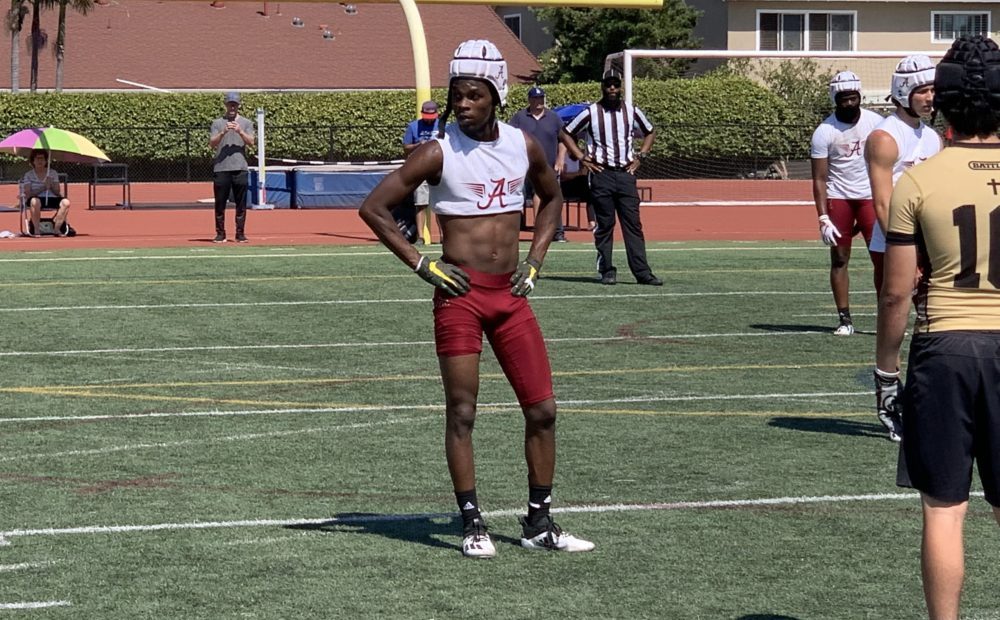 All the signs pointed toward Kevin Green becoming a USC Trojan, and now the 2022 wide receiver finds himself in the USC recruiting class simply by following them.

Green picked up an offer from USC all the way back in February of 2020, but the recruitment didn’t really pick up until the beginning of this year. For Green, a four-star receiver who can play three ways in high school, the elevated recruitment from USC meant a lot.

“They actually came at the right time,” Green said of the Trojans. “It was a low point for me during quarantine. I really stopped talking to other coaches. I had a few coaches recruiting me as a DB and I told them I want to play receiver and they backed up off of me. Then all of a sudden, ‘SC just came up and they started pushing for me real hard, showed me they wanted me.”

Green said his entire dad’s side of the family is full of USC fans and he’s been a Trojan fan his whole life.

Green said one of those came in the form of a sweater. Specifically, a USC sweater that was the last thing his aunt bought for him before she passed.

“I let schools veer their way out and ‘SC was there,” he said.

And the USC coaches are likely very happy to have him in this class. The 5-foot-11, 165-pound Green is truly dynamic with the ball in his hands. He runs precise routes and is quick, fast and physical before, during and after the catch. In his last full season of football, Green caught 81 passes for 1,076 yards and eight touchdowns as a sophomore. He finished the season with 100-yard receiving games in four of his final six.

Two weekends ago, Green had an opportunity to take his official visit to USC and spend time with the coaches and the team.

“It went really well,” Green said. “Everything was really cool and I felt way more comfortable than I even expected.”

Green has a very solid relationship with the USC coaches and said that was one thing that stood out about their recruitment of him.

“It’s no difference,” Green said of the relationship and recruitment now versus when he was uncommitted. “During the recruiting process I was talking to someone every day, whether it was Armond (Hawkins), Clay Helton, Gavin (Morris), KC (Keary Colbert), Donte (Williams). And after I committed, it’s still the same way.”

The family atmosphere during the visit was notable, and something that has been mentioned by virtually every visitor. Green said the coaches’ personalities really stood out.

“I feel like they’re very big on family and all-as-one,” Green said.

Green contributes at Alemany as a cornerback and a special teams returner as well. He said that three-phase athleticism had USC head coach Clay Helton throwing around a big-name comparison.

“Coach Helton said he loves the way I play and that I remind him of Adoree’ Jackson, in that No. 2 as well,” Green said.

On the visit, he had an opportunity to meet one-on-one with Colbert, who went over some of USC’s offensive concepts and how Green could be utilized at the next level. Green said there was some Amon-Ra St. Brown stuff highlighted and that he’d likely be used as a slot receiver.

“I feel like when I get the ball in my hands quickly, I’m able to do anything,” Green said. “I like what I can do. I feel very confident in my talent.”

Green took his official visit alongside some top out-of-state targets, including four-star athlete Gentry Williams (Tulsa, Okla./Booker T. Washington) and four-star defensive lineman Chris McClellan (Owasso, Okla./Owasso). He went ahead and leaned all the way into his recruiting responsibilities, now that he’s committed.

“I’m recruiting the guys from out of state as well,” Green said. “I had to tell them this one weekend can’t justify LA. There’s so much stuff to do and so many opportunities here.”

“They’re pretty big targets,” Green said. “I need somebody to play with.”