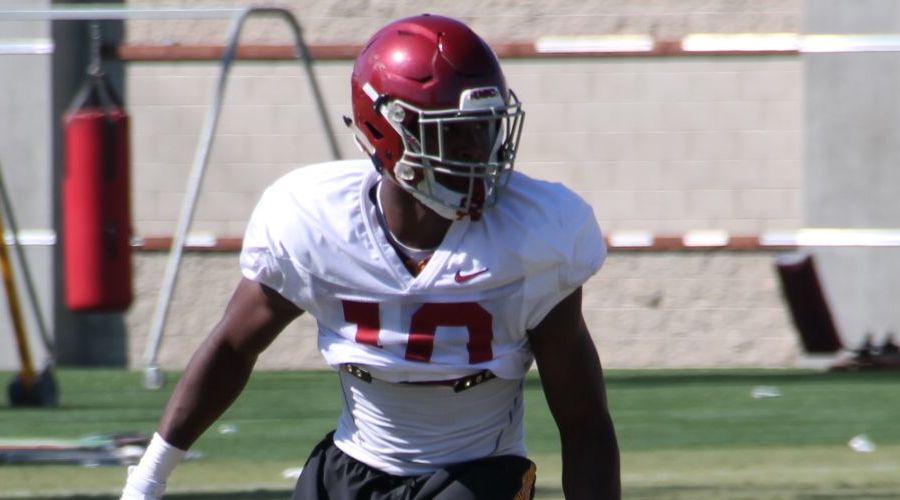 With the 2015 season in the books and the Trojans now focused on gearing up for the spring, here’s a glance at how some of the players who redshirted this past season looked in practice in the fall and where they appear to be sitting in terms of their development.

Darnold made a faster-than-expected impression, showcasing a strong arm, poise in the pocket, and the ability to make plays with his legs right from the moment fall camp opened up. Spending this past season with the scout team, he will now battle Max Browne for the starting job. And while Browne certainly holds a significant edge, with what Darnold has shown in practice, there is reason to believe that he can at least make it interesting.

After a promising freshman campaign, Harris underwent surgery on both hips and missed the entire 2015 season. The good news is that he was healthy enough to participate in some late bowl practices, and he should be able to jump right into the mix at the slot receiver position as soon as spring ball begins.

With a hulking build and plenty of athleticism, there is a lot to like about Hemsley, but he’s still extremely raw at this stage. That fact was particularly evident in one-on-one drills in practice as he struggled at times when going up against the veteran defensive linemen. Listed as the No. 3 left tackle on the final depth chart of the year, the conditioning workouts this offseason, as well as spring practice, will be vital in determining his continued long-term development.

A backup at ‘sam’ linebacker, Houston was hampered by a back injury and missed extensive practice time over the last half of the season. While the injury is not believed to be significant, it is something to keep an eye on, and it will also be important for Houston to continue to fill out, physically, to become the impact performer that everyone expected when he signed out of high school.

A transfer from Florida, Imatorbhebhe had to sit out the year due to NCAA rules. He did participate in practice with the scout team, however, and he showed off some strong skills as a pass-catching tight end. With the Trojans’ lack of depth at the position, it wouldn’t be a surprise to see Imatorbhebhe become a key member of the rotation in 2016.

Another player who spent a majority of the season with the service team, primarily at right tackle, Johnston arrived in August as a blueshirt. He’s likely a couple years away from contributing, although his quick feet and fluid movement leads you to believe that he can be a player for the Trojans in the future.

Lining up primarily at defensive end in Justin Wilcox’s 3-4 scheme, Rector flashed at times in practice this past fall while running with the scout team. And while he has definitely bulked up since his high school days at Los Angeles (Calif.) Loyola, his biggest weakness right now is that he is still a little too light — particularly for Clancy Pendergast’s expected 5-2 system, which tends to rely on interior defensive linemen with great size.

Ross was put on the redshirt track after suffering a shoulder injury that slowed him over the first few weeks of practice, but he showed a ton of promise throughout the remainder of the season on the scout team. A physical player with a nose for the ball, there was always chatter that he might have that redshirt tag lifted, but it never materialized. He certainly appears to have the tools to make his presence felt as a member of the safety rotation in 2016.

With just one year of experience playing football prior to his arrival at USC, Scott was definitely the least refined, technically, of the five freshmen interior defensive line arrivals. Lining up at defensive tackle with the service team, he did make strides as the season progressed, both in terms of his play, as well as his conditioning. He will likely serve in a backup role next season so long as he has a strong offseason and spring.

Smith, a prototypical center, spent a bulk of the season on the scout team, and even took reps with the No. 2 and No. 3 offense at times in practice when numbers got thin at the position. He’s also versatile enough where he took some reps at guard. When it comes to his technique, he’s already fairly solid, but he does still need to bulk up some more before he can be relied upon on a consistent basis.

Tilbey, from Melbourne, Australia, arrived on campus one week before the Trojans’ season-opener as a blueshirt from San Francisco City College, and with Kris Albarado having now departed, he figures to step in as USC’s starting punter in 2016. Showcasing the Australian style of punting that is growing more and more prevalent in college football these days, it will be interesting to see how he develops under new special teams coach John Baxter.