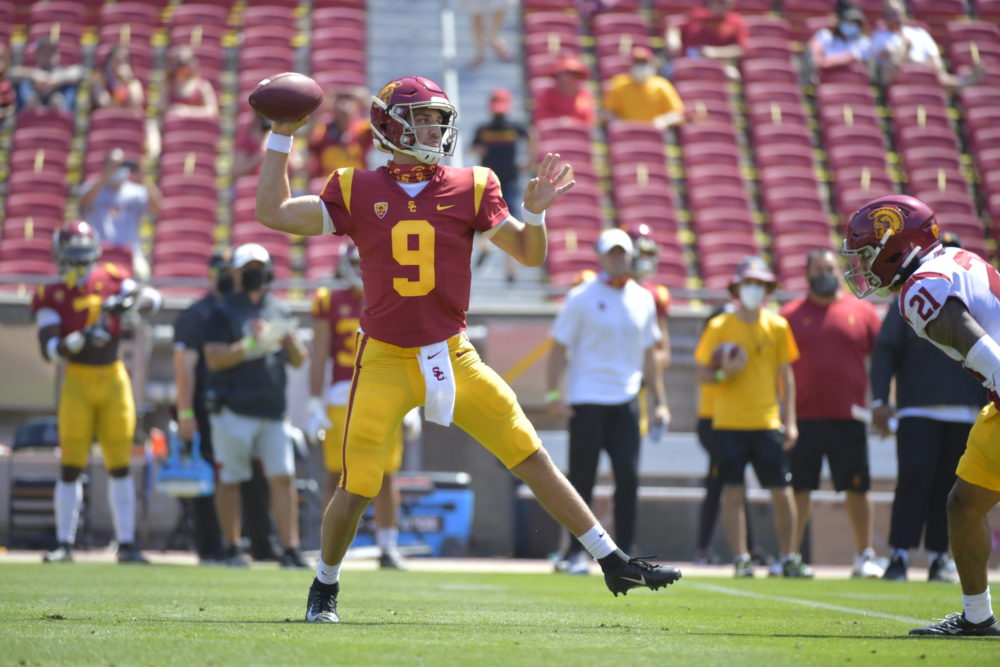 USC quarterback Kedon Slovis and outside linebacker Drake Jackson were named to prestigious college football awards lists on Monday. Slovis was included on the watch list for the Maxwell Award, established in 1937 and given to the college player of the year. Jackson is on the watch list for the Bednarik Award, given to the outstanding college football player since 1995.

USC payers have won the Maxwell Award three times. They all went to Trojan running backs, with O.J. Simpson, Charles White and Marcus Allen winning in 1968, 1979 and 1981, respectively. Alabama players have won it three times since 2013, with wide receiver DeVonta Smith taking it home last year. Before that, a quarterback had won it four times in a row and six times in eight years.

Former USC linebacker Rey Maualuga is the only Trojan winner of the Bednarik Award, doing so in 2008.

USC needs big seasons from both Slovis and Jackson in 2021. After standout freshman campaigns in 2019, it’s fair to say that neither took a significant step forward in 2020. Slovis dealt with issues he called both mental and physical, in consistently throwing tight spirals early in the season, stemming from the injury suffered late in 2019. Jackson dealt with adjusting to a new position at outside linebacker, having moved back from the defensive end spot he played as a freshman.

Slovis’ completion percentage fell from 71.9% to 67% and his quarterback rating from 167.6 to 144.1. Jackson had two sacks and an interception in six games.

It’s a testament to how good both were as true freshmen and how good they are expected to be each week, that last season could be considered at all a regression for either. Jackson provided a game-sealing pass rush against Arizona State, forcing an incompletion on fourth down to effectively end the game. He had two sacks against Arizona, recorded an interception against Utah, had 2.5 tackles for loss and a big late stop against UCLA to earn conference Defensive Lineman of the Week honors. He finished the season with four tackles against Oregon in the Pac-12 Championship game.

If the Trojans are going to compete for a conference title this season, Slovis and Jackson will need to lead the way on both sides of the ball. The USC coaches have talked about establishing more of a running game, but Slovis is driving the bus. How well he throws it this year will dictate how potent the USC offense is each week. Defensively, Jackson serving as an impact player whenever he is on the field will open things up for other players, including defensive end Tuli Tuipulotu and Nick Figueroa, as well as incoming freshman Korey Foreman. Last season, Jackson was part of a defensive front that ranked third in the country in percentage of quarterback pressures created when just rushing four.