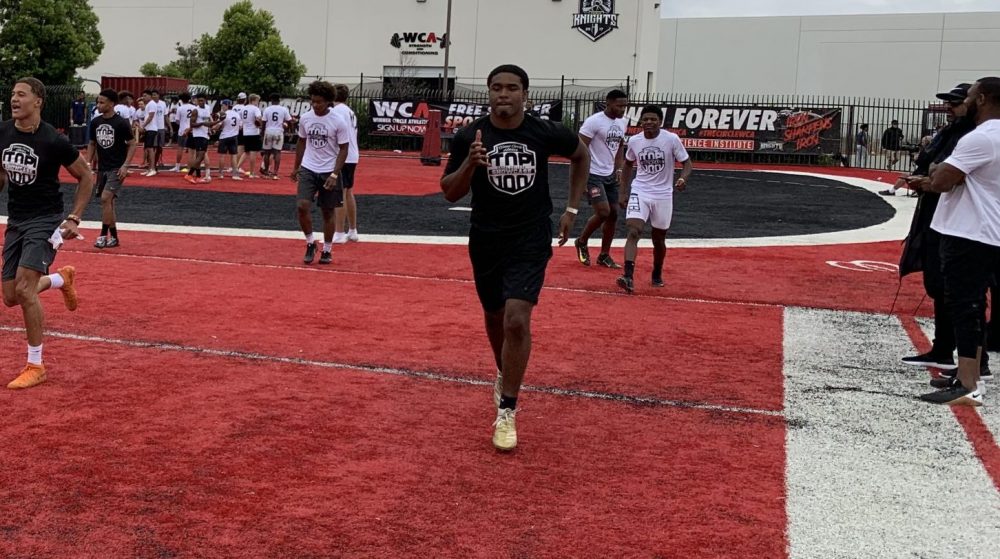 USC’s 2021 class of defense backs is going to be an impressive haul, as the Trojans already have five four-star cornerbacks and safeties committed. But to the competitive USC defense coaches, all that means is that they’ll want the 2022 haul to be even better. One player who could help make that happen is four-star safety Kamari Ramsey (Chatsworth, Calif./Sierra Canyon).

As with many Southern California prospects in general and defensive backs specifically, Williams was a huge hire for the Trojans.

“Them getting coach Donte changed a lot of things,” Ramsey said of USC. “I saw more recruits come in and it seems like a whole movement.”

Ramsey has visited USC twice now–once to participate in a summer camp and another time for the major recruiting weekend earlier this spring, just before the NCAA-mandated dead period due to coronavirus precautions.

While that dead period prevented recruits from getting an opportunity to really see the new USC defensive schemes under defensive coordinator Todd Orlando, Ramsey said the coaches have done a good job in illustrating to himself and other recruits just what is to be expected.

“I got to sit down with coach Naivar and he showed me what the defense looks like,” Ramsey said. “It’s kind of crazy to see how complex and how simple it is at the same time.”

Ramsey said a majority of what the USC coaches showed him was film of their time at Texas–the previous stop for both Orlando and Naivar–but also some of the on-field work they’ve been able to film during their time at USC.

During his introductory press conference at USC, Naivar described the safety play in this defense as “fun,” mentioning all the different ways a safety could be used. That would seem to fit into Ramsey’s wheelhouse, as he prides himself on being able to do just about everything on a football field.

“That’s always been my game. I’ve always been on teams where we didn’t have a star player, so I had to work my way in, find my identity and just play ball,” he said. “Now if you look in the League, safeties are playing a lot of different positions and lining up all over the field. The game is going that way.”

USC is squarely in the mix for Ramsey, though the Trojans will need to beat out a number of other programs. He said Arizona State, Ohio State, Stanford, UCLA and Virginia Tech are all earning his focus right now, in addition to USC. Arizona State was the landing spot for Hawkins, as he’s now the defensive backs coach there. Stanford and UCLA are always going to recruit Southern California hard. Ohio State is challenging LSU for the moniker of DB U right now, and the Buckeyes came into the region just last year for fellow safety Kourt Williams. And Virginia Tech is trying to make serious inroads into both Texas and Southern California, and already has a commitment from Ramsey’s high school teammate, 2021 cornerback DJ Harvey.

USC coaches haven’t been shy about publicly pitching “Take Back the West” when it comes to their goals at USC. On the field, it means dominating Pac-12 play. Off of it, it means keeping the best West region prospects flocking to USC.

“They always remind me there’s no better place than L.A.,” Ramsey said of the Trojans’ recruiting pitch. “That would be me staying home and building relationships and connections with people where I’m from.”

The coaches have also been quick to point out that their prior recruiting success comes from building relationships with prospects, not just recruiting a football player. That’s something that Ramsey echoed in his thoughts about Naivar.

“It’s not only about football when we talk,” Ramsey said of the Trojans’ safeties coach. “It’s about school, my family. He cracks jokes. He’s a cool person. He cares about the person more than the player, and that’s what I respect about him.”

As for a timeline with regard to the rest of his recruiting process, Ramsey said the dead period has “messed a lot of things up” in terms of potential visits. He did say he wants to take the recruiting process slowly, making sure he fully considers every opportunity.

At this point, there really is no certainty on anything for Ramsey, as well as many 2022 recruits. California high school football is scheduled to begin official practices in December with an eye toward playing games beginning in January. Several top recruits have already said they are opting out of that spring season in order to enroll early at their college of choice.

But no such option exists for 2022 recruits, who will now be scheduled to play two seasons in one calendar year, increasing the chance for an on-field injury or perhaps even fatigue that could lead to college coaches reconsidering scholarships next fall.

Those are hypotheticals, but at this point all options are on the table in a situation that nobody going through it has experienced before. Ramsey said he has been discussing scenarios with his family, and that some players have talked about strategically sitting out a game here or there in order to manage the physical toll two seasons would take on them.

“Playing two seasons in one year is asking for injuries,” Ramsey said. “It’s kind of crazy. Right now you just have to play it by ear because a lot of things can go on. You just have to stay ready.”

USC will have an opportunity to bring in an absolutely loaded defensive backfield in the 2022 class, as five-star cornerback Domani Jackson (Santa Ana, Calif./Mater Dei) is a top USC target, and versatile defensive backs in Ramsey, Larry Turner-Gooden (Playa Del Rey, Calif./St. Bernard) and Ephesians Prysock (Mission Hills, Calif./Alemany) are all top-20 California prospects. Zion Branch (Las Vegas/Bishop Gorman), the No. 2 safety in the country, is another priority defensive back target.