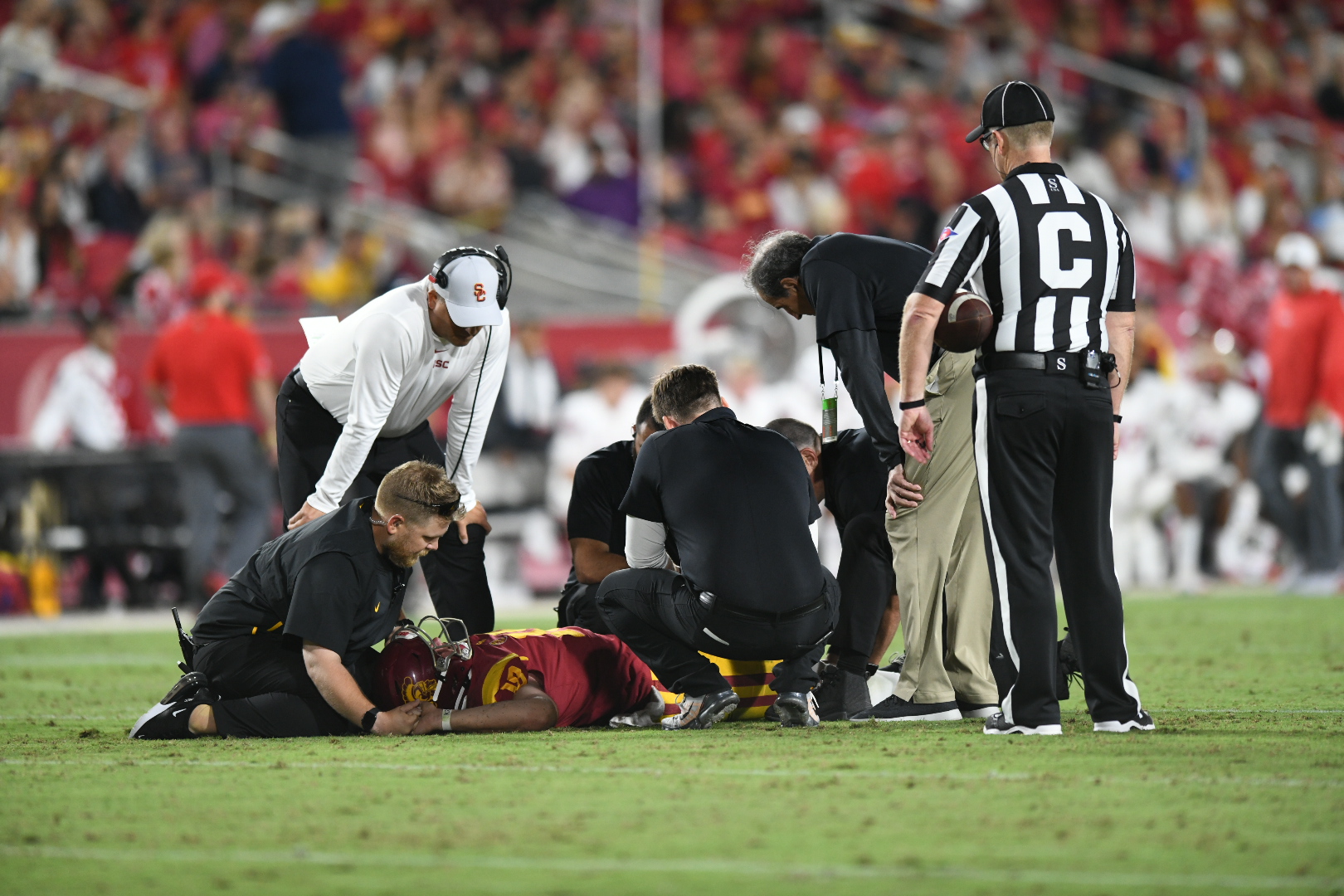 Daniels was sacked late in the second quarter and remained down for an extended period. He was helped to the sideline as he avoided putting weight on his leg. Eventually, Daniels was carted to the locker room and came back to the sideline later on crutches and with his knee in a brace.

“JT Daniels did suffer an ACL injury as well as meniscus tear,” Helton said on his Sunday evening media call.

Daniels will undergo surgery in the upcoming weeks and he will be out for the season. Helton said the recovery timetable is nine to 12 months, and that it is largely more mental than physical.

“I want to thank JT for the amount of work he has put in not only to himself but to our football team,” Helton said. “He will be missed, but we will have to move forward. We wish him nothing but the best.”

True freshman quarterback Kedon Slovis entered the game for the Trojans and went 6-for-8 for 57 yards (41 of them coming on one completion), with one interception. Slovis’ second-half drives resulted in a fumble, rushing touchdown, interception, punt, turnover on downs, and a kneel down to end the game. Slovis will be the starter for the Trojans when they host the Stanford Cardinal on Saturday night.

Helton said he spoke with Kedon after the Fresno State game, and he was pleased with the performance from his freshman quarterback.

“No fear. No hesitation,” Helton said of Slovis. “We thought he made good decisions on the night.

“Anytime you’re thrown into that situation and you find a way to win the game, you’ve done your job as a backup quarterback.” Helton said, adding that Slovis is anxious to get to work this week as the starter. “You always treat it like you’re a starter each and every week, but now you know you’re walking into that first play.”

Helton said he saw no fear in Slovis’ eyes when his number was called following Daniels’ injury, and that ability to calmly step up on a big stage regardless of circumstances was one of the things that drew the USC coaches to Slovis during his recruitment.

Helton said there is “stuff to get better in the back end,” but that with such a young secondary, they did a nice job.

He praised the offensive line and running backs, and specifically the combination of Stephen Carr and Vavae Malepeai.

“I was really happy for Stephen and Vavae,” Helton said. “To be able to get those two kids to go out there and do what they did. It was neat to see them work off each other. I think we’re all very happy for Stephen…I don’t think people realize how hard that back surgery was on him.”

Helton had no issues with punter Ben Griffiths, who did not allow any punt return yards but didn’t seem to get the length on his punts that he’d been hitting for the most part during practices.

He also said he would absolutely make the same decision to go for it on fourth down late in the game. Helton acknowledged that they’d converted four third-and-short situations, plus a touchdown on a goalline situation earlier in the game.

“I’ll always play aggressive and believe in them,” Helton said of his players and their ability to convert important short yardage plays.

He reiterated his frustration with the defensive front four, but only in their inability to bring the quarterback to the ground when they had him in their grasp. He said he had no issues with the tackling anywhere else on the field.

“We had three sacks on the night and we thought we could get as many as eight,” Helton said. “Credit to him…We thought he gave everything he had from a competition standpoint.”

Helton said the front four did a great job of moving the quarterback off of his spot and out of the pocket, but just couldn’t bring him to the ground.

He also praised Velus Jones for his kickoff touchdown return, calling it “the highlight of the game and probably the play that separated the game.”