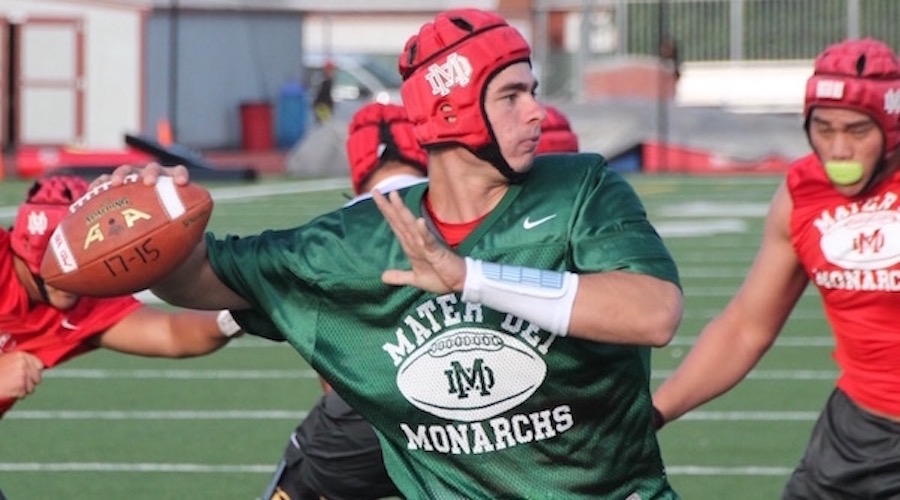 The Trojans picked up a major verbal commitment on Sunday night when JT Daniels announced that he would be heading to USC.

Daniels is the consensus top-ranked pro-style quarterback in the class of 2019 as a 6-2, 205 junior at Mater Dei.

The University of Southern California

JT has been the starter for the Monarchs since early his freshman year, the first freshman since Matt Barkley to start that early for Mater Dei, when he took over the starting job after Matthew McDonald (son of Paul) went down with an injury. As a freshman he completed 174-313 passes for 3,042 yards, 33 TD’s and 4 picks. As a sophomore he completed 315-423 passes (.745%) for 4,849 yards, 67 touchdowns and 6 picks while leading Mater Dei to a 13-1 record and CIF finals game loss to St John Bosco. That’s 100 touchdowns and 10 picks before he has started his junior year.

Early in the recruiting process it had looked like Stanford was the team to beat, especially after the Cardinal offered earlier this spring, but Clay Helton and the Trojans have been making an impact on Daniels and his Mater Dei teammates such as Amon-Ra St. Brown, and the resulting commitment by Daniels today will be another huge sign of the recruiting prowess Helton has shown so far in his coaching career.

As can be noted by his stats, JT is a very accurate QB and former Saddleback College coach Bill Cunerty (who played at USC in the early 60’s and announces prep games for local cable in OC) said that he throws the most accurate ball he’s seen from a high school quarterback. Daniels also has an impressive football IQ and is given a lot of free range to call his plays in the Mater Dei system. He is not known as a mobile quarterback, more of a pure pocket passer.

Daniels is the 2nd commit for the Trojans in the class of 2019 to go along with LB De’Gabriel Floyd, and it’s always nice to add the top-ranked player at the important position of quarterback. It will be interesting to see how this impacts the search for a quarterback in the class of 2018 as the Trojans appear to have their sights set on Justin Fields from Georgia, the top-ranked QB in this class.

Other recruits react to news of Daniels commit

SC just got the best QB in the nation… Congrats! https://t.co/bFIS2WyINx

Huge Congrats to my friend and QB❤️ big things ahead. might have to join you there ? https://t.co/tDvlexqjeT