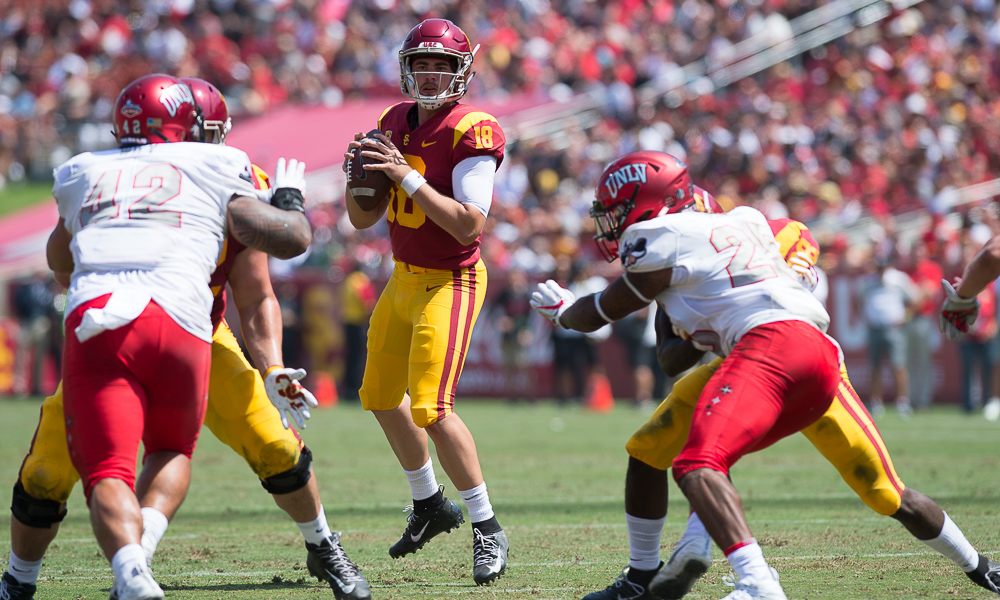 USC’s quarterback depth chart took a major hit on Thursday as former starter JT Daniels announced that he will transfer to Georgia.

Its another twist in the still-young career of Daniels, who graduated a full year early from Santa Ana (Calif.) Mater Dei in order to join USC’s 2018 recruiting class. Following the departure of Sam Darnold, the Trojans had a huge hole at the quarterback position. Daniels was able to beat out Jack Sears and Matt Fink for the job, and he threw for 2,672 yards and 14 touchdowns with 10 interceptions.

Daniels beat out Sears, Fink and true freshman Kedon Slovis last fall, but was injured late in the first half of the first game of the season. The knee injury forced Daniels to miss the entire 2019 season, and set the stage for Slovis to take the reins as the USC quarterback for the foreseeable future.

Daniels entered the transfer portal in mid-April and had the opportunity to return to USC if he wanted, though Slovis was fully expected to keep the job as the starting quarterback.

Daniels likely won’t be eligible to play in the 2020 season unless he is granted an eligibility waiver. An NCAA vote to allow one-time transfers without penalty has been tabled to January.

Looking back at the spring of 2018, as Sears and Fink battled for the job with Daniels watching over their shoulders as a frequent practice visitor, it would have been impossible to guess that by June of 2020, not only would Fink be the only one left on the roster, but that the USC quarterback position would be safely in the hands of Slovis. Sears recently announced that he will transfer to Boise State.

Daniels would have provided a terrific option as a backup this season, and now USC’s quarterback depth chart is officially a concern. Each of the last two seasons, the Trojans have had to use their No. 3 quarterback for real game action. At this point, Fink is the clear No. 2, with Vanderbilt grad transfer Mo Hasan immediately assuming the No. 3 position once he arrives on campus. Without Daniels available during the first day of this past spring ball, 5-foot-9 wide receiver Brad Aoki served as a quarterback.

This also makes USC’s pursuit of a second quarterback in the 2021 recruiting class that much more important. The Trojans already hold a commitment from four-star quarterback Jake Garcia (La Habra, Calif./La Habra) and have placed a high priority on fellow in-state four-star signal-caller Miller Moss (Mission Hills, Calif./Alemany), who has USC among his final four programs, along with Alabama, LSU and UCLA. With Fink set to exhaust his eligibility following the 202 season, whatever players USC signs in this recruiting class could battle for the No. 2 spot in 2021 and potentially have a shot at a starting job the following season if Slovis becomes a three-and-out prospect for the NFL Draft.