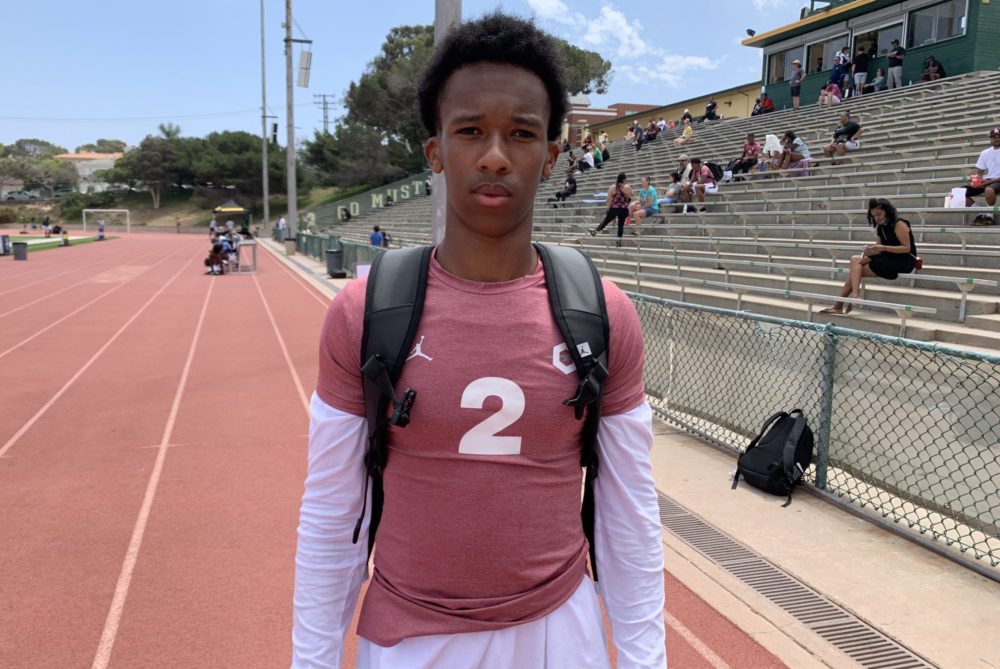 Cornerback Jordan Shaw wasn’t an early riser on the recruiting scene, collecting offers or attention as a freshman. But the Class of 2023 defender is ascending on that stage this offseason, putting together strong showings and making a name for himself in this next class.

The Downey (Calif.) St. Pius standout first hit the radar after a standout showing at a Rivals camp in the spring. When video of that got out, Shaw collected offers from Arizona State, Nevada, Oregon and USC.

“They like how I break on the ball,” Shaw said of the coaches who extended offers.

Shaw does have great instincts at the position and is typically tasked with doing a bit of everything in the defensive backfield, coming up to make tackles against the run and ranging deep as a centerfielder. His quickness to the ball after the throw stands out and he’s been able to showcase his footwork and ability to stick tight in coverage without being overly physical in a way that would draw flags in the fall.

We handed out position MVPs over the weekend @RivalsCamp L.A. — but @rivalsfriedman has some awards of his own to hand out.

Check out the list of honorees, including the "Play of the Day" award to 2023 DB Jordan Shaw: https://t.co/jxB0rmPUuD pic.twitter.com/OCcW8uUh2Q

He said the USC offer came from cornerbacks coach Donte Williams and that he was able to speak with the coach on the phone for a bit, but the communication hasn’t developed beyond that at this point. Shaw had planned to camp with the Trojans in June before the camps were canceled.

It might not be long before the 6-foot, 165-pound cornerback goes national.

Shaw camped at Colorado, Michigan, Ohio State and UNLV this summer. He said he did well at all of them, but the performances in front of the Michigan and Ohio State coaches stood out. He picked up Defensive MVP honors at Michigan and led the Ohio State camp in interceptions.

Michigan holds a special place for Shaw. His father, Russell Shaw, played wide receiver for the Wolverines, catching 46 passes for 535 yards and five touchdowns and starting at receiver for Michigan’s 1997 national championship team. The younger Shaw said Michigan was his team growing up because of his dad.

He also started at wide receiver when he began playing football, but eventually moved over to defensive back, playing safety and corner. He said his history at wide receiver combined with picking up plenty of lessons from his dad helps him have a better understanding of what receivers are trying to do on any play.

Shaw will play both ways this season, both defensive back and wide receiver, and said his goals are to lead the team in interceptions and turnovers created, as well as score a handful of touchdowns.

Last week, Shaw had the opportunity to participate in The Opening and was part of a 7on7 team that featured some real 2023 defensive back talent, in five-star A.J. Harris (Phenix City, Ala./Glenwood) and four-star Rodrick Pleasant (Gardena, Calif./Serra). Shaw said both cornerbacks impressed him and he was happy to prove himself against the kind of competition there on both sides of the ball.

“It pushes me harder, trying to be the best I can be,” Shaw said. “Getting more reps in one on ones here got me better in my man coverage.”

Cornerback recruiting for USC in 2023 will be interesting to watch. The Trojans took a big group in 2019 and have seen mixed results so far. The 2020 class didn’t feature any defensive backs at all and the Trojans have been making up for that in the 2021 and 2022 classes. Cornerbacks Ceyair Wright and Prophet Brown, plus nickel Jaylin Smith were big signings in 2021 and USC’s group of committed 2022 cornerbacks is unrivaled nationally, with five-star Domani Jackson (Santa Ana, Calif./Mater Dei) and four-stars Jaeden Gould (Oradell, NJ/Bergen Catholic) and Fabian Ross (Las Vegas/Bishop Gorman) committed, and the Trojans squarely in the mix for high four-star Gentry Williams (Tulsa, Okla./Booker T. Washington).

If that group all signs with USC, the Trojans might wind up being very selective with cornerbacks in the 2023 class and there are plenty of West Coast and Southern California options available, including Shaw.