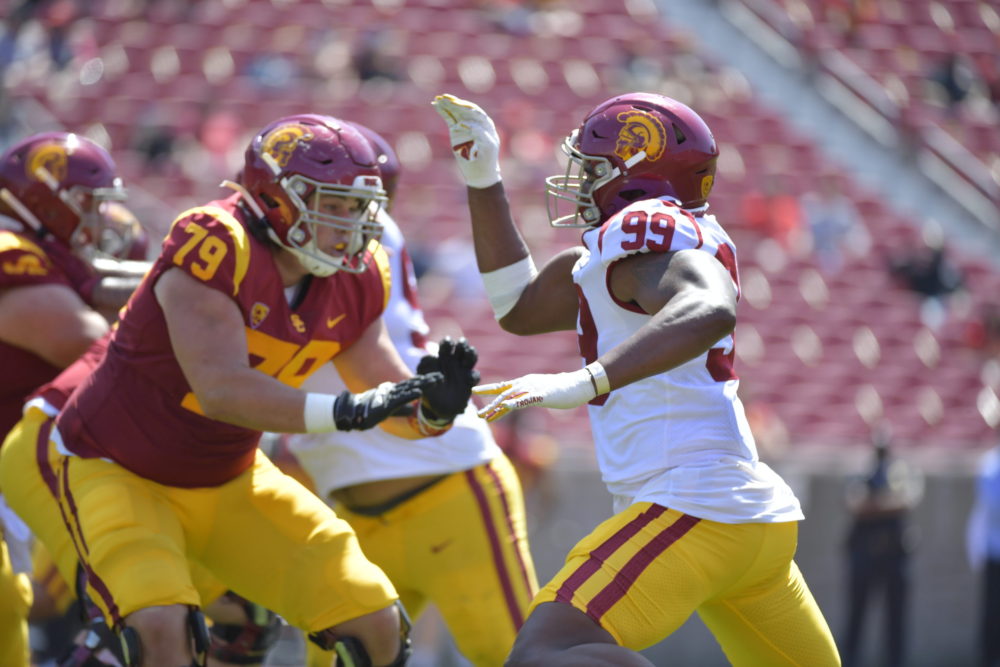 Quarterback Kedon Slovis and wide receiver Drake London are the headliners for the USC offense heading into the 2021 season, but how well the standout juniors perform and how potent the Trojans offense is overall will hinge on a different group.

The much-maligned USC offense line needs a big year in 2021. The unit has produced a first-round NFL draft pick each of the past two years, but it has not been a feared group, nor has it paved the way for a successful ground game or kept a clean pocket for the quarterback. USC had to use three quarterbacks during the 2018 season because of injuries, three quarterbacks in the 2019 season because of injuries and Slovis was injured on the final snap of a shortened 2020 season.

The rushing numbers don’t need repeating, but will absolutely serve as motivation for the Trojan big men. USC finished last in the conference in rushing last season and was one of just nine programs to not rush for at least 100 yards per game. The Trojans also finished last in the conference in yards per rush, totaling nearly 200 fewer yards on the season than Arizona, which had the same number of rushing attempts.

Out are left tackle Alijah Vera-Tucker, which is a significant blow to the line personnel, as well as position coach Tim Drevno. In is new offensive line coach Clay McGuire, who was hopefully the biggest missing piece of the entire offense.

The line returns starters in left guard Andrew Vorhees, center Brett Neilon, right guard Liam Jimmons and right tackle Jalen McKenzie. But there is no guarantee that group takes the field exactly like that against San Jose State to open the season. The first half of spring ball saw those starters man their first-team positions exclusively, but the second half of spring saw plenty of shake up, with backups running with the first team and players swapping positions regularly. Neilon said the competition all along the line has been one of the three hallmarks of McGuire’s philosophy.

“I think he has experience in the offense — simplifying it down — he really knows the terminology and is helping us get the blocking schemes correct,” Neilon said. “Obviously for him, the run game’s been huge and trying to perfect that and get us all on the same page. I think that’s sometimes where we struggled. I think that will be huge from him…And then competition. He pushes us and is deploying multiple lineups out there on the field. He’s going to play the best five and it’s creating a lot of competition. His experience in the offense and then his competition and the run game are the three I would say.”

One player to keep an eye on during fall camp is second-year lineman Jonah Monheim. No lineman drew more praise from head coach Clay Helton, offensive coordinator Graham Harrell or McGuire during the spring and Helton singled out Monheim as having one of the best springs of any player on the roster.

“I felt a big progression in spring,” Monheim said. “Just because fall camp and fall season, you’re so focused on the game. But spring, you get a little more emphasis on development and things like that. I felt really good developing from the start to the end of spring. The coaches did a really good job, my teammates did a great job. I thought I learned a lot in spring.”

Monheim saw most of his action at right tackle, but reiterated that the depth chart across the line is open.

Monheim and Courtland Ford are the 2020 signees who saw the most time this past spring. Ford ran with the first team at left tackle throughout spring. Those are also the two young linemen who saw action against Washington State last season, when the offensive line was hit by Covid protocols and multiple contributors were missing.

Under McGuire, the USC offensive line is going to look to set the tempo up front, and Monheim’s physical maturity from his freshman season to now could help him there.

One of the biggest benefits for the offensive line this season is a return to normalcy for the whole program. While players fought through the disjointed offseason and regular season of 2020, the time away from campus and the weight room likely took a larger toll than players and coaches led on last season.

“It’s super different from last year,” Neilon said. “It’s night and day. Being around the guys, the competition aspect is huge. The camaraderie aspect that we missed out on for six months or whatever it was. I think that aspect is huge. Getting in the weight room, the running, getting our bodies in tip-top shape, which I didn’t think we had last year with the quarantine and all of that. I think it’ll make a huge difference in terms of our conditioning and strength.”

Monheim would be right to play his USC career with a couple chips on his shoulders. He is part of a USC offensive line that is very much under a microscope this season, He’s also a member of USC’s 2020 recruiting class, which has been hammered by fans and media for being one of the lowest-ranked classes (if not the lowest-ranked) in USC history.

“I’m not the biggest news or media guy, but I heard stuff, this and that about the recruiting class,” Monheim said. “But I love everyone in that class and we’re just out there working hard, trying to do our best. I don’t listen to too much of the outside noise, the highs and lows — more just focused on what we’ve got.”

What USC has is a good shot at a Pac-12 title provided things come together up front. Slovis returns as the top quarterback in the conference and has weapons outside in London, Gary Bryant Jr., Bru McCoy and a number of transfers and young players looking to establish themselves. The backfield has talent as well, in Texas transfer Keaontay Ingram, veteran Vavae Malepeai, TCU transfer Darwin Barlow, Kenan Christon and freshman Brandon Campbell. There is a potential soft spot in the middle of the defensive line with the departures of Marlon Tuipulotu to the NFL and Jay Toia to UCLA as a transfer, plus the injury to Brandon Pili, but the rest of the defense should be able to take another step forward from last season with another year of experience and development under the defensive coaches. That makes the offensive line the great question mark this season and answers won’t be delivered until game action starts in earnest.

“Going into fall camp, we’re just competing,” Monheim said. “We’re doing our best to improve, earn spots and compete, get our best five on the field. I think the coaches have done a great job setting us up. We’ve got a great group of teammates around us and hopefully we put a great product out there and feel good about it.”

Ford and Monheim are the young guys to watch along the line this fall, with Casey Collier, Andrew Milek and Jason Rodriguez potentially factoring into the two-deep as well. USC has signed nine high school offensive linemen in the 2020 and 2021 classes, but Monheim is the only four-star prospect of the bunch.

“They’re doing a great job and coming a long way in their first offseason,” Neilon said of Monheim and Ford. “Their bodies are changing, getting stronger, which I think they missed out on last year. And then obviously getting those extra reps — they got a ton of reps in the spring. That’ll come in handy during the season. I think that experience will be huge for them and then also their bodies maturing, getting stronger, faster, all that.”

“I’m super excited for this season,” Monheim said. “It’s been a lot of fun getting ready for the season. It’s more back to normal, from the full programs with coach Steiner in the weight room to training on the field. I’m super excited moving forward and ready to work hard and compete.”