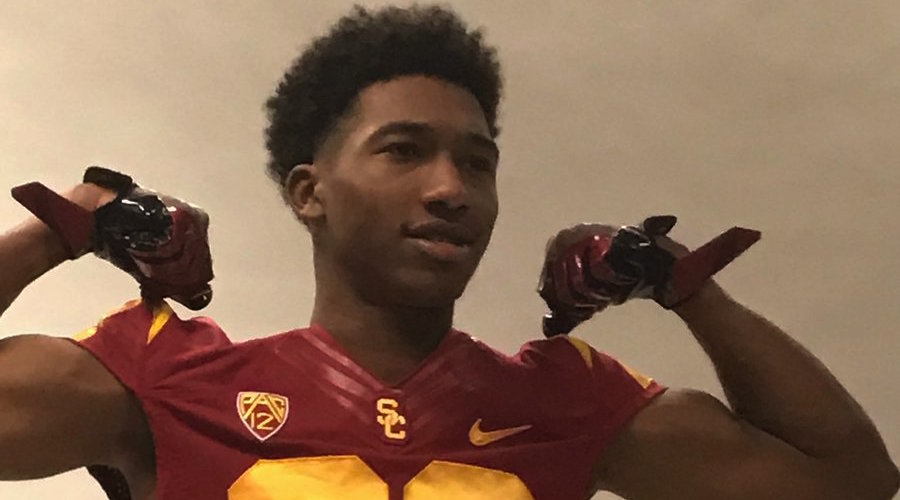 Oakland (Calif.) Bishop O’Dowd cornerback Je’Quari Godfrey gave a verbal commitment to Cal back in May, but after receiving an offer from the Trojans earlier this fall, they immediately shot up his list, and on Sunday, following his official visit to the Los Angeles campus, the NorCal star announced that he had flipped his pledge to USC.

The 17th commit for the Trojans from the Class of 2017, Godfrey is the second from his own high school, joining offensive lineman Alijah Vera-Tucker.

According to Godfrey, his decision to commit to USC was one that he actually made before he even boarded the plane for the visit on Friday.

“I went into the trip knowing that it was something that I wanted to do,” Godfrey said. “I knew I wanted to go to USC. The trip itself just reassured me of that. What went into my decision was the fact that USC wins a lot of games, they have a really good program, a really strong recruiting class, and I just want to be a part of that.”

With Cal having fired Head Coach Sonny Dykes last week, and then replacing him with Justin Wilcox on Saturday, it’s natural to assume that the coaching shakeup in Berkeley might have had something to do with Godfrey’s switch, but as he explained, that simply isn’t the case.

“It really wasn’t that much of a factor,” Godfrey said. “I had my mind made up to go to USC before I even heard that they had fired Coach Dykes, but once I did find out it was a little more convincing that I was making the right decision.”

One of 10 official visitors hosted by the Trojans this past weekend, Godfrey was simply blown away by the experience, with the recruits’ visit to the Coliseum serving as the highlight of the trip.

“For me, it was putting on the USC jersey, No. 22, and heading out to the Coliseum, standing at the 50-yard-line, and looking around at the stands and the big screen,” Godfrey said. “Just looking at the stadium itself, with all of the history behind it, knowing all of the players who had played there, it was just amazing.”

Godfrey’s decision was further cemented by the way that he hit it off with the current members of the team, especially his host, freshman wide receiver Josh Imatorbhebhe.

“He’s hilarious,” Godfrey said. “He showed me around, and he gave me a lot of knowledge about the USC program, the benefits of being in L.A. and being a Trojan. He just gave me a lot of good information. And then as far as the other guys on the team, from the minute I landed and met them all, it just felt like family. They just embraced me and welcomed me, and that includes the coaching staff and the coaches’ wives, it just felt like family.”

The fact that a familiar face, Vera-Tucker, will be joining him at USC also figures to add to his comfort level.

“Playing with him in high school has been great,” Godfrey said. “He gets his thing done on the offensive side of the ball, and I do my thing on the defensive side, and we both do what we do to contribute to win games. So, I’m looking forward to playing with him again at the next level.”

Standing 6-foot-2, 180 pounds, Godfrey is a long cornerback with outstanding speed. He had a strong senior campaign at Bishop O’Dowd, but suffered a late-season knee injury that forced him to miss the Dragons’ playoff run, which culminated in a CIF-State title.

Godfrey said that the coaching staff at USC did their homework when it came to his injury situation, and with him expected to make a full recovery by the time that he arrives on campus this June, they’re more than content to take his pledge.

“I really appreciate them for that, because even though it was something that wasn’t as detrimental as another injury might be, it was pretty serious, but they saw my film, they know what I can do, and they talked to doctors about how quickly I will come back and how strong I will come back, and they believe everything will be OK by the time I get there.”

With his decision behind him, and no other scheduled official visits on the horizon, Godfrey can now turn his focus toward his future at USC. And with some impressive commits in the fold already, and the Trojans still picking up steam, he’s confident that he’s going to be a part of a special recruiting haul at USC on Signing Day.

“With guys like me at corner, Bubba Bolden at safety, it’s looking really good for the incoming class,” Godfrey said. “And then as far as the offense goes, with Stephen Carr at running back, Alijah at offensive tackle, I see a lot of positive things going for USC.”