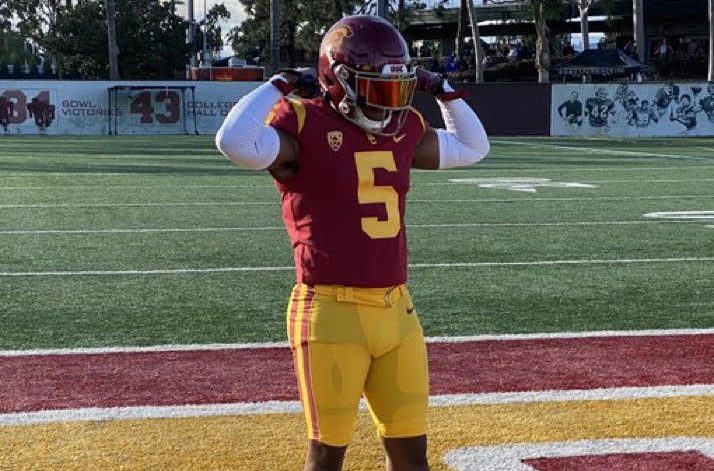 The USC Trojans are likely hoping to add a second running back commitment to the one they already hold from tailback Brandon Campbell (Katy, Texas/Katy) in the 2021 class, but position coach Mike Jinks has his sights set on future classes as well. This week, the Trojans extended an offer to a local 2022 running back prospect in Jaylen Thompson (Playa Del Rey, Calif./St. Bernard), who has a few connections to USC.

Thompson grew up in San Diego before moving to the Los Angeles area, where he attended Calabasas High School as a freshman and sophomore, before transferring to Playa Del Rey this offseason. Thanks to where he grew up, Thompson is plenty familiar with the San Diego-to-USC connected running backs, including Marcus Allen, Reggie Bush and now Kenan Christon.

Thompson spoke with USC running backs coach Mike Jinks this week and couldn’t quite believe what he was hearing.

“My reaction was shock,” Thompson said of hearing he’d picked up an offer from the Trojans. “It didn’t feel real to me until a few minutes after I’d posted it. It was definitely shocking, and I was kind of surprised.”

The 5-foot-9, 180-pound back said Jinks gave him a brief breakdown of what he liked about his game and they spoke for a bit about Jinks’ background and coaching history. Thompson said Jinks echoed a lot of what he’d heard from other coaches when it comes to what they like about his on-field performance.

“Something coaches have told me I’ve done well is catch the ball out of the backfield,” Thompson said. “I’m good at winning one-on-one matchups against linebackers and I have the ability to make people miss in the open field. I also take price in not fumbling. That’s a goal for me every year, to finish without fumbling.”

USC has plenty of talent at running back for the 2020 season, in Stephen Carr, Vavae Malepeai, Quincy Jountti, Markese Stepp and Christon. But there is a long injury history with several of them, as the Trojans were without Carr, Malepeai and Stepp simultaneously for several games last season. USC will lose Carr, Malepeai and Jountti following the season and Stepp is a draft-eligible sophomore. That makes adding depth to the position incredibly important in the 2021 class, and the Trojans will likely need at least one more in the 2022 class.

While he checks in well under six feet tall, Thompson isn’t just a speed back or slasher, as he brings a physical nature to his game as well, able to break tackles and gain yards after contact. In that way, he has some similarities to Christon, with whom Thompson is plenty familiar.

“I’ve seen him a whole bunch of times,” Thompson said of USC’s sophomore running back. “Me and him went at it in track a few times. He was always over in Lane 4.”

Last season, Thompson was able to attend a USC game, as he was in Tempe when the Trojans traveled to take on the Arizona State Sun Devils. Christon was instrumental in that game, rushing for 62 yards and catching four passes for 82 yards and two touchdowns, including a 58-yard catch and run.

“Kenan absolutely balled out,” Thompson said, adding that Christon’s long catch out of the backfield stuck out as a memory. “I can see myself doing that.”

The other major connection USC now has with Thompson exists in Chris Claiborne, who recently became an Offensive Quality Control Analyst for the Trojans. Claiborne served as Thompson’s head coach at Calabasas the past two years—where Thompson also played for offensive coordinator and former USC wide receiver Curtis Conway.

“That’s huge,” Thompson said of Claiborne joining the USC staff. “Me and him have a great relationship.”

USC also welcomed Bush back into the fold recently, and he’s another former Trojan who could have an impact on Thompson, especially if USC coaches can find a way within NCAA rules to utilize Bush as a recruiting asset.

“That would be huge,” Thompson said, adding that Bush is one of the backs whose brains he’d love to pick in terms of what he’d see on the field and his thought process throughout each carry.

Ultimately, Bush ranks No. 2 on Thompson’s list of tailbacks, as the guy he likes to watch most is former Georgia Bulldog and current Detroit Lions running back D’Andre Swift.

Thompson picked up his first offer at the end of his freshman season, but there was a lull after Colorado became his third offer. Things picked up in a big way again this past spring. Oregon State extended an offer on May 6. Over the next two weeks, Thompson had added offers from Arizona State, Kansas, New Mexico, Oregon, Penn State and San Diego State.

Alabama, Oregon and USC were three schools he mentioned that he grew up following, so the offer from the Trojans was a big one. But Thompson is in no hurry to rush through his recruiting process. Right now, he’s focused on what should be a very interesting season at St. Bernard. The Vikings went 4-6 last season as they competed in Division 13, but that’s unlikely to happen again. Former Narbonne head coach Manny Douglas has taken over at St. Bernard’s and a number of transfers–including Thompson’s former teammate at Calabasas, four-star athlete Larry Turner-Gooden–will join Thompson this year in making this is a very talented roster.

“We all know each other through football and getting to play with these guys is super cool,” Thompson said.