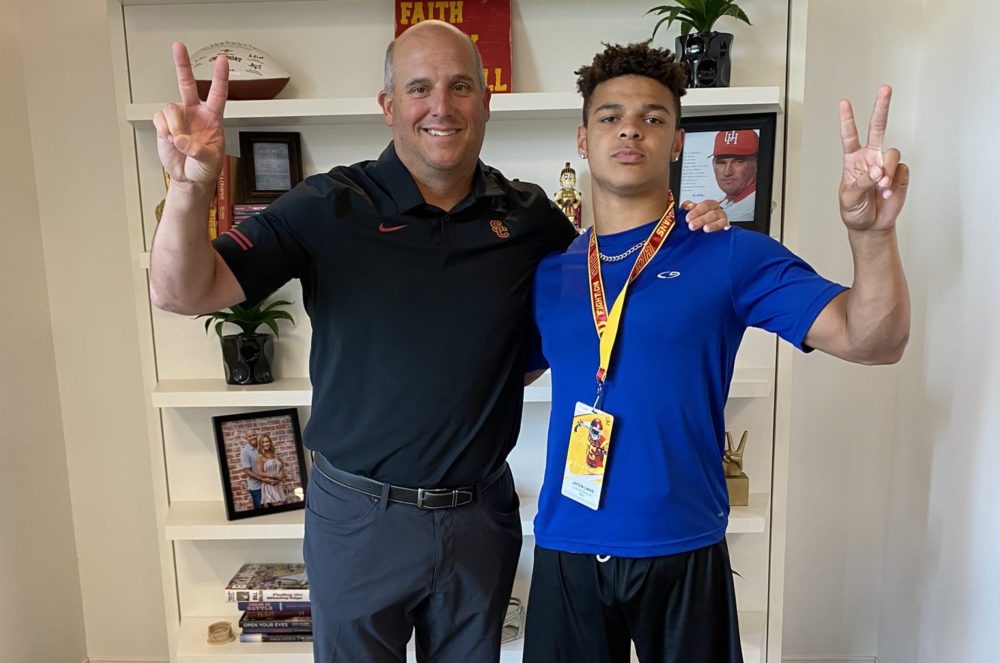 The running back position in the 2022 recruiting class is going to be a fascinating spot to watch for USC with a number of prospects still in play and two transfers having just come in. That same spot in the 2023 class got a new target on Wednesday, when the Trojans extended a scholarship offer to four-star back Jayden Limar (Lake Stevens, Wash./Lake Stevens) during an unofficial visit.

The 5-foot-11, 190-pound back is as physically gifted as they come at this stage. He’s posted a 42-inch vertical, 4.45-second 40 and a 10’7″ broad jump. During a shortened sophomore season, he rushed 44 times for 569 yards and seven touchdowns, to go along with eight receptions for 147 yards and two additional touchdowns.

He’s a physical back with terrific speed and getting things done with the ball in his hands is something in which he takes pride as a running back.

As for something he’d like to improve on over the coming years, he said that while he feels comfortable attacking safeties in the secondary and physically overpowering them at the high school level, he knows that ultimately the ability to make moves in the secondary and make defenders miss in space will be more beneficial down the line.

He’s picked up offers from Oregon and Texas A&M recently, and was pleasantly surprised when the offer from USC came during the visit.

USC was hosting two official visitors during his trip, but running backs coach Mike Jinks found a little time to sneak away in order to speak with Limar while the group of unofficial visitors was going through their in-uniform photo shoot. Limar said Jinks also spoke to his father and coach over the phone and let them know about the offer, letting them know he’s looking forward to continuing to build this relationship.

“They said they’ve been watching my tape for a while and love the way I play,” Limar said, adding that the one caveat to the offer is that Limar keeps his grades up, something that shouldn’t be difficult for a student-athlete with a 3.6 GPA. “I know it’s a very prestigious school.”

Limar was one of three players from his FSP group, the other two being 2023 five-star defensive end Jayden Wayne and 2023 four-star cornerback Caleb Presley, who had an opportunity to visit with head coach Clay Helton in his office during the visit. Limar said the visit jumpstarted the relationship-building process that goes with recruiting, and he also hit it off with a couple of other USC staffers, including defensive quality control analyst Brett Arce and director of recruiting strategy Marshall Cherrington, a fellow Washington native.

“Coach Arce, that’s my guy,” Limar said. “He was with us for the whole recruiting time.”

The tour consisted of meetings with coaches, a campus tour and a tour of the football and athletic facilities, including the weight room and nutrition bar. Limar had an opportunity to speak to the nutritionist and the strength coaches to get a better understanding of USC.

Limar had an opportunity to compare USC to the previous visits he’s taken in recent weeks, including trips to Alabama, Texas, Texas A&M and other schools in Texas and the southeast. Limar said the USC visit stood up to any of the others.

“It definitely had a lot of the same aspects,” Limar said. “I feel like the facilities are all kind of the same. I know the SEC has what they have down there, but everybody has really nice stuff. That’s just how it is. I think the people inside are going to make the difference.”

Limar isn’t close to narrowing down his list of options at this point and said he’ll wait until after his junior season to begin the process. But he does know what is going to set schools apart.

“A family environment and if they care about life after football, not just getting you in to win games and then getting you out,” Limar said of the most important things he’ll be taking into account. “And the coaches care about you as a person.”

It wouldn’t be surprising to see USC stick in the race for Limar. This was his first time on the USC campus and he left impressed.

“The campus, everything about it is clean cut and nice. Everything pops,” Limar said. “There’s nothing you see and wish it was different. Everything is top of the line. And the weather is obviously amazing down there.”