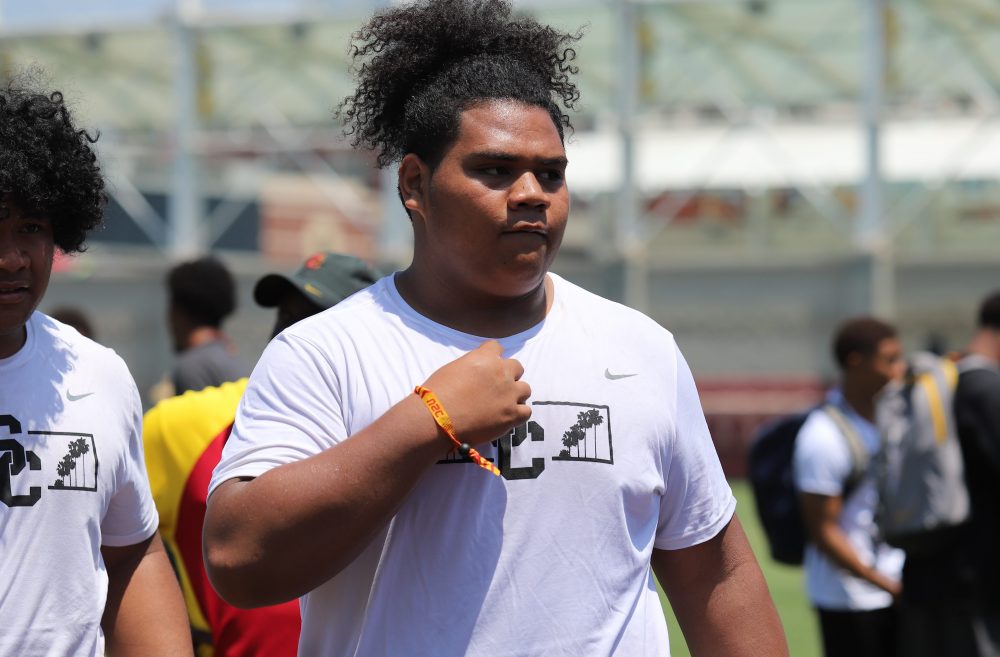 Trojans true freshman defensive tackle Jay Toia (6-3, 325), who had made such a positive impression during spring practice and was in the mix for at the very least a starting spot, finally has broken his silence after declaring for the NCAA Transfer Portal last week.

Here is the explanation tweet that Toia sent out on Monday:

“A week ago today, I made one of the toughest decisions in my young life as a 17-year-old…I entered the transfer portal from my childhood dream school USC Trojans. The 2020 pandemic was tragic to so many that lost so much. For me and especially my parents, we felt forced to make a major decision signing with USC based on limited information because of Covid19 restrictions. We were not able to take any official or unofficial visits to any of the other schools on our short list such as Michigan, Utah, UCLA, Miami among others.

“I, as well as my family, are truly thankful for the USC staff and students for all the support this past semester. Although I earned all A’s last semester at USC as an early enrollee and worked myself into the 1’s and 2’s deep rotation during spring ball, we as a family felt it was important to really take a closer look at my options regarding my short term and long term future.

“I have major respect for USC, but I owe it to myself and my family to reevaluate my current situation. A special thank you to coach Helton for all his support through this process. Thank you kindly Trojan family and Tu’a ‘Ofa-Atu.”

The loss of Toia would be a major blow to the Trojans’ defensive line depth, which already has lost Brandon Pili (Achilles) and transfer departures Caleb Tremblay (Tennessee) and Connor Murphy (UNLV).

Trojans head coach Clay Helton was ecstatic with the progress of Toia at the completion of spring practice.

“The other guy that really stood out to me was Jay Toia and just how far he has come from day one. I wish everybody could have seen him day one, when he stepped on campus compared to where he is at right now. It is literally night and day,” Helton said.

The coach added, “But he is somebody that you know, when he is put in a competitive drill or live drill, you’re talking about off the field is the sweetest human being you’ll ever meet. I don’t know who he becomes, when it’s a competitive situation. He is a different person, and it’s been really neat to see how talented he is but also the unbelievable sense of urgency that guy has to help this team next year.”

With the probable departure of Toia, the Trojans will look to young players like Jamar Sakona, Kobe Pepe, Dejon Benton, and redshirt Stanley Ta’ufo’ou to fill the void. The Trojans are also heavily counting on Alabama transfer Ishmael Sopsher, who did not participate in spring drills due to leg surgery rehabilitation.