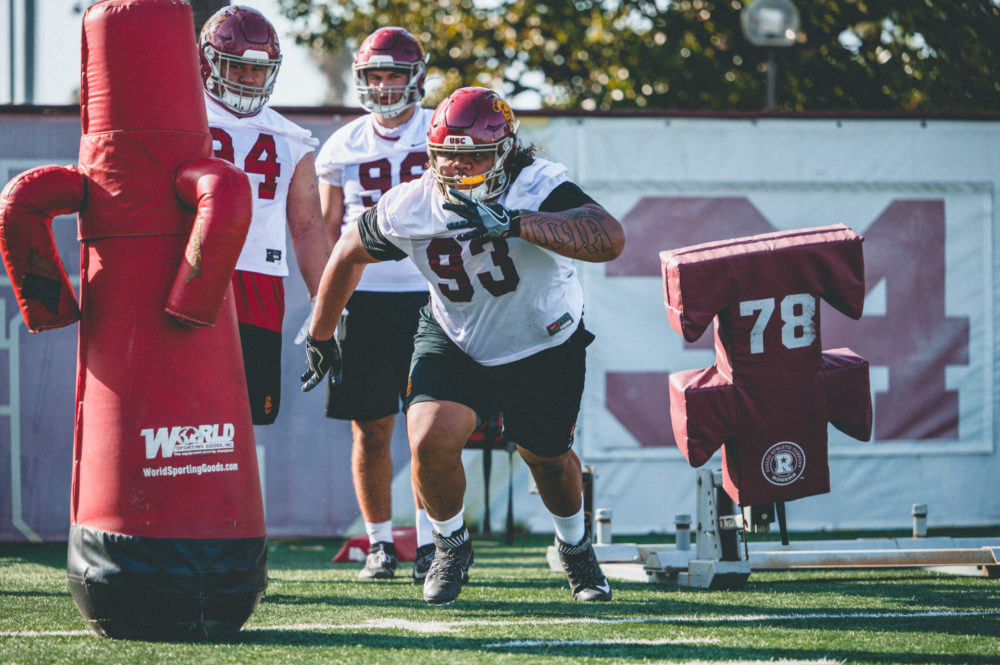 As it turns out, USC will see plenty of defensive tackle Jay Toia over the next few years. After turning in one of the standout performances of spring ball for the Trojans, the true freshman early enrollee elected to enter the transfer portal in late May. And on Tuesday night, Toia announced that he will join the UCLA Bruins.

Losing Toia is a major hit to the defensive line for the Trojans. He established himself as a likely contributor this season and if he continued progressing at the rate he showed over five weeks of spring ball, could have been in line to start this fall. Seeing him wind up at UCLA is adding insult to injury.

It Is Done! 💯 ALL GLORY TO GOD!!! pic.twitter.com/NyNeu7vFlC

After entering the portal, the expectation was that Toia would wind up at UCLA, where Johnny Nansen, who recruited Toia to USC and still has a strong relationship with him, serves as the defensive line coach.

This is an illustration of how easy the transfer portal has made it for players to pick up and leave a program, and it definitely hasn’t cleaned up the potential and likelihood for tampering, even though one of the requirements for a transfer is to “certify in writing, along with their new head coach, they did not have direct or indirect communication with the new school’s athletics staff prior to entering the NCAA Transfer Portal.”

USC will have some serious questions to answer at the defensive tackle position now. There were strides taken by Jamar Sekona this spring, but Kobe Pepe sat out much of spring ball with an injury, incoming Alabama transfer Ishmael Sopsher missed the entire thing while recovering from compartment syndrome surgery and veteran Brandon Pili was lost for the year due to an Achilles injury. If Sekona, Pepe and Sopsher are healthy and playing at a high level this season, the Trojans might be fine. But all three are young players who don’t have much experience. USC could also look to move De’jon Benton back to the inside after he moved outside to defensive end this spring. Incoming defensive linemen Korey Foreman and Colin Mobley are outside players, though Mobley could have the frame to bulk up and move inside — but might be unlikely to contribute there this season.

The Trojans could turn to the transfer portal again for help inside. Obviously, things can change in a hurry in terms of players becoming available and moving programs. Pili, Toia and Caleb Tremblay, who transferred to Tennessee and had the frame and experience to help inside if needed, are big losses as far as depth is concerned. A veteran player from a Group of Five program or lower-division school wouldn’t be the worst use of a scholarship this season. Though clearly the Trojans would aim higher if the portal route is indeed a path they choose to go.

Toia is a young talent that joins a veteran, experienced group in Westwood. According to ESPN, the Bruins return 91% of their 2020 production this season, a mark that puts UCLA second in the country. UCLA brings back 95% of its offense and 88% of its defensive production. USC ranks 67th in returning production, at 69% for both offense and defense.