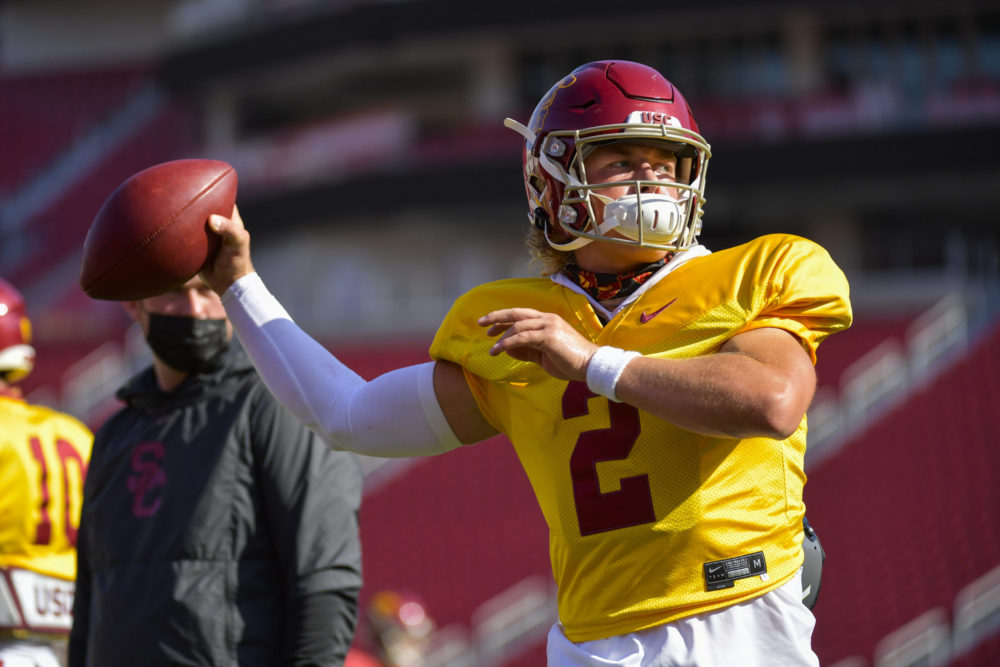 Even after several months on the USC campus, the high school awards keep rolling in for Trojan quarterback Jaxson Dart.

On Thursday, the 6-foot-3, 210-pound quarterback was named the Gatorade Player of the Year for the state of Utah. Dart had one of the all-time great senior seasons this past fall, leading his Corner Canyon Chargers to a 14-0 record and state title. He completed 70% of his passes for 4,691 yards and 67 touchdowns against just four interceptions. Dart also ran for 1,195 yards and 12 touchdowns on 128 carries. And he carried a 3.98 GPA while doing so.

Dart won’t be a true freshman starter in Game 1 for the Trojans this fall the way Barkley and Daniels were, but he was very impressive this past spring and appears on track to be in the mix as a USC starter at some point in his career. With Kedon Slovis entrenched as the starter and walk-on veteran Mo Hasan out for the season with a torn ACL, there is a competition between Dart and fellow true freshman Miller Moss to be the backup this season and potentially one snap away from significant playing time.

Elsewhere, a couple of USC recruiting targets took home their respective Gatorade State Player of the Year awards as well.

In Colorado, the nod went to 2022 five-star running back Gavin Sawchuk, from Valor Christian High School. The 5-foot-11, 180-pound back ran for 1,239 yards and 17 touchdowns as a junior this past fall. Sawchuk is considering USC and took a fairly recent unofficial visit to the campus. Oklahoma is a school that is standing out to Sawchuk, though many programs are recruiting him hard. Fellow running back Christian McCaffrey won the state player of the year award twice (2013 and 2014) out of Valor Christian.

In California, the award went to a sophomore, in 2023 quarterback Malachi Nelson. The 6-foot-3, 180-pound, five-star quarterback led Los Alamitos to to a 6-0 record this spring, throwing for 1,513 yards and 23 touchdowns in completing nearly 74% of his passes. There is an interesting recruiting dynamic with Nelson. He was USC’s top (and only) target at the position for a long time, but as the recruiting cycle played out, the Trojans also extended an offer to 2023 quarterback Nico Iamaleava (Downey, Calif./Warren). Nelson is looking hard at Oklahoma as well as USC, and others, and the Trojans need to make sure they land one of those two local standout quarterbacks.